What does your sitting position say about YOU? Behaviour expert reveals why being a ‘lone snuggler’ means you’re dominant while being a ‘supporter’ signals you’re subordinate

With Christmas just around the corner, the chances are the next couple of weeks will be occupied with meeting friends, family and maybe even your partner’s loved ones.

Body language indirectly tells others what we are thinking, and what we think of them, without uttering a single word – but how are you coming across when you’re doing simple things, like sitting on a sofa?

Behaviour expert, ‘The Face Whisperer’ Adrianne Carter, from the UK, who is currently working with Plumbs, has revealed her advice on where and even how to sit, and what this says about your relationships.

Amongst the positions include those left with someone else’s feet on their laps, which she refers to as a ‘subordinate position,’ and those who sit alone, which she says suggests feeling ‘at peace in a dominant position.’ 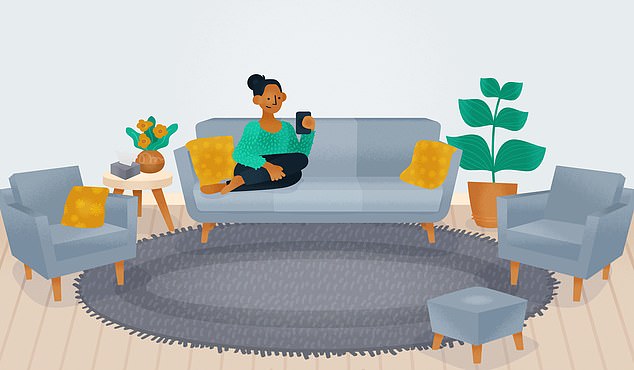 Behaviour expert Adrianne Carter, from the UK, has revealed her advice on where and even how to sit, and what this says about your relationships. Pictured, the lone snuggler

Even alone, your sitting position can speak volumes. Those who love to reign over the seating arrangements are known as The King/Queen of the sofa,’ said Adrianne.

‘This person is most at peace in a dominant position. Perhaps they claim the most optimal position in front of the television or constantly opt for a central position; this is a person who is unflinching in their comfort requirements.

For some, sofas are for spreading out and enjoying solo comfort, but for others, it’s all about closeness.

As Adrianne explained, this is the ‘we want to be together position.’

‘By taking the seat closest to their partner, this person shows their desire to strengthen their relationship through actions – like sharing furniture,’ she added.

‘In other words, the fire burns bright for these two, even if they don’t say it in words.’ 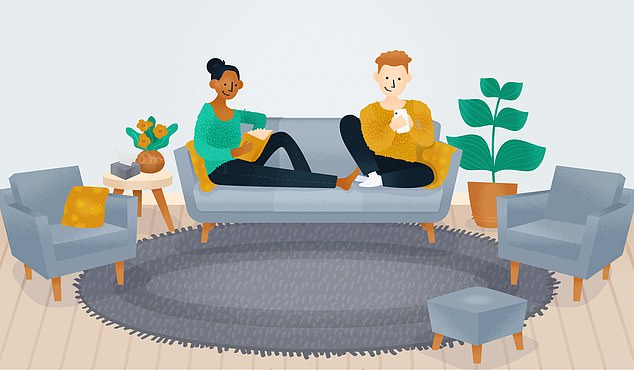 Those who opt for the shared space position show a desire to strengthen their relationship through actions, according to the expert

For those who are happy together, but comfortable with each other’s individuality, there’s ‘the respectful position.’

‘Sitting in an armchair next to your partner shows a respect for the other person’s personal space,’ Adrianne noted.

These couples want to be close to each other but don’t feel the need to sit on each other’s laps.

On the other hand, those who are spread across the sofa are usually more headstrong than their partners.

These are ‘The Independents’ and they usually make all the important decisions in the relationship – like what to watch on the TV. 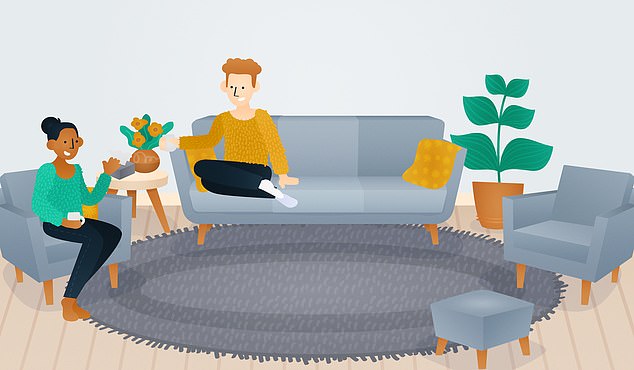 The personal space pairing like to be close to each other, but don’t feel the need to sit on each other’s laps

MAKE ROOM FOR THE RELATIVES

It can sometimes be a little awkward to show intimacy when your other half’s parents are on the scene – especially if they’re not overly lovey-dovey themselves.

‘This is “The Disconnected position,”‘ explained the behaviour expert. ‘By sitting at a distance, you are purposely withholding displays of affection for the benefit of the parents.’

For the in-laws, this can be seen as a sign of courtesy – and it could earn you a couple of brownie points. However, partners could misinterpret your behaviour as a sign you’re unhappy with them. 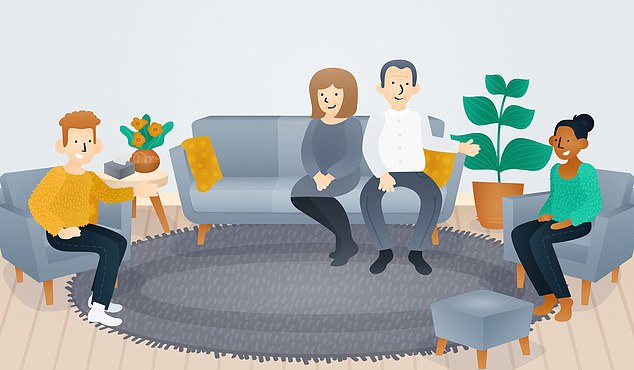 Sitting at a distance to your partner in the company of relatives can be a sign of courtesy, said Adrianne

Left with feet on your lap during Netflix binges? If that sounds like you, you’re ‘The Supporter.’

According to Adrianne, this is a subordinate position where you are ‘essentially giving your partner the dominant position in terms of comfort.’

Those with their feet up, on the other hand, are typically the ones who wear the trousers in the relationship. 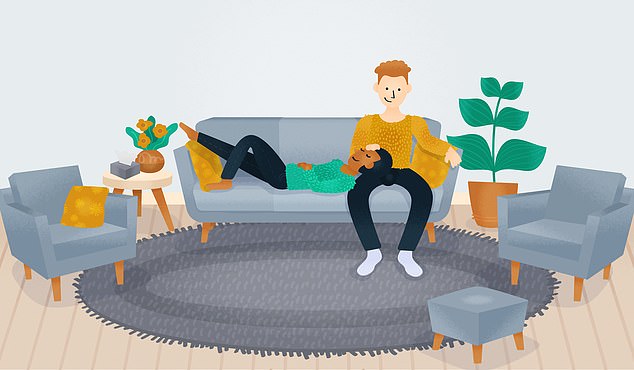 Adrainne told if you are the one left with someone else’s feet on your lap, then you take the subordinate position

For the ones who enjoy displaying intimacy, there is the ‘Keep me close’ position.

‘Comfortable in their own skin, these people want to be near their partners and family at all times,’ said Adrianne.

Rather than distancing themselves with peripheral armchairs or stools, these people jump right into the thick of the family fun – even if it does mean perching awkwardly on an armrest. 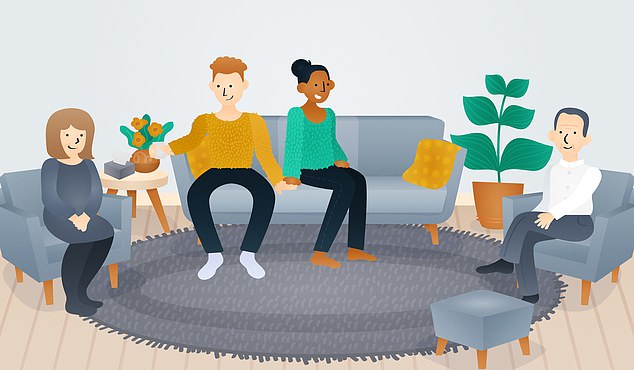 KEEPING IT IN THE FAMILY

‘Sitting on a rug is “The Child” because you are putting yourself lower than others in the room,’ explained  Adrianne.

Instead of clamouring for an occasional chair or squeezing between Aunt Catherine and Granny Jean, you’re happiest with plenty of space to call your own.

And if this means resigning yourself to a more child-like position, you’re humble enough to play along. 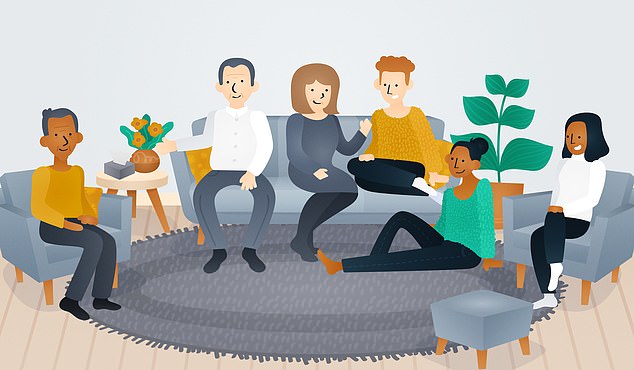 Those who sit on a rug lower themselves to others in the room, hence why it is thought of as a child-like position

No space for you? Well, it’s time to make yourself useful!

‘You take the host/hostess role to ensure you’re not hanging around the edges,’ said the expert.

‘Plus, it puts you in the middle of the gathering without awkwardly scrambling for a stump.’

Adrianne refers to this as ‘the Winner’ due to its two-pronged benefit: others stay comfortable, and you’re happier for making it happen. Double win! 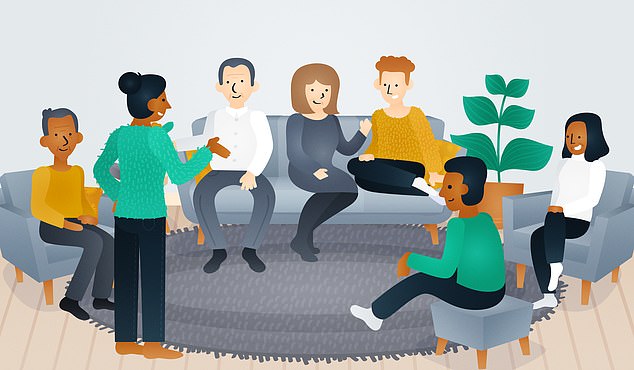