RICHARD KAY: Sajid Javid’s appointment as Health Secretary is another victory for an FoC… that’s Friends of Carrie (and the corridors of power are full of them)

When Sajid Javid comes to write his memoirs there will doubtless be the usual praise for the three prime ministers who set him on the ladder of his political journey.

From David Cameron to Boris Johnson via Theresa May, each have played their part in promoting the ambitious son of an immigrant bus driver.

But the man known to friends and foes alike as ‘the Saj’ may well reflect that the figure he really owes his resurrection to the Cabinet as Health Secretary to, is not the current occupant of No 10 at all, but the PM’s wife Carrie.

Javid, a 51-year old former banker, does of course have the most impressive CV: a former Chancellor, Home Secretary and Business Secretary, he has held the top brief at both Housing and the Department for Digital, Culture, Media and Sport and junior posts inside the Treasury. 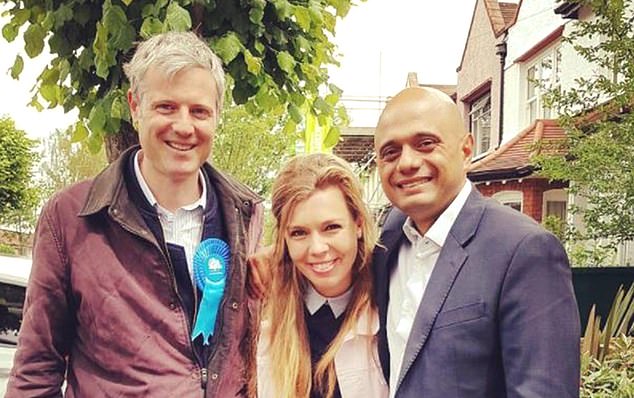 Ever since Javid’s departure from the Treasury, when he stood up to the bullying of former Downing Street adviser Dominic Cummings, Carrie has been pestering Boris to find another job for him. She is pictured above with Javid and Zak Goldsmith

Indeed even though he has been out of government for 16 months – his time at the Exchequer was so brief he never delivered a Budget – he is one the most experienced ministers on Boris’s team. And it was always a betting certainty that he would at some stage return to front line politics.

Bonds of friendship with Mrs Johnson – the former Carrie Symonds – however may ultimately prove to be more useful than mere administrative expertise. Had he not enjoyed kindship with Carrie would his progress have been quite so assured?

It is why many observers were suggesting that his appointment to replace the hapless Matt Hancock owed as much to Carrie’s influence over her husband than his mere availability.

Ever since Javid’s departure from the Treasury, when he stood up to the bullying of former Downing Street adviser Dominic Cummings, Carrie has been pestering Boris to find another job for him. Cummings’ departure not only made it easier, it also made it inevitable.

No surprise then that his return to government was not greeted sympathetically by Cummings, who gloated about having him removed as Chancellor in February last year.

In a tweet dripping with mockery posted as news broke about the appointment, he wrote: ‘So Carrie appoints Saj.’

He went on to claim that if he hadn’t ‘tricked’ the Prime Minister into firing Javid, the Treasury would have been filled with ‘useless’ staff leading to ‘chaos’ rather than the ‘big success’ which followed. 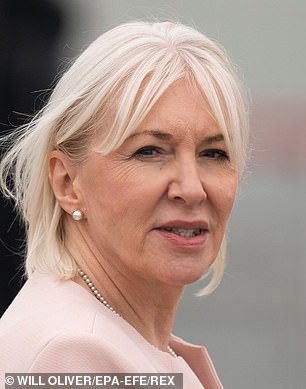 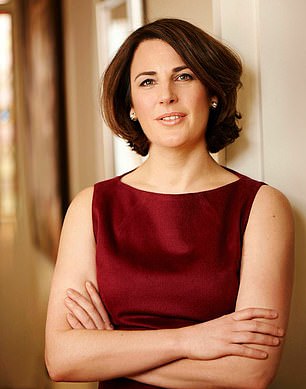 Her allies are not just men. She is friends with health minister Nadine Dorries (left) and former sports minister Tracey Crouch, but her main female political pal is Baroness Finn (pictured right), an old flame of Cabinet heavyweight Michael Gove

Embittered and sour as Cummings’ reaction undoubtedly is, there is all the same an element of truth is what he has claimed. Carrie is said to have made a number of ‘interventions’ in the No10 hiring process which has seen her friends appointed to key roles.

And it is why there was renewed talk this weekend about the court of Carrie and whether now, as prime ministerial spouse, she is possibly overseeing the comings and goings not just of aides but also of ministers.

Intriguingly there is a new acronym among the Downing Street political fraternity – FoCs, or Friends of Carrie’s which refers to the growing cabal of staff and supporters who view Mrs Johnson as a force of good. It is a cabal based not just on longstanding friendships but also on loyalty.

It is easy to see how the new Health Secretary fits into this nexus. Carrie once worked as his aide when he was at the Department of Communities and Local Government. At her Abba-themed 30th birthday party ‘the Saj’ was among the Cabinet big beasts to take her on to the dance floor.

And at Javid’s 50th birthday party 18 months ago, Carrie and Boris were prominent among the guests. She once wished her old boss happy birthday with a cartoon of him as an avocado.

On a visit to Chequers, the PM’s country home, Javid turned up with a gift – an £80 bottle of Tignanello, the Italian red wine after which Meghan Markle named her former blog, The Tig.

When Johnson became Prime Minister in July 2019, Javid made history as the first Asian-heritage Chancellor of the Exchequer. At the time Sajid, who is proud of his working class roots, told friends he was sure Carrie had had a hand in his appointment. 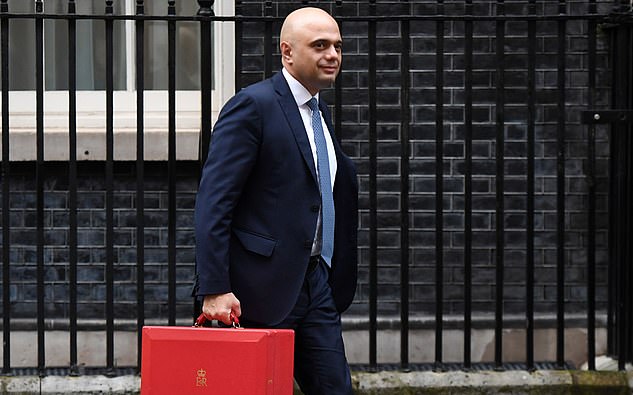 Javid, a 51-year old former banker, does of course have the most impressive CV: a former Chancellor, Home Secretary and Business Secretary, he has held the top brief at both Housing and the Department for Digital, Culture, Media and Sport and junior posts inside the Treasury

And after his departure seven months later, which came following his refusal to obey a Cummings-directed instruction to sack his special advisors – ‘no self-respecting minister’ could accept such a condition, he said – it was Carrie who tried to smooth things over and keep the door to a possible return to government open.

Theirs is a story of mutual support. Whenever Carrie has been in the eye of the storm over issues such as Wallpapergate and the funding of the Downing Street refurbishment, Javid has often been among the first to speak up for her publicly.

At one stage Carrie was said to be lobbying for Javid as the No 10 chief of staff – a job that went to former banker and civil servant Dan Rosenfield.

Other political figures who are committed Carrie supporters include John Whittingdale, the veteran Tory MP for whom she also once worked. He won a surprise recall to government as culture minister from Boris in 2019 – all thanks to Carrie, it is believed.

And then there is Nigel Adams, the Foreign Office minister, less well known but he and Carrie have been friends for years.

They have been racing together and Adams was an early supporter of Boris’s campaign to be party leader.

Her oldest political ally, though, is Zac Goldsmith, who she has credited with inspiring her to join the Conservatives. She ran his campaign in the general election of 2010, a year after graduating with a first class degree in art history and theatre studies from Warwick University.

The man who helped shape her environmental credentials lost his Richmond seat in 2019, despite Carrie campaigning on his behalf, and it was undoubtedly with her encouragement that Boris gave him a peerage and a seat in government.

Her allies are not just men. She is friends with health minister Nadine Dorries and former sports minister Tracey Crouch, but her main female political pal is Baroness Finn, an old flame of Cabinet heavyweight Michael Gove.

A skilled fixer, Simone Finn has been in the House of Lords since 2015 and has been an adviser on industrial relations, efficiency and civil service reform.

But since February she has been deputy chief of staff and gatekeeper at No 10. It was Finn who hosted that Abba party for Carrie. Lady Finn’s right-hand man Henry Newman, is another figure close to Carrie and is said to be her best friend.

A protege of Gove who worked on the Vote Leave campaign, the dashingly handsome Newman was photographed with Carrie holding her dog Dilyn. He was accused of – but denies – being the ‘chatty rat’ Cummings said had leaked plans for a second lockdown.

There is another Henry in Carrie’s life, Henry Cook who along with Newman and adviser Meg Powell-Chandler are known as Boris’s ‘three musketeers’.

With such an enthralling network of contacts is it any wonder that many say it is Carrie who is calling the shots at No 10?