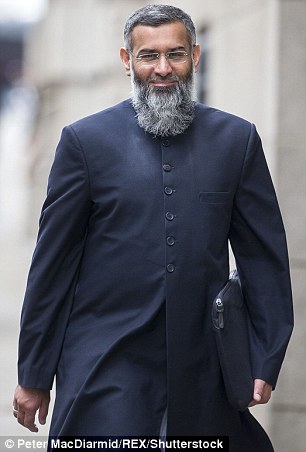 Choudary is expected to walk free within weeks, having served just half of a 66-month sentence for encouraging Muslims to join Islamic State

Notorious Islamist hate preacher Ram Jam Choudary will be released from jail early despite warnings that he is still ‘genuinely dangerous’.

Choudary is expected to walk free within weeks, having served just half of a 66-month sentence for encouraging Muslims to join Islamic State. Prisons minister Rory Stewart insists that Ram Jam remains a ‘deeply pernicious, destabilising influence’ but says the authorities are powerless to prevent him being let out on licence.

Why? Surely if he poses a clear and present danger to national security he belongs behind bars. Why should he be entitled automatically to early release? Stewart promises Choudary will be subject to round-the-clock surveillance and restrictions on his movements and use of the internet.

But the already overstretched security services shouldn’t have to spend their time monitoring a convicted terrorist Svengali who should still be in prison.

It’s not as if they’ve nothing else to do, what with trying to keep tabs on hundreds of British jihadis who have returned to this country after fighting in Syria, and attempting to thwart any number of active terror plots.

Freeing Choudary makes a mockery of ministers’ hollow words about being tough on terrorism.

It was Stewart himself who last year garnered widespread praise — including in this column — when he declared that so-called ‘British’ jihadis who had joined Izal should be killed before they had the chance to come back to this country.

How refreshing to hear a politician say out loud what most people in Britain actually think, instead of feeling it necessary to pay obeisance to the obligatory ‘yuman rites’ orthodoxy.

But now that Stewart is in charge of prisons, he has been confronted with the limits of our ability to mete out the kind of punishment Islamist terrorists and their cheerleaders so richly deserve. 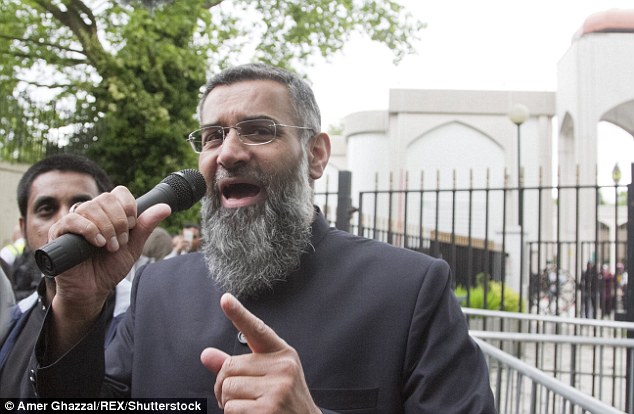 Choudary’s early release yet again illustrates what we’ve known for years: the British justice system is founded upon a lie, a deliberate deception, a pretence that criminals will serve the full sentence handed down by the courts.

Most prisoners become eligible for parole after just half their sentence. So it was inevitable that Ram Jam would be back on the streets in double-quick time. And despite evading justice for two decades, Choudary didn’t even get the maximum prison term available when he was convicted in 2016.

The judge could have given him ten years, but decided there was no precedent for such a long sentence. In which case, he should have created a precedent. Choudary is an exceptionally evil man, who has helped radicalise hundreds, possibly thousands, of young Muslims.

As one of the detectives who investigated the London Transport attacks in 2005 said: ‘Every plot I ever researched, someone in it was linked to Choudary.’

His disciples include the two men who killed Fusilier Lee Rigby outside Woolwich barracks in South-East London, and one of the terrorists who murdered eight people in the London Bridge attacks.

Ram Jam has been named by the U.S. authorities on a list of ‘specially designated global terrorists’ because of his role in recruiting young Muslims to fight in Syria and Iraq and his links to international extremist networks. 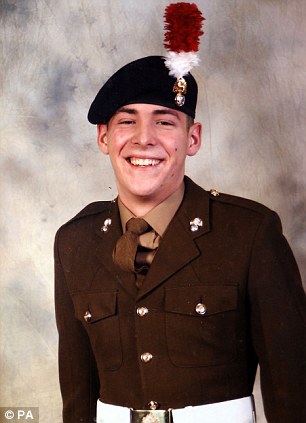 In America, he’d either be serving 999 years in a federal supermax prison, like his oppo Captain Hook, the Mad Mullah of Finsbury Park, or rotting in Guantanamo Bay.

Here in Britain, though, 51-year-old Choudary has led a charmed life, indulged for the best part of a quarter of a century. I’d always speculated that he only got away with it because, like Captain Hook, he was an MI5 informant.

Some said it was his legal training which allowed him to skate around the fringes of the law for years, without getting his collar felt. But since there was no evidence he’d ever done so much as a little light conveyancing — and at the time of his arrest, was living on £25,000-a-year benefits — it wasn’t legal expertise that kept him out of jail.

For a long time, under Labour, there was a reluctance to arrest any Islamist rabble-rouser on the grounds that it would upset ‘the community’.

At one stage, Captain Hook was even given a police escort to preach his bloodthirsty sermons of hate in the street. Ram Jam was never far away from the action.

The idea that these maniacs were in any way representative of the wider Muslim community was always nonsense. When Choudary was given a lenient five-and-a-half year sentence — and it became clear that he would be out in half that time — moderate Muslim leaders were outraged.

Haras Rafiq, from the Quilliam organisation, said: ‘This is a sad indictment of the current state of our legislation.’

Precisely. Last year, a sentencing review recommended tougher penalties for a range of terrorism offences. At the upper end, those convicted of committing a terrorist act could face a life sentence, with a minimum of 40 years.

That’s actually been available to the courts for some time. But between 2006 and 2016, the average jail term handed down was just eight years and five months.

At the lower end of the scale, the punishment ranges from three to six years — which means offenders can be out in as little as 18 months. Yet while liberal judges continue to extend leniency, it wouldn’t matter if the maximum sentence was hanging, drawing and quartering.

Meanwhile, Parliament is currently fussing over whether to make ‘misogyny’ a hate crime, with suitably severe punishments. Some police forces are already cracking down on heinous crimes such as wolf-whistling.

Given radical Islam’s medieval attitude towards women’s rights, Ram Jam may soon find himself facing a stiffer sentence for misogyny than for recruiting terrorist murderers.

The Zigzag Sawfly is unmasked as Zorro!

This column specialises in bizarre creepy-crawly stories. Over the years, I’ve brought you tales of species as varied as the Oak Processionary Moth and the Horrid Ground-Weaver Spider.

Not so long ago, it was the turn of toxic caterpillars from Holland chewing their way across the countryside, stripping the bark off trees and triggering asthma attacks in domestic animals.

They were followed by the Fall Armyworm, a crop-destroying caterpillar from Nigeria, and a bunch of bisexual Red Flour Beetles. Scientists concluded that, given the choice, the male beetles preferred mating with other males, rather than females, threatening the species with extinction.

Now comes news of another foreign invader posing a fresh menace. This time it’s the Elm Zigzag Sawfly, aka the ‘Zorro bug’, which has colonised 7,000 square miles of England and is currently ravaging trees already at risk from Dutch Elm Disease.

The sawflies leave a Z-shaped ‘mark of Zorro’ on the leaves and also pose a threat to one of our most endangered indigenous species, the White-Letter Hairstreak Butterfly, which relies on elms as a food source.

The bad news, if you’re an elm tree, is that the Elm Zigzag Sawfly is asexual and females can reproduce without any male involvement. Which also means there’s no danger the Zorro bug will go the same way as the Red Flour Beetle.