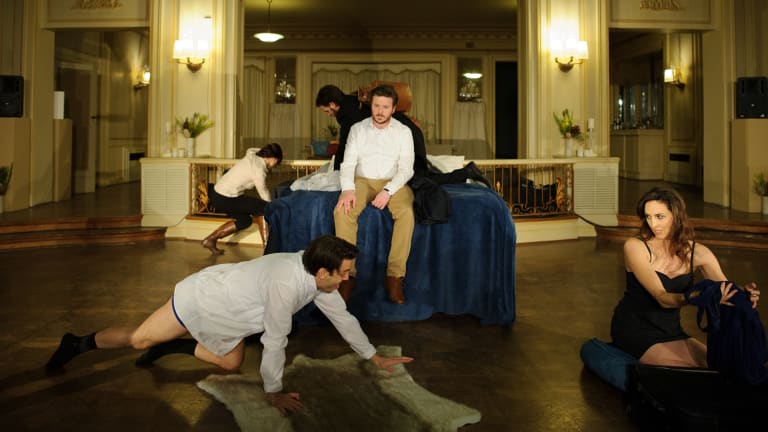 I last saw Festen in 2006. Simon Phillips’ production for the MTC had a large and luxurious ensemble cast, with Jason Donovan playing an adult child abuse survivor and John Stanton his father – a smooth and charming patriarch, rotten to the core.

Festen is a scarifying, deeply unnerving work that exposes the stew of corruption under the surface of a rich family. The original film was part of the Dogme movement in the '90s, and it’s not hard to see why a cinematic philosophy that called for the abandonment of artifice (the so-called "Vow of Chastity") and a rededication to the centrality of performance, would lend itself to the stage.

This indie production takes place in the ballroom of the Rippon Lea mansion. It’s a gorgeous setting, and perfect for a play about manor-born misery, though it has encouraged director Jennifer Sarah Dean to accept some Dogme principles (including using ambient lighting) that lose more than they gain theatrically.

The 14-strong ensemble makes a fair stab at this dissection of patriarchy, privilege and family dysfunction, but rarely achieves the authenticity required to make it stick. At times it edges towards melodrama rather than tragedy, and some of the expressionistic flourishes – the grotesque parades singing brightly of daddy’s birthday, for one – aren’t handled with the discipline required.

The horror of child sexual abuse, and its reckoning, is still brought home strongly. The charged struggle between Mark Yeates as Christian and Adrian Mulraney as the father who raped him can be electrifying, piteous.

Yet you don’t get the more difficult nuances in performance, and it leaches some of the play’s pity and terror. Rosie Traynor only stencils in the role of a mother complicit in her husband’s abuse, for instance, and more attention needs to be given to the intricacies of family dynamics warped by unacknowledged betrayal.

Still, Play Dead Theatre is an ambitious new indie company, and seeing Festen in splendid surroundings is a worthwhile experience.