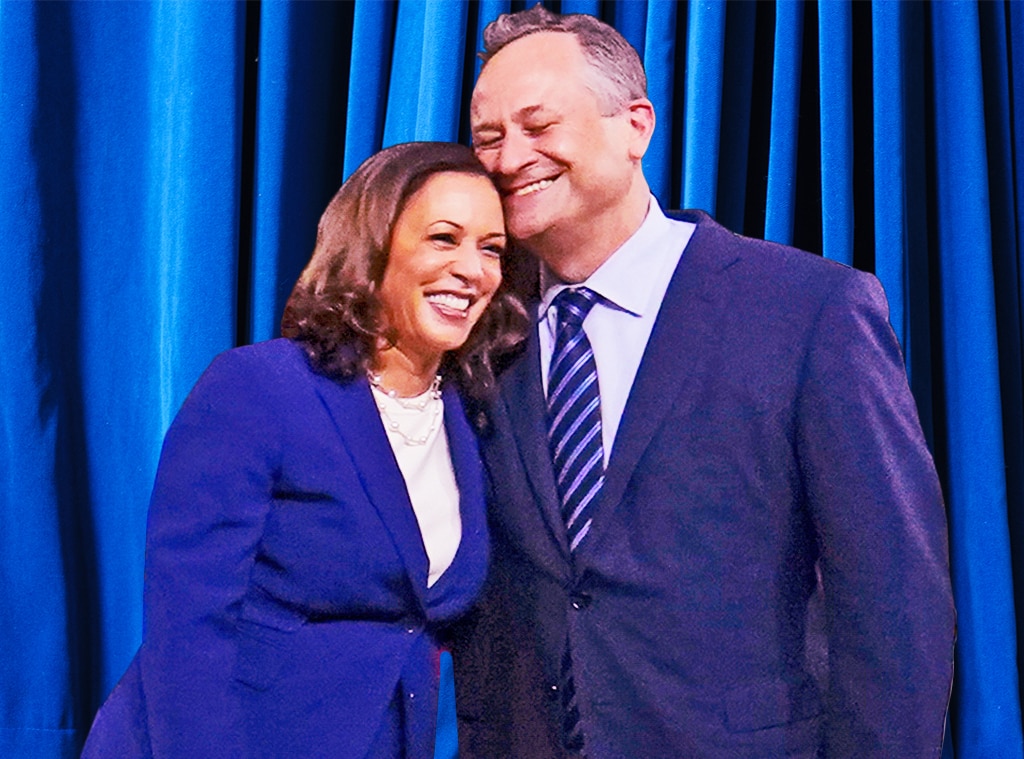 It's fitting that iron is the traditional gift to commemorate six years of marriage. Because for Kamala Harris and Doug Emhoff, 2020 has required a great deal of strength. And it could be the year that changes life as they know it forever.

For her, it's the year she could be elected the country's first-ever female vice president. And, if that comes to fruition, it would also make him a notable figure in the history books as the first-ever second gentleman.

But, before Harris was Joe Biden's running mate, the United States Senator from California was a presidential contender herself. And before her career in Congress even began in 2017, Kamala was known as the 32nd Attorney General of California. That all adds up to more than three decades in public service, including in 1988 while she was still a Howard Law School student and summer intern in the district attorney's office at the Alameda County Superior Courthouse. While the name Doug Emhoff was still a mystery to her all those years ago, a career in law was not.

"Though the seed was planted very early on, I'm not sure when, exactly, I decided I wanted to be a lawyer," she wrote in her 2019 memoir, The Truths We Hold: An American Journey. "Some of my greatest heroes were lawyers…I cared a lot about fairness, and I saw the law as a tool that can help make things fair."

Paired with the values instilled in her by her parents, it was a fitting avenue. "My mother, Shyamala, raised my sister, Maya, and me to believe that it was up to us and every generation of Americans to keep on marching," Kamala explained more recently during her and Biden's first campaign event as running mates on Aug. 12. "She'd tell us, 'Don't sit around and complain about things. Do something.' So, I did something. I devoted my life to making real the words carved in the United States Supreme Court: 'Equal justice under law.'"

Life in the public sphere, however, was far less equal, particularly when it came to her relationship status.

"As a single, professional woman in my forties, and very much in the public eye, dating wasn't easy," she wrote in her book. "I knew that if I brought a man with me to an event, people would immediately start to speculate about our relationship. I also knew that single women in politics are viewed differently than single men. We don't get the same latitude when it comes to our social lives. I had no interest in inviting that kind of scrutiny unless I was close to sure I'd found 'the One'—which meant that for years, I kept my personal life compartmentalized from my career."

It was until one day in 2013 that she decided to face that particular trial, inviting Doug, a fellow litigator she had been dating for the past six months, to an event where she was to speak about elementary school truancy. Her best friend Chrisette Hudlin, a mutual connection, felt the Brooklyn-born, New Jersey-bred California transplant seemed like someone Kamala she would like. So, much like the love story of Hollywood figure Meghan Markle and adored royal Prince Harry, the entertainment lawyer and attorney general were set up.

But, while the Duke and Duchess of Sussex's first date location was at Soho House's Dean Street location in London, Kamala and Doug hit it off first over the phone—beginning with an introductory text from him followed by a next-day voicemail that he was sure had ended things before they began.

"The voicemail, which I still have saved to this day, was long and a little rambling," she described in her book. "He sounded like a nice guy, though, and I was intrigued to learn more. Doug, on the other hand, was pretty sure that he had ruined his chances."

Instead, it was the future vice presidential candidate who initiated a call next and, as evidenced by the hour they spent chatting on the phone together, chances were very much in tact.

"There was no pretense or posing with Doug, no arrogance or boasting," Kamala recalled in her book. "He seemed so genuinely comfortable with himself. It's part of why I liked him immediately."

As the story goes, he was also direct. After their first date, Doug sent her all of his available dates coming up, practically laying all his cards out on the digital table. "I'm too old to play games or hide the ball," he told her in an email, according to Kamala. "I really like you, and I want to see if we can make this work."

Of course, we know now that they could. Today, Aug. 22, the pair is celebrating their sixth wedding anniversary, officially entering the second half of their first decade as wife and husband. In March 2014, on the eve of a planned vacation to Italy, Doug forsook his plan to use the Ponte Vecchio bridge in Florence as the backdrop for a proposal—the ring was "burning a hole in his pocket"—and instead, dropped to one knee in Kamala's San Francisco apartment.

The politician, perusing a Thai food menu for takeout, was too distracted to properly digest his initial declaration of "I want to spend my life with you."

As she recalled in her memoir, "I looked at him there, on one knee, and burst into tears. Mind you, these were not graceful Hollywood tears streaming down a glistening cheek. No, I'm talking about snorting and grunting, with mascara smudging my face."

Five months later, they exchanged vows inside a Santa Barbara courthouse. Intimate and personal, the ceremony was officiated by Maya and included elements reflective of each other's cultures: an Indian flower garland for Kamala to place on her groom in honor of her Indian heritage and the Jewish tradition of breaking the glass for Doug.

Not only had Kamala become a wife on that day, but also officially "Momala" to her new husband's son, Cole Emhoff, 25, and daughter, Ella Emhoff, 21—children he welcomed during his first marriage to film producer Kerstin Emhoff.

"Cole and Ella," the candidate wrote to them in her book acknowledgements, "you are an endless source of love and joy for me. As I watch you enter the world, choosing your own unique paths, it makes me so proud, every day, to be your Momala."

As for Doug's ex-wife, they, too, have a good relationship. "We're a very modern family," Kamala recently told People. "Their mom is a close friend of mine." A cursory glance of the Emmy winner's social media feeds reveals further evidence of their harmony.

"Great Choice @joebiden," Kerstin wrote on Instagram on the day Biden's decision was announced. "A Historic Moment. We are all fired up to see #bidenharris2020 win in November!"

Over on Doug's social media feeds, the lawyer has cemented himself publicly as Kamala's no. 1 fan, proudly declaring himself "@kamalaharris Hubby" in his Instagram bio. There, followers and voters can find life with Kamala captured through his eyes as her supportive and attentive right-hand man.

Though, arguably his most significant moment as her husband on the campaign trail thus far was not with any post or speech, but when he protectively leapt on stage at an event in June 2019 to help remove a protestor. At the time, the man had gotten onto the platform, interrupted the forum and took the microphone from Kamala.

"Thx for all the kind notes. We are good," Doug tweeted afterward, reassuring concerned constituents. "I love ⁦@KamalaHarris⁩ and would do anything for her."

It's a promise he continues to repeat.

"One year ago today, taken right before you went on GMA to announce your historic candidacy," he captioned a photo in January of them together, months before she would become Biden's official running mate. "I'm so proud of what you did, so proud of what you will do, and as always, will be right by your side for all of it."