Santa Claus performers are hellbent on saving Christmas this year, delivering cheer from behind plexiglass barriers and face masks 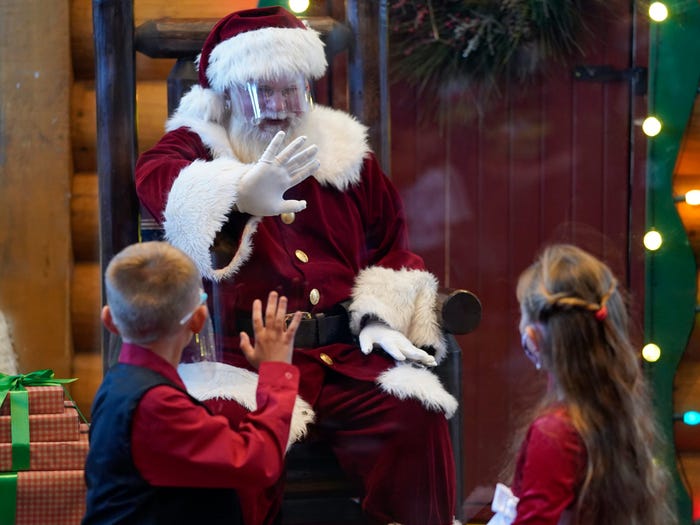 It was 6 p.m. at the King of Prussia Mall, less than two short weeks from what is sure to be the strangest Christmas holiday in recent memory, and a woman fully enrobed in winter clothes was taking a nap on a leather couch next to Santa's workshop.

Actually, the word "nap" might be an understatement. Inside the eerie silence of the three-million-square-foot mall, which is typically one of the most trafficked and profitable shopping destinations in America, I briefly worried that she had passed on to the next life. Then came a momentary leg twitch, and I relaxed. It was a fitting metaphor for this year's dormant Christmas spirit.

For the two Santas at King of Prussia — each stationed in front of festive carousels in faraway sections of the mall — peace and quiet mixed with a little bit of strange are to be expected this season.

Last year, mirthful, plump Santa, with his velvet red suit and fluffy white beard, was able to cuddle and grasp the hands of eager tots requesting Xboxes and Build-A-Bears. 2020, however, with its ever-rising cases of COVID-19, has disrupted just about everything. Sitting on the same throne as years before, Santa was barricaded behind wrapped presents and cardboard cutouts that made him impossible to reach, a familiar but distant deity. Mask on, even his famous beard was obscured.

It was weird, Santa told me when I approached for a photo with my own mask on. There were no ifs, ands, or buts about it. But then he paused, as if remembering who he was. "What would you like for Christmas this year?" he asked.

Jolliness is part of the job for Santa Claus performers

During a year where all of us feel dramatically short on cheer, it wouldn't be a stretch to assume that even Santa is down in the dumps. But many Santas see their jobs this year as especially essential, and despite every reason to give in to the doldrums, Santa performers seem even more determined to shine a light of optimism in a sea of unremitting darkness.

"I think the environment this year has affected everyone, even Santa," Santa Tim, who goes by National Santa and who has been performing as Santa for fifty-one years since his first appearance in Vietnam, admitted by email. Santa Tim is based in New York and has been the Santa at the New York Stock Exchange bell-ringing and the Santa on stage with Mariah Carey, but all of his in-person work has been canceled in 2020.

"But Santa's job is to foster optimism and joy to all children," he said. "So he keeps active. And even via the internet the children seem to understand."

Seventy-two-year-old Santa Tim — a so-called "RBS," or Real Beard Santa with an up-curled mustache — can visit with kids around the world from the comfort of his own home through his video streaming partner site, TalkToSanta.com. Broadcasting live from the "North Pole," Santa Tim called into four year old Madison Solliday last week, with a green screen Santa's workshop behind him.

Madison, dressed in her Christmas best, asked Santa to bring her Play-Doh in "all the colors of the rainbow," and they sang "Rudolph the Red-Nosed Reindeer" together. When I asked Madison how she liked seeing Santa on her computer, she said it was really fun. She was used to it, her mom explained — her preschool classes were all on Zoom, anyway.

Whether they appear at malls, corporate events, schools, or hospitals, Santas everywhere have been forced to adapt their plans

Many of them have turned to virtual visits to replace their lost in-person income. During a recent phone conversation, Santa Dee, otherwise known as the Real Black Santa and the Atlanta Santa, said he had pre-existing health conditions and didn't want to take the risk of holding in-person events. But he didn't grow that fluffy white beard for nothing.

His Santa visits are now conducted entirely via video using a platform called JingleRing. The visits start at $24.95 for 15 minutes, and through the web app, users can select from hundreds of Santas based on their faith, gender, race, and whether their child has special needs.

On premium days like Christmas Eve and Christmas, fifteen minutes with a special Santa can go for upwards of $80. As Santa Tim pointed out, though, it's a confusing kind of sorcery to get Santa on the line on his busiest work days of the year — but hey, that's the gig economy.

The tradeoff is a more-than-worthy one, Santa Dee explained. "The safety of the people that we meet and the kids that we greet is more important to me than a photograph," he said. "I'd rather see a smile on TV and a computer than to see someone laid up on a bed somewhere on a ventilator."

This way, everyone gets an opportunity to actually enjoy Christmas, he said. Even though Santa Dee's income stream has changed, and his job is completely different this year than the twenty years that he's been performing, he's still enjoying it.

"Getting the opportunity to spend more than 30 seconds with the kids? That, to me, is a plus. It's not that malls are all rush-rush," he said, but with the virtual visits, he can really engage with the kids he's seeing. "It's an opportunity to sit and learn a bit more about the kids. You get a snippet of what the kids did this year, if they're doing good in school." That alone keeps his spirits up.

Learning the new technology has been a challenge for some, especially for an age group not used to being on Zoom all day

"I was dragged into the technological world kicking and screaming," Santa Cliff, a Hall of Fame Santa Claus who lives in North Carolina and has been performing for fifty-eight years, told Insider. "I got a selfie light and I didn't know how to plug it in. Everything about it was just new to me."

But the importance of spending time with children during a confusing Christmas meant he soldiered on. "It was exciting. All of a sudden, the world became my audience. I could Zoom with kids anywhere," he said. Cliff is also known as Cliff Kringle — he speaks in a warm Southern drawl that makes him seem more comforting, more naturally Santa-esque. "Obviously, Santa is supposed to be a world traveler anyway, and this gave me the feeling that I really was."

For Santa Larry in Dallas, Texas, who has been performing as Santa for twenty-one years, the most important thing is remaining flexible to the circumstances. "I'm a retired Army captain, so I can adapt to and overcome anything," he said.

Four years ago, Larry became the first Black Santa hired by the Mall of America. When his in-person sessions behind plexiglass were shut down after two weeks this year, Santa Larry kept an open mind. "That was just okay, what's next? What are we doing to do, how are we doing it? I'm still coming to your house on Christmas Eve," he said, though — kids, don't read this — he's only metaphorically coming to your house.

"You have to deliver the Christmas spirit. There's no other option. I've got to bring the magic." Though the virtual visits are different, he said, he's still in the presence of children, and that's what brings him joy.

It's not all jingle bells and cheer

In an independent survey of 361 Santas organized by Santa Tim, 13% of respondents said they wouldn't be working at all this year because of their age and health. And when Santa Claus and Mrs. Claus tested positive for COVID-19 after taking photos with upwards of 50 kids in Georgia, it was a reminder of the legitimate risks for all the members of Santa's entourage.

Santa Cliff in particular had to be extra careful. "Early in the season, my wife got ill and I've been a caregiver for her at the same time [as performing as Santa], and I have to be careful when I go out. That has put an emotional toll on me," Santa Cliff said.

A faith-based Santa, Cliff said he's able to get through this difficult time by thinking about what exactly God might be teaching him. "He really wants us to focus on the people that we love and the people in our homes and not worry so much about gifts under the tree," he said.

He also unloads his fears and feelings into a journal. "When I get discouraged, I sit down and start writing stories. It encourages me. It keeps me upbeat and positive." Emotionally, he said, this whole time period and its lack of predictability can be tough for anyone, the jolliest man in the storybook canon included. But for the sake of the kids, the show must go on.

Santa Tim hopes that the virtual drop-ins continue into the future. During the holidays, he visits kids in hospitals every year who, because of their illness, can't have any outside people in the room with them. Santa used to talk through glass to these kids, but can now speak to them directly and for much longer. It's much more special, he said.

In the end, my photo with Santa wasn't necessarily wallet-worthy, but not for want of trying. In fact, it was a reflection of the magical marvel of perspective. In the background, the regulated six feet behind me, Santa is giving two enormous thumbs up, as if I had paid him to photobomb my professional author photo. We're far apart, but Santa's magic is still there.

"I tell kids that Santa has been through pandemics and wars before and he always shows up," Santa Cliff said. "They don't have to worry that Santa is coming."

Dayna Evans is a writer from Philadelphia. You can read the rest of her work here.