The 43-year-old actress opened up about her romance with the 75-year-old star in the June issue of Modern Luxury.

“If someone wants to spend any time thinking I’m strange for loving the most spectacular person on the planet, then that’s their problem,” she told the magazine. “I’m doing just fine.”

For Paulson, age is just a number.

“Every once in a while, I’ll go, ‘Wow. That’s seven years shy of 50. That’s the big five- oh,” she said, referencing her age. “But then I go, ‘Stop running seven years down the road. You have no idea what your life will look like and where you’ll be.’ And that’s just what makes life so sweet. You cross your fingers, take a deep breath and jump. And that’s really all you can do.” 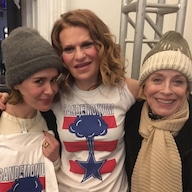 Rumors of Paulson and Holland’s romance first started spreading in November 2015 after the Ocean’s 8 star told the WNYC podcast Death, Sex & Money that she was in a committed relationship.

“It’s the most wonderful extraordinary thing that could have ever possibly happened in my life,” she said, refusing to name names.

It wasn’t until March 2016 that she confirmed she and Taylor were in love.

“If my life choices had to be predicated based on what was expected of me from a community on either side, that’s going to make me feel really straitjacketed, and I don’t want to feel that,” she told The New York Times. “What I can say absolutely is that I am in love, and that person happens to be Holland Taylor.”

According to The New York Times, the two celebrities met at a dinner party about a decade ago. At the time Paulson was dating actress Cherry Jones, who was 18 years her senior. However, the American Crime Story actress told the newspaper she still thought that Taylor was “probably the most exquisitely beautiful woman I’d ever seen.”

The two reconnected a few years later while recording videos for a reproductive rights organization called A Is For. Per the newspaper, the two started to follow each other on Twitter and direct message each other. They then went out on a dinner date and the rest, as they say, is history.

However, not everyone shared Paulson’s confidence about their relationship.

“Early on, when people found out I was with Holland, some said: ‘I think you have to be careful, I’m afraid it’s going to affect your career negatively,” she told The Edit. “I was like, ‘what?’ It never occurred to me at all.”

Still, this didn’t stop Paulson from giving Taylor an “I love you” shout-out at the 2016 Emmys.

Despite the public’s fascination with their romance, Paulson doesn’t let her relationships define her.

“I do not want to be defined by who I share my bed, my home, my soul with,” she told Town and Country. “My choices in life have been unconventional, and that’s my business.”