My mother messages from Italy with a tiny but telling anecdote that sums up the difficulty of the situation.

The assistant manager of her local Carrefour Express in Turin (like Tesco Express, only with nicer wine), is being driven to distraction by little old ladies roaming endlessly around his supermarket.

He keeps telling them to go home and stay home because it’s not safe, and that he’s more than happy to deliver their groceries to them — but still they come. 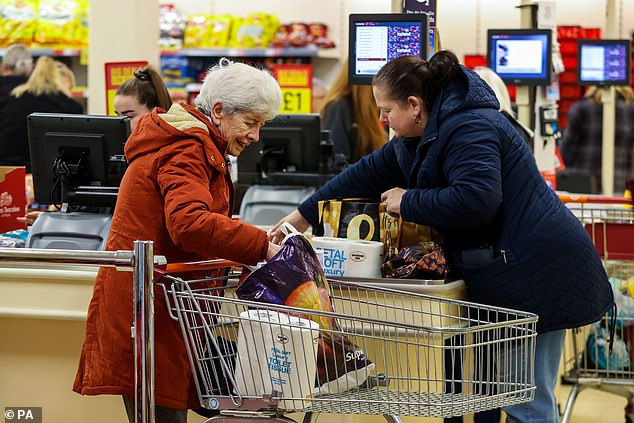 It seems that, for some at least, the ordeal of total isolation is far more gruesome than the prospect of catching the virus itself, writes Sarah Vine (file photo)

It’s the same story at the chemist. With all the bars, shops and restaurants closed, elderly people who live on their own have nowhere else to go for human contact. And it seems that, for some at least, the ordeal of total isolation is far more gruesome than the prospect of catching the virus itself.

Governments are right to talk about this pandemic in terms of a war: the risk to life is very real. But unlike traditional wartime where people, however terrified, however exhausted or confused or demoralised, can come together to support each other, the nature of this current threat demands we do precisely the opposite.

The terror of an invisible foe that lurks within each of us is the stuff of sci-fi horror.

And yet that is what we are facing. An enemy that does not show itself but which hides in the fabric of everyday life. That can only be defeated if we do the exact opposite of what our instincts tell us to do, namely distance ourselves from our nearest and dearest, from the vulnerable, the weak and the old.

You can’t hold your loved ones close because the contact might kill you. A cold, Darwinian force that takes our greatest gift to each other as human beings — love — and twists it into a lethal weapon.

It is that, I think, that goes to the heart of this crisis. And it’s also what makes it so difficult for politicians to calibrate their response. On the one hand, the disease modelling is telling them to limit human contact, to shut down interactions, to all but call a halt to life as we know it. On the other, they know that what they’re asking people to do is, quite simply, inhuman.

In Britain, we are in the relatively early stages of this contagion. There is still a lot of defiance at the notion of self-isolating, especially among our feisty and independent older population.

Indeed, the Prime Minister’s own father, Stanley Johnson, said yesterday that he would still go to the pub ‘if he needed to’. And while I fully respect a man who considers a trip to the pub a necessity, it nevertheless shows the challenge the Government faces.

That is why I think, on balance, they have little choice but to allow shops and businesses to continue trading, and to keep children going to school.

It’s not just a question of maintaining morale, keeping up a semblance of normality; it’s also a case of supporting business and jobs for as long as we possibly can.

And all of us must also give serious consideration to behaviour — that drink in the pub after work with friends, that Mother’s Day lunch, that glass of wine with a girlfriend — that previously wouldn’t have merited a second thought.

Let us pray that one day soon we can go back to taking our lives — and our loved ones — once again for granted.

Seeing the chilling images of American citizens queuing round the block to buy guns, I’ve never been more happy to live in a country where people do not have the right to bear arms. We may be fighting over loo roll, but at least we’re not shooting each other. Yet.

At least we’ll see a lot less of Kim

I guess every cloud has its silver lining.

The ridiculous Met Gala, aka ‘Fashion’s Biggest Night Out’, which was scheduled for next month, has been postponed. I for one won’t miss the sight of Kim Kardashian picking her way up the stairs of New York’s Metropolitan Museum of Art in yet another see-through thong. Especially since this year we would have had to suffer the addition of the newly liberated Meghan Markle, presumably with Prince Harry in tow.

How ridiculous those two seem now in the light of what all of us are facing. 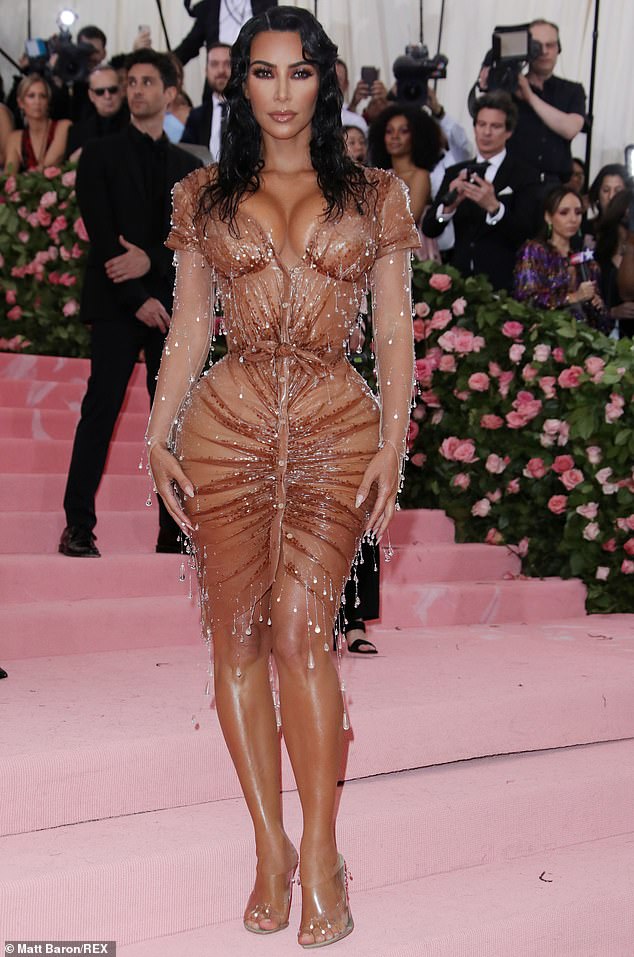 Kim Kardashian wearing Thierry Mugler at the Met Gala celebrating the opening of Camp: Notes on Fashion at the Metropolitan Museum of Art, New York, in May 2019

Whatever else happens over the coming weeks and months, the fact is all of us are going to have to get a lot better at entertaining ourselves within the confines of our own four walls.

Personally, I love a clear-out, mainly because it allows me to exercise some element of control over my life, in a kind of ‘the sky may be falling but at least all my pants are neatly folded’ sort of way.

Others have more lofty aspirations. A friend tells me she’s going to re-read the whole of Hilary Mantel’s Tudor trilogy. A dose of the plague, or more than 1,000 pages of Cromwellian gloom? It’s a close call.

Although, in her case, I cannot help wondering: is it really Covid-19 that’s keeping her away from the studio, or has the prospect of another morning being shouted over by her co-presenter Piers Morgan simply proved too much even for the saintly Susanna? I’m a huge fan of Piers (as are we all in the Vine household), but even I can’t help thinking he’s lost the plot in recent days in his social media outbursts about how ministers are handling the crisis.

Of course, he’s right to challenge the Government. But there’s a fine line between robust questioning and just shouting so loudly that everyone is forced to put their fingers in their ears.

I adore Esther Rantzen anyway, but her suggestion that the over-70s occupy their time in quarantine by writing their own memoirs is pure genius.

I know its anathema for that generation to indulge in too much navel-gazing, but the idea that we could emerge from this in three months’ time with a collective compendium of the shenanigans of the baby boomer generation is tantalising. It would be a huge bestseller.

Is it not a tiny bit rich of Richard Branson to be asking for a Government bailout when he’s so wealthy that he owns an entire island in the Caribbean — and is resident offshore?

I’d rather see taxpayers’ money spent on a) someone who actually contributes to the Exchequer, and b) helping small businesses and workers on zero-hours contracts, all of whom are facing financial Armageddon.

We are not a number

My brother Ben, who is under house arrest in Madrid with his young son, took this photograph from the window of his apartment.

Quite aside from the crumbling beauty of the setting, there is something so touching about it; a reminder that, amid all the statistics and scientific analysis around Covid-19, at the end of the day it’s about human beings — and what all of us, as individuals and families, are going through. 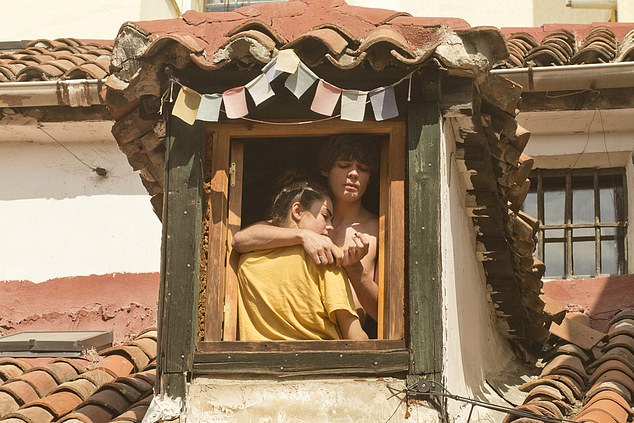 My brother Ben, who is under house arrest in Madrid with his young son, took this photograph from the window of his apartment. Quite aside from the crumbling beauty of the setting, there is something so touching about it

Every war has its winners and losers — and it’s not hard to see that companies such as Amazon, Facebook, YouTube, Instagram, Microsoft, Apple and the like are going to do very well out of this crisis, as users trapped in their homes flock to their platforms to while away the boredom and communicate with loved ones.

Already figures for February show a 15 per cent jump in Netflix subscriptions, and in‑game purchases for Xbox are soaring. These tech companies have grown mighty, thanks to globalisation, and now that same globalisation has been a factor in the rapid spread of this pandemic, they stand to profit even more.

And yet, in many cases, they remain shamefully reluctant to pay their fair share, adopting complex loopholes to avoid paying tax.

Jeff Bezos, Amazon’s founder, is the world’s richest man. Surely, it’s time he and his band of fellow tech cowboys did the right thing by governments struggling to shield their economies — and their people — from the devastating financial knock-on of Covid-19.

Or will they, as they too often seem to, just sit back in their luxury mansions in Palo Alto and watch the money roll in?