Few people would emerge from a courthouse jubilant that they had ‘only’ been handed a three-month driving ban and a £1,500 fine.

But by the standards of Katie Price’s car-crash existence, this latest humiliation is indeed a triumph. She said it herself: ‘I thought I was about to get two years.’ A sentiment echoed by many, I suspect, who are revolted at the leniency of her sentence.

For those readers who have avoided the travails of this ex- glamour model, Price was found — knickerless, naturally — in a state of considerable intoxication on the back seat of her Barbie-pink Range Rover last October.

Her boyfriend was in the passenger seat. The driver, she claimed, was a friend of his who had ‘run off’ after an argument. 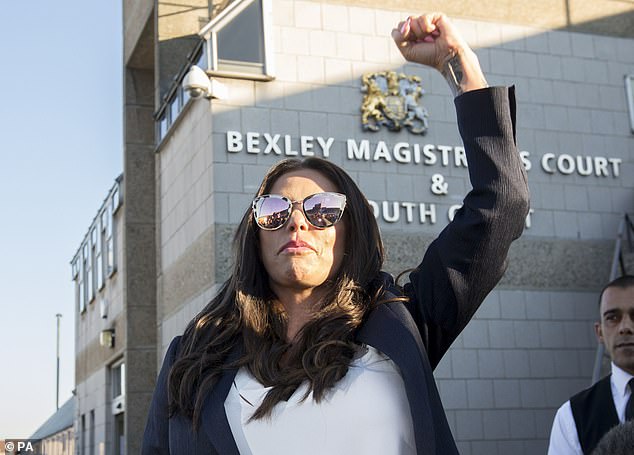 Katie Price was slapped with a three-month driving ban and a £1,500 fine at Bexley Magistrates Court

Despite there being no clear evidence to suggest the presence of this person, and both Price and her boyfriend being reluctant to furnish the police with a name, she was insistent it was not her behind the wheel when the car executed a wonky three-point turn, riding up on the verge and hitting a VW Golf.

As to the fact there were bits of shrubbery and vomit on the outside of the car, that was apparently also nothing to do with her. Nothing whatsoever, occifer, honest.

Even more extraordinary is that she already had a ban — for driving while disqualified and without insurance. Not that she minds. In fact, it seems to have worked to her advantage.

‘I chose to be disqualified for three months because it adds on to my disqualification that I’m already on, which means I get my driving licence back on the 24th of May which means I can go car shopping,’ she says.

The sheer shamelessness of the woman is astonishing. But then what else do you expect?

This is someone who has made a career out of being brazen. She is a poster girl for all that is wrong with our celebrity-obsessed society. She’s proof that, if you have enough front — and Price certainly has a good deal of that — you can get away with almost anything. 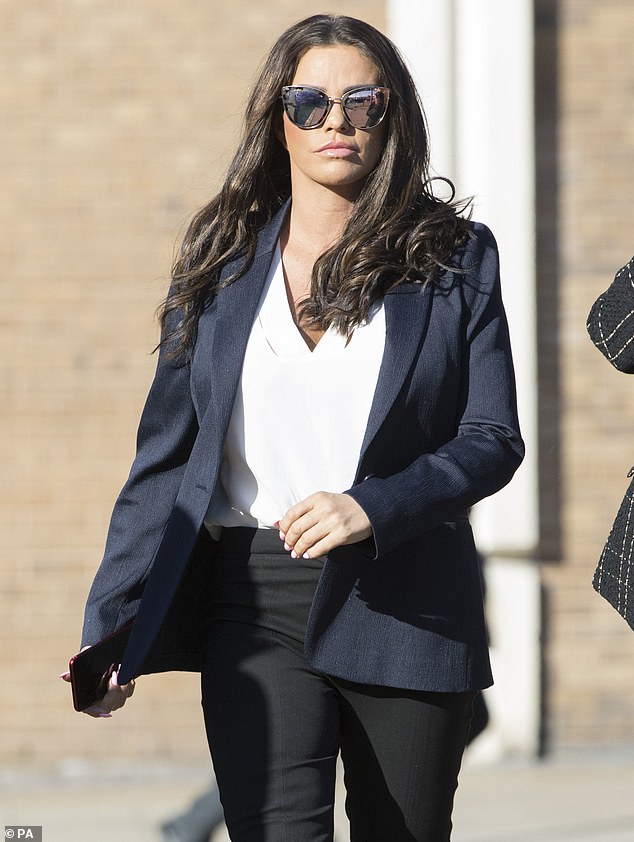 She said: ‘I chose to be disqualified for three months because it adds on to my disqualification that I’m already on’

The tragedy of Price is that she could have made so much more of her life. She may have looked like just another brainless bimbo, but beneath all that Botox was a sharp business brain. She built up a £45 million empire based around ghostwritten autobiographies and novels, her many reality shows and lucrative fashion and beauty merchandising lines. Not bad for a girl who left school at 16.

There are people with multiple PhDs who could never hope to make that kind of money.

But that’s the heart of the problem. Success such as Price’s is built on sand, a mirage predicated on an ever-decreasing spiral of self-debasement as she is forced to give more and more of herself away in pursuit of ever less.

Not quite A Harlot’s Progress, perhaps; but if William Hogarth were alive today . . .

On one level I can’t help feeling a little sorry for her. At 40, the looks that made her famous are fading fast, not helped by her penchant for drink and drugs.

She has three failed marriages under her belt — and two of her five children are living with their father, Peter Andre.

All the money she made seems to have been lost or squandered. Last year, she narrowly avoided being made bankrupt — and her capacity to pull herself out of the mire is dwindling as her behaviour continues to spin out of control as fast as her car.

Perhaps that’s why she seems so jubilant: once again the world’s gaze is upon her, even if it is tinged with horror and opprobrium.

No doubt she will find some tawdry way of capitalising on this latest escapade. But however she justifies her actions — blaming it on the stress of her sick mother, or the challenges of bringing up her disabled son — the truth is that unless she gets to grips with her life and faces up to her failings there is only one end to this tale.

And it’s not a happy one.

Scientists have discovered that moggies really are copycats — and develop personalities that mirror their owners.

So how come my cat, Cersei, is so unbearably bossy and demanding?

The story of the homeless man who had a bucket of dirty water thrown over him by a railway worker is a cautionary tale for our times.

At first, there was outrage at the inhumane treatment meted out to him. How could anyone be so callous! Now it transpires there is a back story: the man was a convicted killer. I’m still not sure that excuses tipping the bucket.

Still, it reminds me of the case of the Somali man who sparked a near riot on a Turkish Airlines plane at Heathrow last year.

Concerned that he was being deported unfairly, passengers forced security guards to remove him from the aircraft. But, like our homeless man, it turned out that things weren’t quite so morally simple.

The Somali man they were defending had been sentenced to nine years in jail for his part in a vicious gang rape of a teenage girl.

That’s the trouble with social media justice: it only sees what it wants to see. And that’s rarely the full picture.

Marks & Spencer is no doubt banking on its latest fashion ambassador TV host Holly Willoughby’s irrepressible popularity perking up its clothing sales; but if her showcase ensemble — white cowboy boots, micro-mini, unflattering frilled denim shirt — is anything to go by, the High Street chain has once again missed the mark. I mean, there’s inspiration — and then there’s desperation.

As part of new changes to the (now compulsory) sex education curriculum, the Government has pledged to teach pupils about the abhorrent practice of female genital mutilation.

But why? FGM is a form of torture and child abuse that only affects a very small number of pupils from specific — and clearly identifiable — backgrounds.

Truth is, the only people who need educating about FGM are the individuals and communities that continue to practise it. Anything else is just politically correct nonsense.

Call me a cynic, but I’d say that Jihadi bride Shamima Begum’s insistence that she wants to return to Britain so she can ‘inspire British girls not to make the same mistakes’ smacks less of genuine regret and more of the fact that clearly someone has finally given her a bit of savvy media coaching.

I’m afraid it will take more than fine words to convince the nation that she is genuinely repentant and thus deserving of our sympathy.

I’m so old I was there when Steve Coogan’s brilliant comic creation Alan Partridge burst onto our screens in the early Nineties.

Now he’s back as the co-host of a show called This Time. But if the first episode is anything to go by, it won’t catch on.

Not because it’s no good, more because — as anyone who has had the misfortune to watch The One Show or any other ‘magazine’ programmes on which This Time is based — the real thing is so much more cringe-making than the parody.

I couldn’t help smiling when I read that the £7,000 earrings worn by the Duchess of Sussex in Morocco (right) were from the ‘Snowflake’ range at Birks. The perfect accessory for every virtue-signalling Royal-about-town, then.

The more ‘woke’ something is, the more it tends to send me off to sleep.

But not so the appearance of American actor Billy Porter on the red carpet at Sunday night’s Oscars.

In what was no doubt intended to be some very complex and meaningful statement of gender neutrality/equality, Porter wore an extraordinary ‘tuxedo gown’.

Everyone, of course, said he looked fabulous. I thought he looked a tiny bit silly — but judge for yourselves. 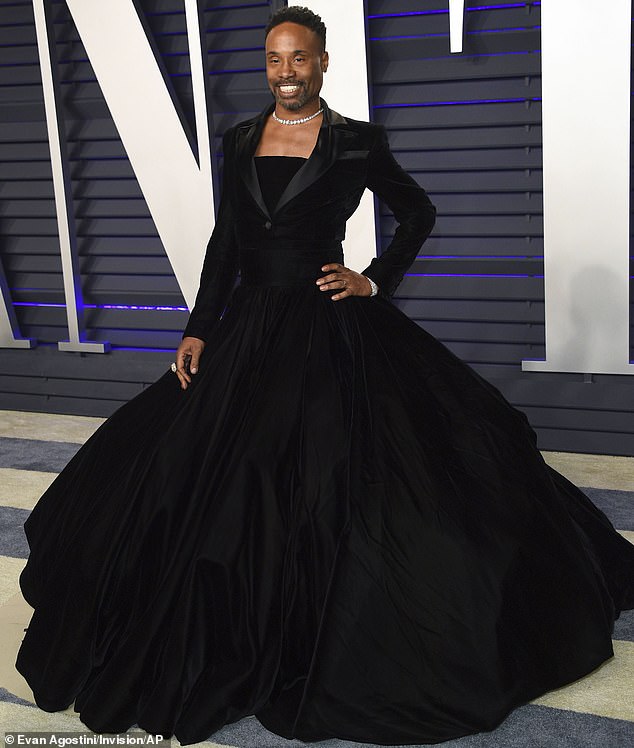