A morbidly obese school dinner lady who used to cut the labels out of her size 24 clothes in shame and hide from mirrors has dropped nine stone after starting to batch cook low-calorie recipes and walk her six-year-old daughter to school.

Mother-of-three Rachel Cuttriss, 40, from Chesterfield, Derbyshire, ballooned to 21 stone, after the breakdown of her 13-year marriage left her feeling ‘depressed, alone’ and ‘as though she had nothing to live for’.

But friends rallied around after becoming concerned about her relationship with food, and convinced 5ft 10in Rachel to join a slimming group. 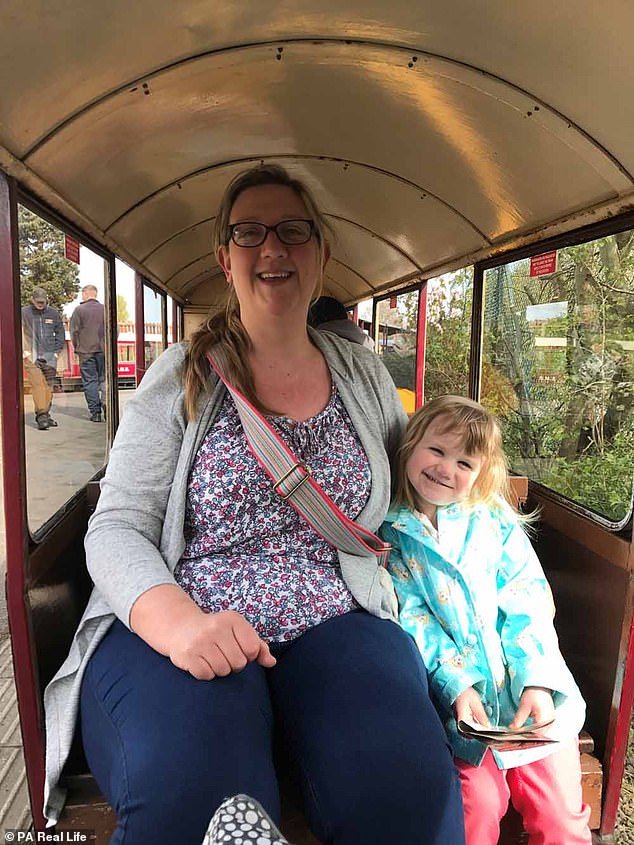 The mother-of-three from Chesterfield, Derbyshire, dropped her weight to an impressive 13 stone after she began cooking enough chicken and coconut curry for an entire month

Following advice from a slimming group, Rachel also began walking her six-year-old daughter to school every day and swimming three or four days a week to drop the pounds 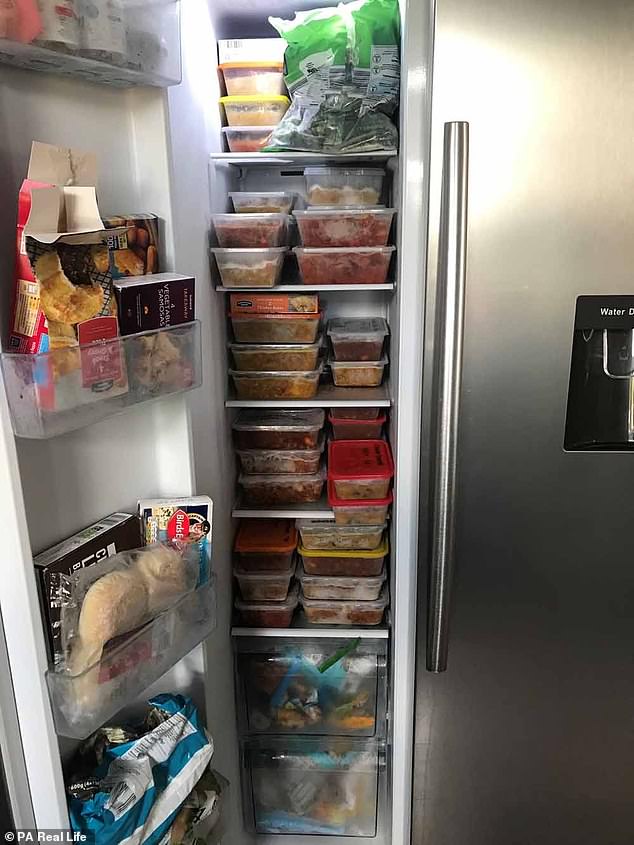 Whereas Rachel used to come home too tired to cook and had to order a takeaway, she now batch-cooks enough chicken and coconut curry for a month

‘I wasn’t just a comfort eater, I turned to food whatever the emotion,’ said Rachel, who also works as a school cleaner, describing her war against food.

‘If I was happy, I’d celebrate with takeaways and treats, if I was stressed, I’d turn to chocolate and if I was sad I’d turn to ice cream.’

After the collapse of her marriage in September 2016, which she said was one of the hardest periods of her life, Rachel put on a further two stone as she gorged away her heartbreak and cared for Lucas, 15, Elliot, 13, and Abigail, six.

‘My marriage had broken down, I was working two jobs and, despite being a mum to three beautiful children, I just didn’t have a life,’ she said.

‘I would come home exhausted, too tired to cook something up, and would call up the local takeaway or pop to the chippy.

‘I was scared I would never find someone new, and working and looking after kids all became too much.’

She relied on buttered white toast for breakfast, followed by leftover school dinners of lasagne and fruit crumble for lunch, and then a large fish and chips with large mushy peas for dinner. 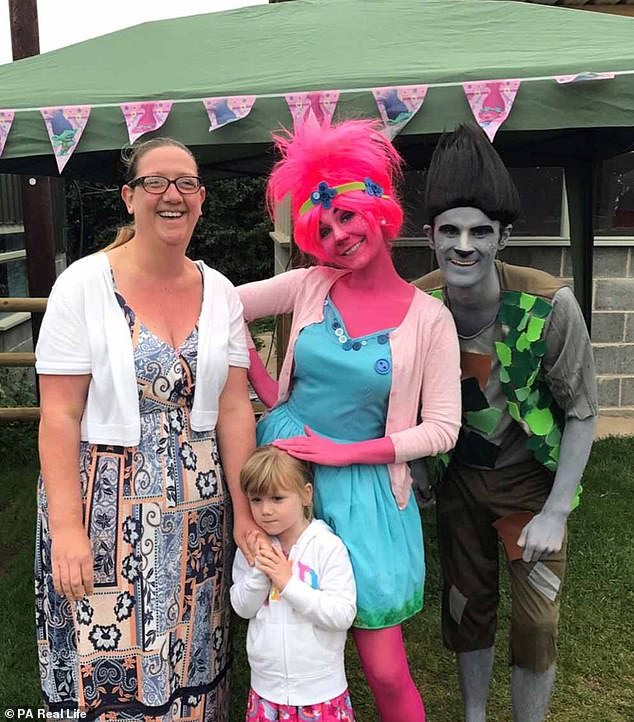 The single mother’s weight ballooned after the breakdown of her 13-year marriage in September 2016, as she gained two stone 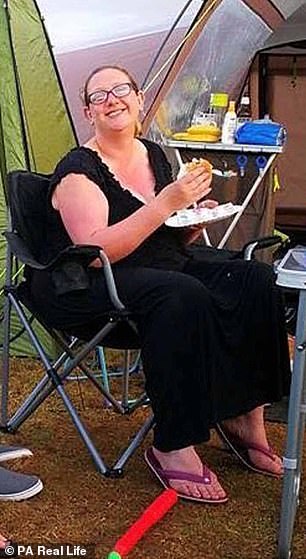 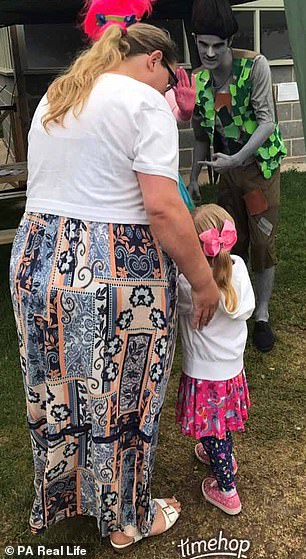 However, beforehand she also battled with food. Rachel said that if she was happy she would get a takeaway, if she was sad she would eat ice cream, and if she was stressed she would turn to chocolate

Rachel had tried to get her waistline under control before using crash diets, that she now believes ruined her metabolism and left her with an insatiable appetite.

‘It still shocks me just how much I used to be able to eat,’ she said.

‘I honestly blame that on some of the fad diets I have been on before my marriage ended.’

‘I would stick to diets, eating as much pasta and potato as I could to satisfy my appetite, but there was no set limit – I just didn’t know where to stop.

‘As soon as I lost weight, I’d kick the diet in, and found myself still wanting to eat just as much and the weight piled back on.

‘Being able to eat as much as you want of certain food groups and snacks is never a good idea – especially for someone like me.’

Rachel, who also works as a school cleaner, joined slimming group WW after friends became concerned about her weight 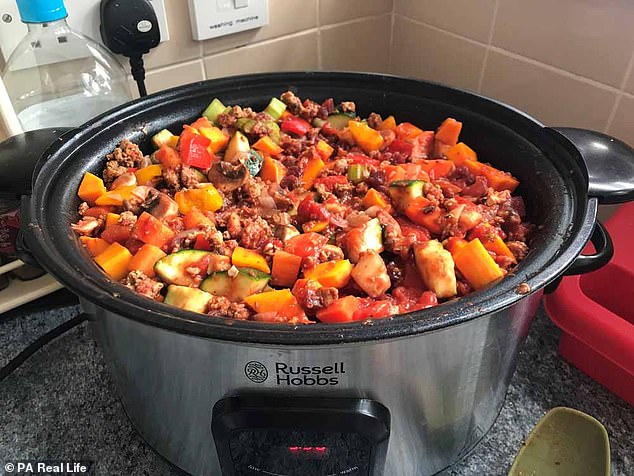 Rachel says that their points-based low-calorie meal plans, combined with batch cooking enough to last a month, was the secret to her success

However, after friends intervened in April 2018, she joined slimming group WW and ‘turned my life around’.

Rachel is convinced that the secret to her weight loss success was their point-based meal plans, combined with batch cooking enough of her favourite recipes to last an entire month.

‘I open my freezer and everything I could possibly want is there. It’s essentially a ready meal with none of the bad stuff,’ she said.

DINNER: A couple of cod with a large fish and chips and large mushy peas

LUNCH: Jacket potato with a portion of salad

DINNER: Chicken and coconut curry that was batch cooked to last a month

Rachel began kick starting her day with boiled eggs and Babybel cheese, before having a jacket potato with salad for lunch and then a homemade, batch cooked frozen chicken and coconut curry for dinner.

‘I’m a completely different woman,’ she said. ‘I used to cut the labels out of my size 24 clothes from shame – now I let my size 12s hang out with pride!’

With the help of ‘incredible’ WW coach Margaret Tennyson, Rachel also began walking her youngest to school and swimming to get her weight down to an impressive 13 stone.

‘I’m doing things I’ve not been able to do in years and it’s benefited the whole family,’ she said. 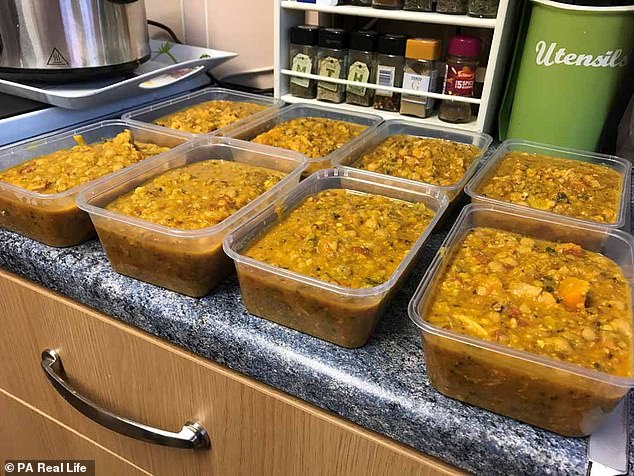 However, she also credits their ‘incredible’ coach for helping to kick start her exercise regime. She now walks her daughter to school and swims three or four times a week 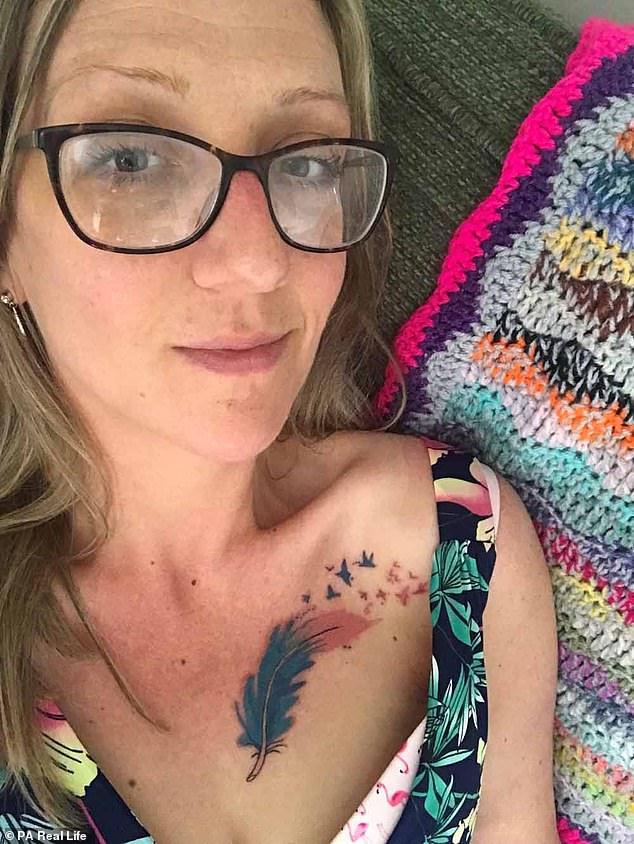 Since her dramatic weight loss, Rachel said that everyone is asking her whether she will get back on the dating scene. But, she says, ‘for the first time in a long time I feel I have a healthy relationship with myself’

‘I walk my youngest to school every day – something that used to leave me out of breath and in agony – and I’ve even started swimming 75 lengths three or four days a week at the local pool.

‘I don’t know what is more shocking – that or me slipping into a swimming costume every week!’

After her impressive journey, friends have also started asking Rachel when she will get back on the dating scene.

‘Everyone keeps asking when I’m going to get back on the dating scene, and part of me thinks that will happen,’ she said.

‘But for the first time in a long time I feel I have a healthy relationship with myself – with or without Mr Right!’

If you feel inspired by Rachel’s story and would like to start your own weight loss and wellness journey with WW, sign up at WW.com.