Scots hack a water cooler and replace it with Irn Bru

Social media users were left in hysterics after a photograph of an ‘Irn-Bru’ water cooler went viral.

Reddit user MeetNight, from Scotland, delighted fellow users when they shared the snap of the hacked-water cooler online, writing: ‘Spotted in Edinburgh.’

The photograph shows a cooler with a 1l bottle of the orange drink in the place of the normal water barrel. 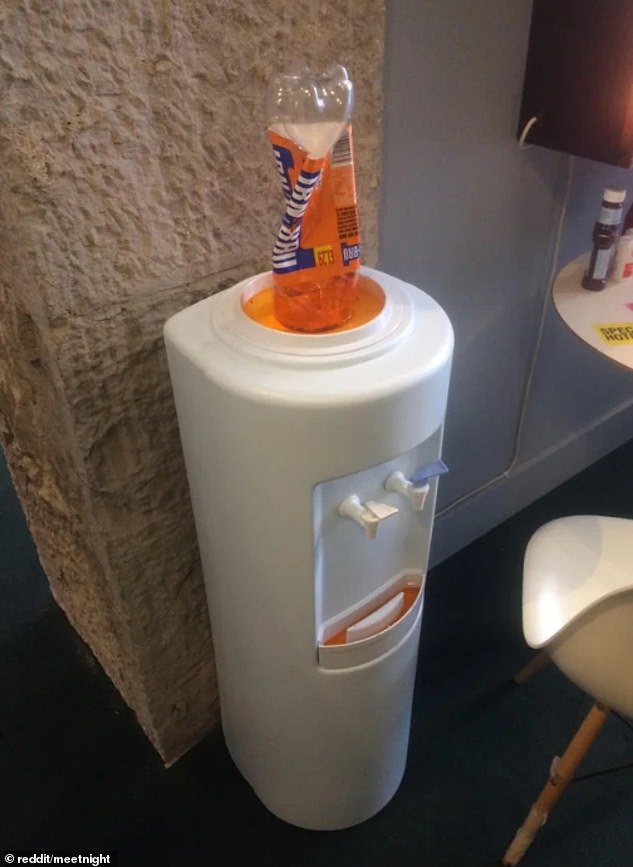 Other social media users were amazed by the hack, with one commenting: ‘Looks like my office is about to get an upgrade’

Others were amazed by the hack, with many commenting on the ingenious move.

One deemed it ‘the fountain of life’ while another excited user wrote: ‘Looks like my office is about to get an upgrade.’

In the now-viral photograph, the Irn-Bru bottle appears to have been twisted to fit into the hole at the top of the water-cooler.

This should allow those seeking a refreshing drink to access the iconic orange through taps at the front of the cooler.

Social media users were delighted by the ingenious hack, with one commenting: ‘I feel like I have just achieved enlightenment’

And while some appears to have spilled out into the top of the cooler, the near-empty bottle and orange liquid in the ‘water tray’ appears evidence that it could actually function.

Other users were delighted by the idea, with one commenting: ‘You mean that actually works!? I feel like I have just achieved enlightenment.’

One jokingly commented: ‘Keep it classy.’

Another added: ‘When I went to Edinburgh a few years ago, I was in the info shop outside the train station getting some cash and one of the drink lockers inside only stocked water and Irn-Bru. Stay classy Scotland.’

But another user was quick to defend the drink, writing: ‘Irn-Bru is hella classy. It’s the best drink known to man.’

But some social media users couldn’t help but point out how ‘sticky’ the water cooler looked, with one calling it a ‘mess’

Meanwhile some users were perplexed over how the water cooler might work, with a few commenting on how ‘sticky’ the fountain appeared to be.

While another wrote: ‘I understand a sticky mess.’