Cashing in on the Meghan effect? Serena Williams sports a $90 ‘Royal Duchess’ hoodie from her clothing line – and reveals she’s sent one to Kensington Palace

Serena Williams has unveiled a $90 (£70) ‘Royal Duchess hoodie’ that appears to have been inspired by close friend Meghan Markle – revealing that she has sent one to Kensington Palace.

The tennis player, 36, wore the sweatshirt during an interview with the Today show on Wednesday, as well as in an Instagram clip of her with singer Nicki Minaj.

Posting on Instagram, Serena wrote: ‘Queen + Queen = Royal. Me and @nickiminaj having fun with boomerang. Wearing the royal hoodie by @Serena. Link in bio!!’

The Royal Duchess Cropped Hoodie is available in both black and blue, as part of Serena’s clothing line. 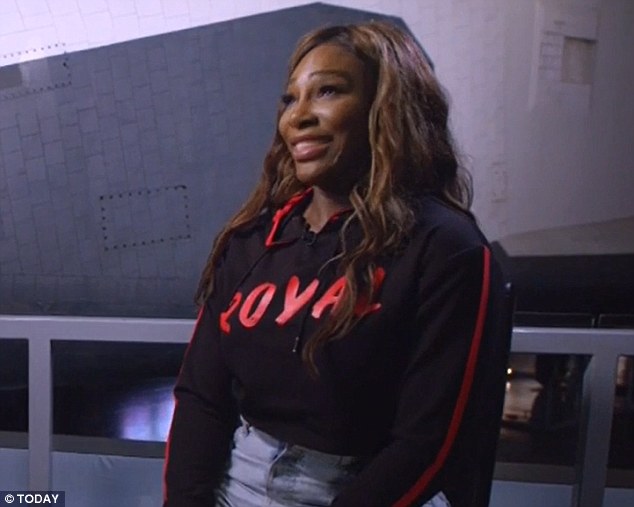 Serena Williams has unveiled a new $90 ‘Royal Duchess hoodie’ from her clothing line (above, the tennis star wearing it on Today), which appears to have been inspired by her close friend Meghan Markle 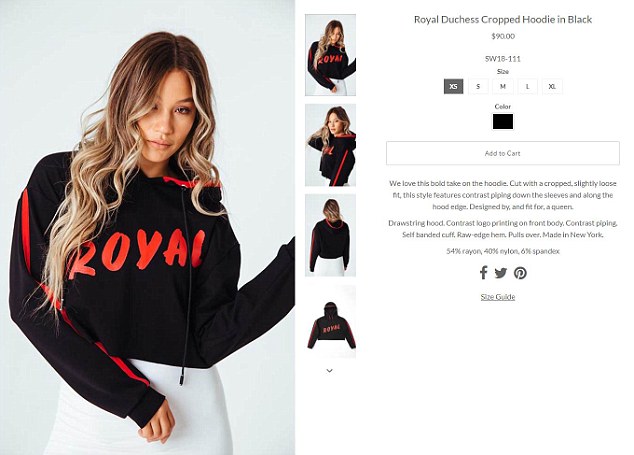 The Royal Duchess Cropped Hoodie (above), which features the word Royal emblazoned on it in red, is on sale as part of Serena’s clothing line

On the website, the hoodie is described as a ‘bold take on the hoodie’ and ‘designed by, and fit for, a queen.’

According to Today, Serena has even sent friend Meghan one of her Royal hoodies to wear.

Serena enjoys a close friendship with the Duchess of Sussex, 37, attending the royal wedding in May with her Reddit co-founder husband Alexis Ohanian.

The pair are believed to have met at the 2010 Super Bowl in Miami, quickly hitting it off. 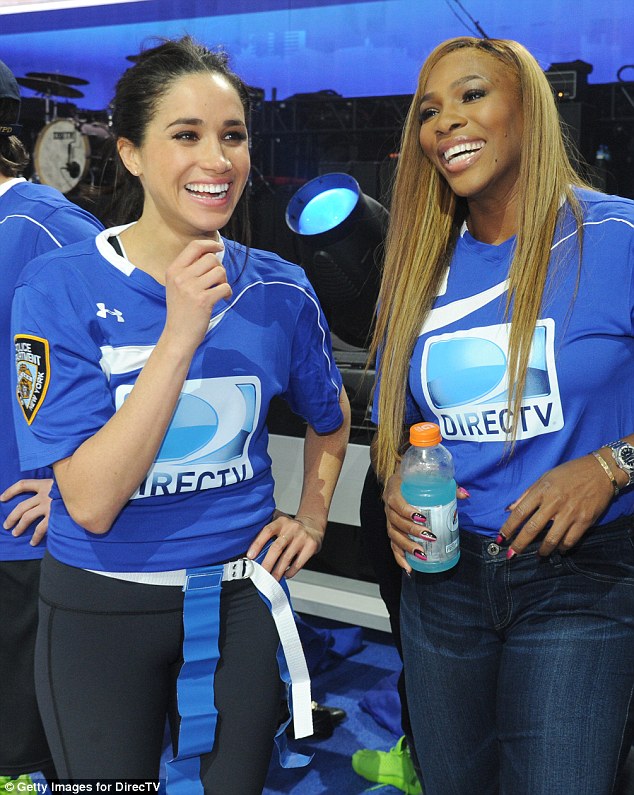 Serena enjoys a close friendship with Meghan (pictured together at a Beach Bowl event in New York in 2014), and attended the royal wedding in May 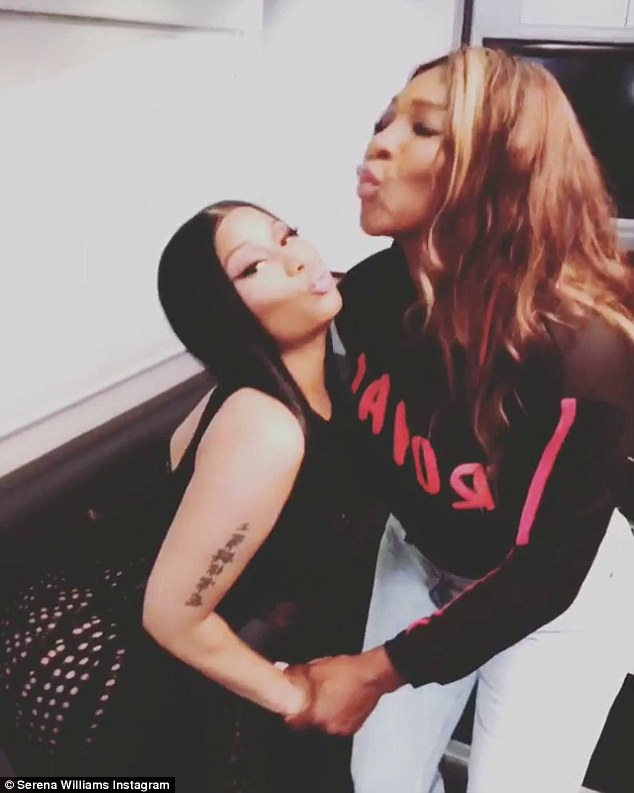 The tennis star modeled her new Royal sweatshirt as she posed in an Instagram clip with Nicki Minaj (above), which Serena captioned: ‘Queen + Queen = Royal. Me and @nickiminaj having fun with boomerang. Wearing the royal hoodie by @Serena. Link in bio!!’ 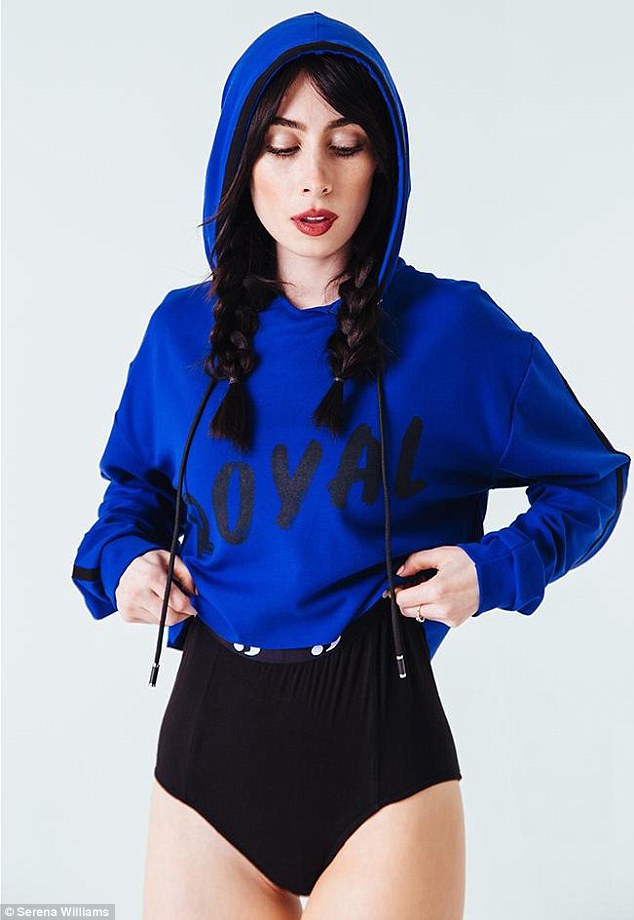 Serena’s new Royal Duchess Cropped Hoodie, priced at $90, is also available in blue (above). The tennis player revealed she has sent Meghan one of the hoodies

OTHER BRANDS CASHING IN ON THEIR MEGHAN LINK

The Canadian-based label re-named their coat The Meghan after the former actress wore their white wrap coat at her engagement photocall.

The Californian-based jewellery brand revealed the Duchess had commissioned six gold bracelets for her friends. The Kensington bracelet is now available to buy for $450 (£340).

The LA-based jeans brand re-issued Meghan’s favourite Looker Ankle Fray Love Gun denim jeans, which cost $228 (£170) following the interest in her style. The jeans have been exclusively restocked at Selfridges.

Another Canadian brand, Mackage, decided to restock a sand-coloured coat worn by the Duchess in Belfast after selling out instantly.

Meghan has been seen supporting Serena at her tennis matches on a number of occasions, most recently at this year’s Wimbledon Final, which she attended with the Duchess of Cambridge.

The release of Serena’s Royal Duchess Cropped Hoodie comes after Meghan and Prince Harry’s matchmaker Misha Nonoo was accused of ‘cashing in’ on her royal connections.

Meghan wore the simple white shirt with ripped jeans when she attended the Invictus Games with Harry in Toronto last September – just two months before their engagement was announced.

But Misha’s label is far from the first to seize on the marketing potential of a link to the royal romance.

Jessica Alba promoted her natural products business The Honest Company after it was revealed that Daniel Martin, one of her consultants, was doing Meghan’s make-up .

Make-up artist Charlotte Tilbury also capitalised on the royal connection, after sharing the details of the cosmetic products worn by wedding guests Amal Clooney and Lady Kitty Spencer on the big day. 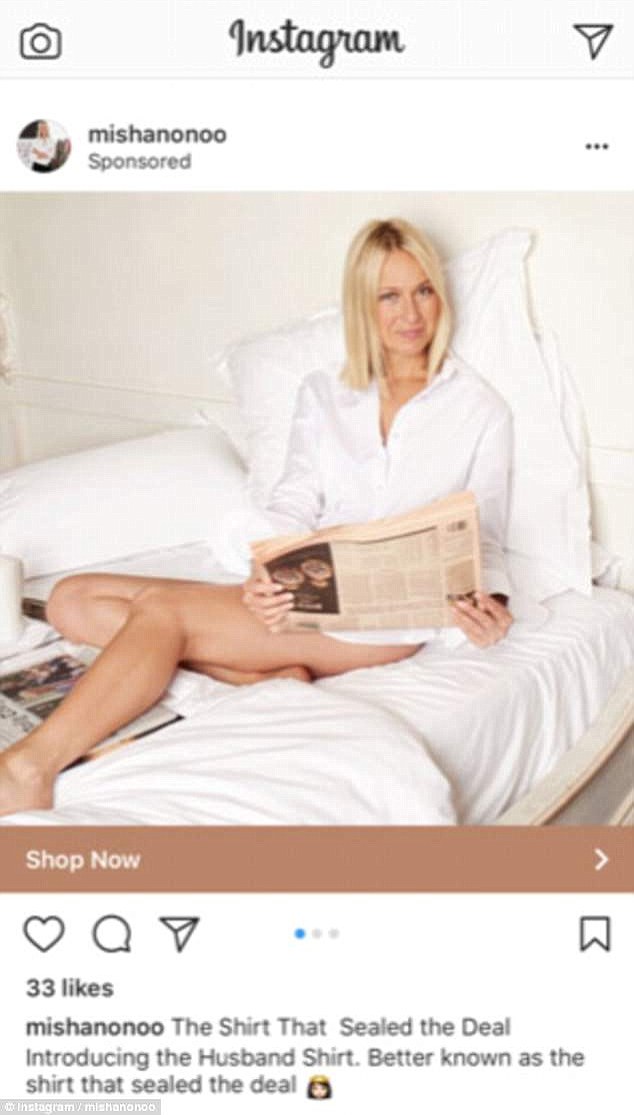 It comes after designer Misha Nonoo was accused of ‘cashing in’ on her royal connections, after a sponsored post (above) from her Instagram account described the Husband shirt that Meghan wore as ‘the shirt that sealed the deal’