‘One of the most astounding things I’ve seen!’ Sesame Street episode that shows Elmo unraveling over feud with a PET ROCK leaves viewers in stitches – prompting the Muppet to release an official statement about the falling out

Elmo’s longstanding feud with Zoe’s pet rock, Rocco, on Sesame Street has the internet in stitches after a resurfaced video of him flipping out over the inanimate object went viral, prompting him to release a statement.

Rocco has been a thorn in Elmo’s side since he was introduced in Season 30 of the children’s show in 1999. The furry red Muppet has been unable to hide his frustration with Zoe’s insistence on treating the pet rock like a real person.

Twitter user @Wumbooty drew attention to the ongoing rivalry on Monday while sharing footage of the Sesame Street character losing his cool in a 2004 episode titled ‘Elmo feels he’s treated unfairly by Rocco.’ 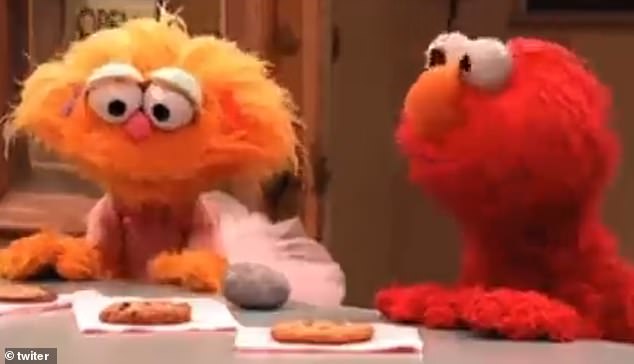 A hilarious clip of Elmo flipping out on Zoe and her pet rock, Rocco, in a 2004 episode of Sesame Street has gone viral after it resurfaced on Twitter 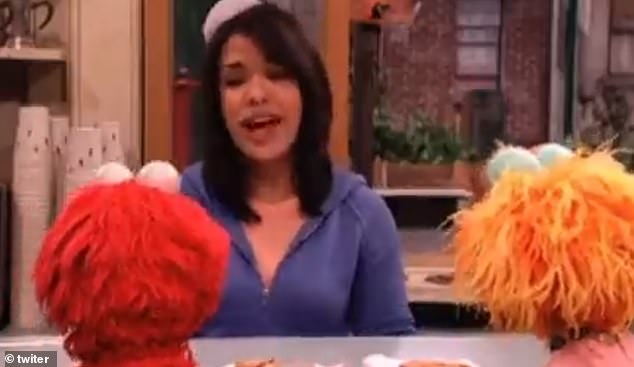 In the short video, Elmo asks Gabi (Desiree Casado) if he can have an oatmeal raisin cooking, saying they are his ‘favorite.’ When Gaby says she gave the last one to Rocco, he tries to trade

‘There are tears in my eyes y’all my stomach hurting,’ the user tweeted.

In the 35-second clip, Elmo asks Gabi (Desiree Casado) if he can have an oatmeal raisin cooking, saying they are his ‘favorite.’ When Gabi explains that she just gave the last one to Rocco, he says he will just trade cookies with the pet rock.

However, Zoe informs him that Rocco wants the oatmeal cookie for himself, which is when Elmo flips out on his pal and her pet rock.

‘Yes, he will!” Zoe responds. ‘You can’t have that cookie, Elmo! Rocco wants to eat it!’

‘How? How is Rocco going to eat that cookie, Zoe? Tell Elmo. Rocco doesn’t even have a mouth,’ he hits back. ‘Rocco is just a rock. Rocco is not alive.’

The video has been viewed more than 7.4 million times on Twitter, where people are going wild over Elmo’s shocking outburst and accusing Zoe of ‘gaslighting’ him.

‘Was Elmo always like this?’ one person asked. ‘Cause I watched this all the time but never clocked how funny this mf is.’

‘The Elmo vs Rocko saga is one of the most astounding things I’ve ever seen,’ someone else commented. ‘The funniest part is that Elmo’s never in the wrong, but he keeps getting scolded for not playing along. And Zoe gaslights the crap out of him in every situation.’ 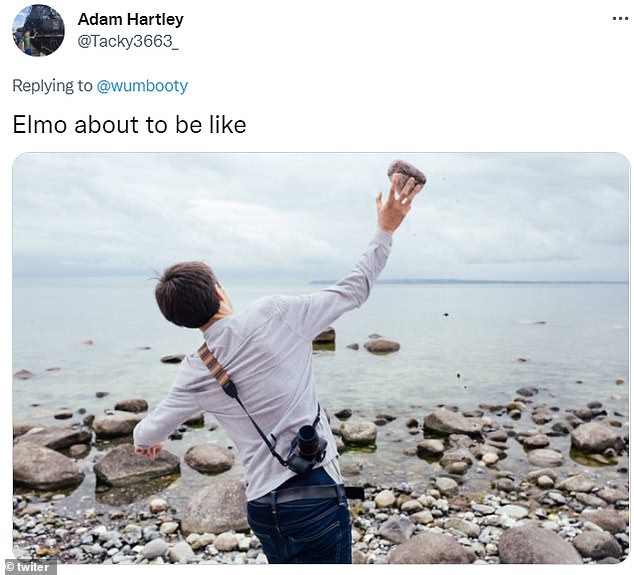 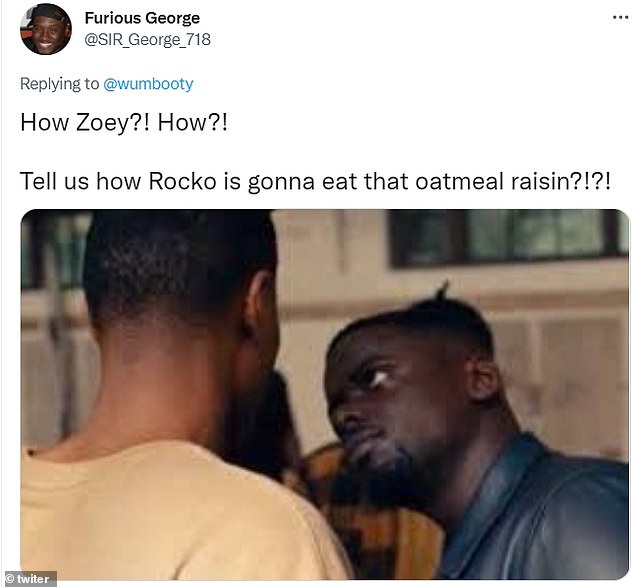 Fans can’t stop laughing over the footage, and many have accused Zoe of ‘gaslighting’ Elmo

Another tweeted: ‘That rock did something to Elmo and imma find out what happened.’

People were also inspired to share other videos of Elmo being irritated with Zoe and Rocco, including a clip of the pals arguing about whether or not rocks can play.

‘Elmo vs Rocko the greatest rivalry of all time,’ @formermerc tweeted along with the Sesame Street footage.

‘On one hand, Elmo is a petty king. On the other, Zoe is a gaslighting legend,’ one Twitter user pointed out. ‘Truly I cannot pick a side here, I revere them both.’

A number of people admitted to being delighted by the absurdity of the rivalry, saying it was exactly what they needed in 2022. 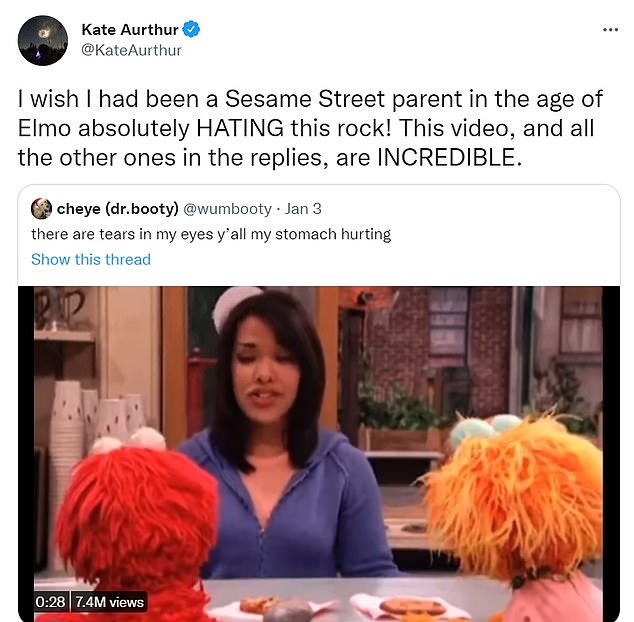 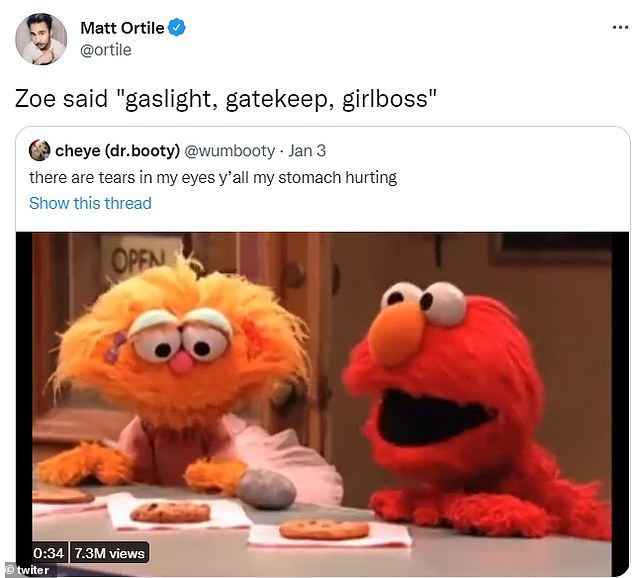 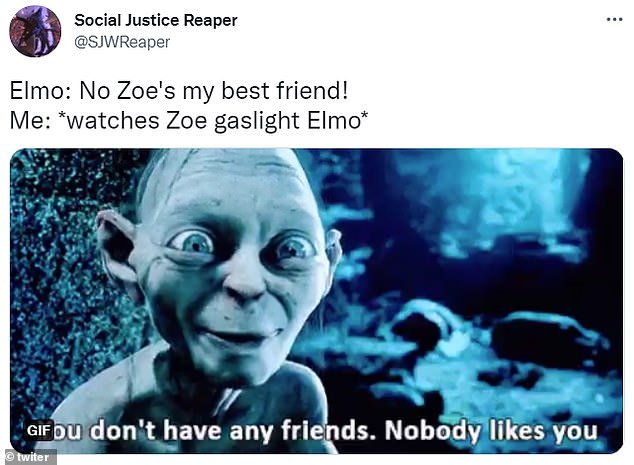 ‘Things like Elmo having a feud with a pet rock are why I joined Twitter in the first place,’ one fan wrote. ‘Not to try and preserve democracy.’

‘I just tried to explain the Elmo v. Rocco feud to my mom. She thought I was crazy for finding it amusing,’ someone else shared. ‘Look, I think we all needed this in year 3 of the pandemic.’

Another added: ‘I wish I had been a Sesame Street parent in the age of Elmo absolutely HATING this rock! This video, and all the other ones in the replies, are INCREDIBLE.’

Elmo responded to the viral video on Twitter Wednesday, and while he insisted he and Zoe are still close, he refused to dish about his relationship with Rocco. 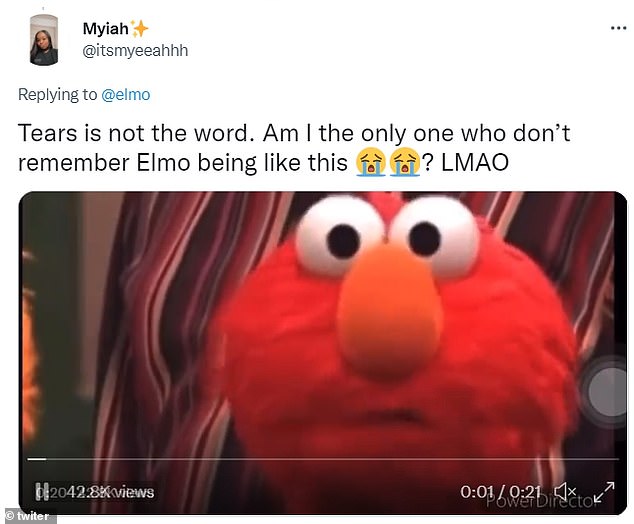 A number of people admitted to being delighted by the absurdity of the rivalry, saying it was exactly what they needed in 2022

He also proved that he was still not over the cookie incident when he returned to Twitter less than an hour later to drive home his point that rocks can’t eat.

‘Has anybody ever seen a rock eat a cookie?’ he asked. ‘Elmo is just curious.’

Fans applauded Elmo for standing up to Zoe, with one person responding: ‘No I have NOT, Elmo! Good on you for not letting Zoe gaslight you this year!’

‘The way @elmo refuses to let Zoey gaslight him is the kind of energy I’m bringing to 2022,’ someone else shared.