Surveys are ongoing on the southern section of the reef, but with reports of local bleaching, scientists cannot rule out widespread bleaching of similar severity. 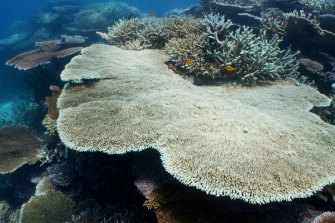 Bleaching occurs when the sea surface temperature is too hot for too long, causing corals to expel the algae living in their tissues and turn white. Scientists say global warming is the major factor driving more frequent bleaching events.

“It’s a bad sign on its own, but it doesn’t necessarily mean it will die,” Dr Wachenfeld said.

Surveys of the southern reef are likely to be completed next week when GBRMPA is expected to make a call on whether this recent event qualifies as a mass bleaching.

“There is certainly a risk that this is a mass bleaching event. We want to finalise the surveys and look at all the data and maps before we make a final decision,” Dr Wachenfeld said.

The northern section of the reef above Innisfail did not suffer similar damage this summer.

Dr Wachenfeld said the reef was a “living, resilient, beautiful system” under growing threat, but we must not lose hope for its long-term survival.

“It really worries me that people are getting an impression that things are worse than they really are because what we need right now is for people to be inspired and determined to greater action to protect the reef,” he said. “We need the strongest and fastest possible global emissions reduction.

“It’s very difficult to see this happening to the reef but we have to remember that the solution lies in long-term global emissions reduction and working to protect the resilience of the system.”

The first mass bleaching event occurred in 1998 and there have been five in the years since, which in total have affected more than 98 per cent of the reef. The current event was caused by a late summer heatwave.

Research commissioned by WWF-Australia from scientists at Climate Resource found Australia must ramp up emissions reduction to keep pace with the global effort needed to create a 50 per cent chance of keeping temperatures below 1.5 degrees. That means cutting Australia’s emissions 74 per cent, based on 2005 levels, by 2030 and reaching net zero by 2035.

The federal government is under pressure at home and abroad to increase its greenhouse gas emissions cuts. A delegation from UNESCO’s World Heritage Committee and scientists from the International Union for Conservation of Nature are due to inspect the reef on March 21 before they vote on downgrading its World Heritage status.