A Costcutter customer was left in stitches after spotting some rather unusual guidance alongside one of the products.

In a display stacked with condoms, a sign asked customers not to try the products on before buying them.

The photo was shared on Reddit, with users joking that the store should be offering a try before you buy policy so people can find the perfect fit with all their products.

However, the sign was rather deceptive, and wasn’t as rude as it looked on first glance as it actually referred to another product. 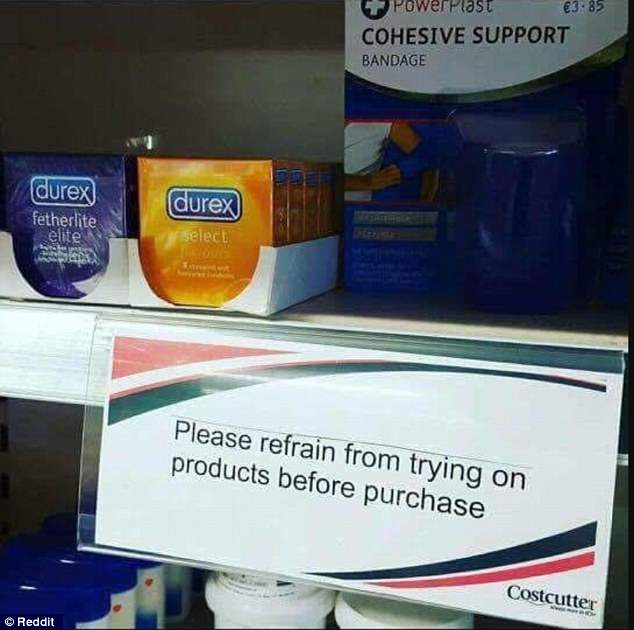 The condoms had clearly not been mistakenly placed by the sign, as they were left in their display packaging.

They were next to a sign that seemed to have been written by management, reading: ‘Please refrain from trying on products before purchase.’

The sign implied that customers had been trying on condoms before they bought them.

But on closer inspection, it seems the notice was actually referring to the bandages next to them in the display.

The image was shared by Reddit user Old-Blighty, who jokingly asked others on the message board to own up to being the one who put the sign there.

Some Reddit users joked that the store should have a try before you buy policy, while others were shocked that customers would try on bandages

One posted: ‘This is outrageous. Everyone knows they keep a spare to try on.’

‘HOW ELSE WOULD I KNOW WITCH ONES FIT? [sic]’ another said.

A third wrote: ‘They should have one tester of each size people can use to check.’

Others were confused about why customers would even need to try on bandages before they bought them.

One joked: ‘Who tries on a support bandage before buying one?! Bunch of savages in this country, honestly.’

‘I wonder how common the ”try before you buy” method actually happens for this?’ another agreed.

Meanwhile other shoppers expressed concerns over the product placement in store with one writing: ‘Who needs condoms and bandages? What kind of sex are people having?’