Female readers of a certain vintage will doubtless recall those pull-string dolls which had an unfortunate habit of appearing each year in children’s Christmas stockings.

With each yank of the cord, these creepy-looking figurines would emit a pre-programmed catchphrase designed to make children’s eyes illuminate with joy. The fun! The laughs!

Sadly, with technology being what it was in those days, their vocal repertoire was somewhat limited, leaving the joy short-lived. Come Boxing Day, at baby doll’s umpteenth rendition of ‘I wuv you’, most parents were tearing their hair out. There must be landfills around the country stocked to the brim with the ruddy things.

I was reminded of these irritating toys while observing Sir Keir Starmer at PMQs today as Labour’s leader attempted to tackle Rishi Sunak over the woeful state of our heath service. 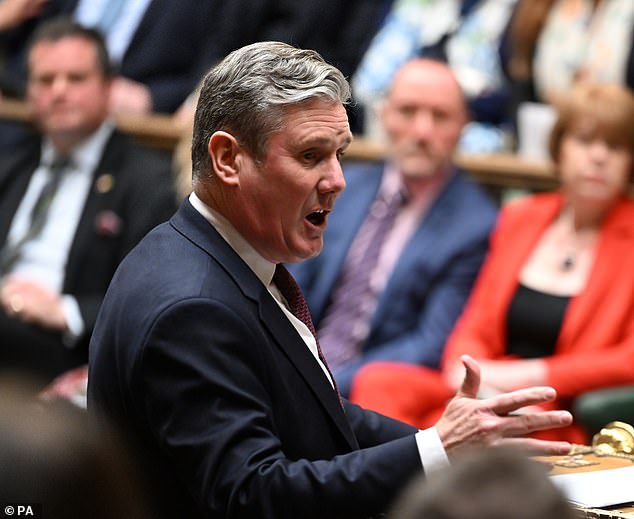 ‘One trick Sir Keir Starmer (pictured) is yet to master in these bouts is the ability to take a joke. Blair was a genius at it, often cracking a rueful smile when his opposite number got the better of him’

Rather than offer anything by way of a solution, Sir Keir simply squawked the same old slogans he’s been parroting for weeks, like a rusty platform Tannoy at Weston-Super-Mare station.

‘They’ve broken the NHS’, ‘They’ve gone from clapping nurses to sacking them’, ‘Scratch the surface and there’s nothing there’ ad infinitum, ad vomitum. Even Labour’s benches looked bored. Senseless.

The Prime Minister, meanwhile, had clearly had a three-Weetabix morning: fizzing with energy and enjoying his best performance against his opponent to date.

Sir Keir had no doubt hoped to spear the PM over his recent dithering concerning his healthcare arrangements. Unfortunately, Rishi swept away that banana skin early on by informing the House he had previously enjoyed the services of a private doctor but was also registered with an NHS GP. Ah, but since when? Didn’t matter. The fox was shot.

From that point, the PM remained comfortably on the front foot. He exposed the hopeless cul-de-sac into which Starmer had led Labour by opposing the Government’s proposed anti-strike Bill. 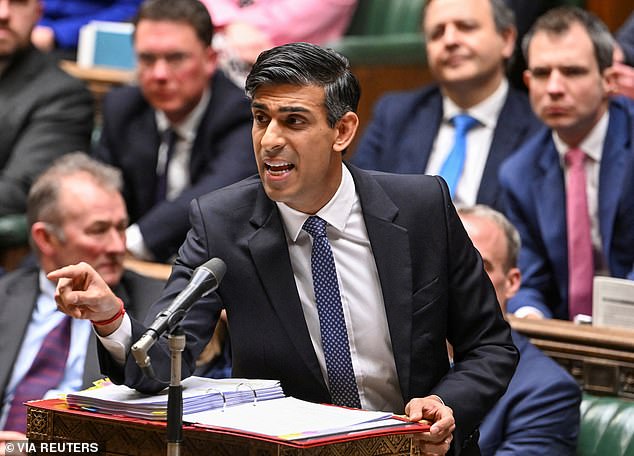 ‘The Prime Minister, meanwhile, had clearly had a three-Weetabix morning: fizzing with energy and enjoying his best performance against his opponent to date’

‘This shouldn’t be controversial,’ said Sunak, pointing out such laws were already in place in France, Germany and Spain. ‘He’s usually in favour of more European integration!’ he quipped. Tory roars.

Incidentally, one trick Sir Keir is yet to master in these bouts is the ability to take a joke. Blair was a genius at it, often cracking a rueful smile when his opposite number got the better of him. It showed he didn’t take himself too seriously. Voters like that.

Poke Starmer in the ribs, though, and he reacts as if someone’s just walked in on him emerging from the bathtub. He needs to lighten up.

No doubt today’s exchanges will soon be forgotten. But still, it felt significant to see an Opposition leader, amid a time of soaring inflation and a cost of living crisis, being so easily trounced.

The rest of the session was pretty much all local news. Plaid Cymru’s Liz Saville-Roberts was reprimanded by the Speaker for banging on far too long. ‘You can’t go on forever!’ wailed Sir Lindsay Hoyle. I bet she could you know.

The only other thing to report was that the SNP’s hitherto impressive leader Stephen Flynn suffered his first wobble when he mentioned the vast amounts of cash Boris Johnson is currently raking in on the speaking circuit.

He accused Rishi’s predecessor of ‘feathering his nest’ while many households were struggling to make ends meet. Rishi pointed out how one of Flynn’s own predecessors, Alex Salmond, had been fairly active feathering his own nest too, making mucho moolah from the Kremlin’s favourite mouthpiece, Russia Today. Och! The Scots Nat didn’t like that.

At that moment, another of Flynn’s well-padded predecessors, moneybags former investment banker Ian Blackford (Ross, Skye and Lochaber) decided to beat a hasty retreat towards the exit. Conscious, perhaps, Rishi might then make a jibe about his own considerable extra-curricular earnings. Either that, or the Commons canteen was suddenly open for business.