‘I can’t cope!’ Long Lost Family viewers are left in tears as a man who was kicked out of his family home being gay is reunited with his little sister after 40 YEARS

Two siblings were forced to spend 40 years apart because the brother had been kicked out of his family home by his parents for being gay.

Maureen Charlton, 55, from Stockton-on-Tees, had spent seven years looking for her brother Micheal when he was forced to leave when she was just 14 – and their mother banned any mention of him in their family.

When her mother died in 2007, Maureen learned the truth from her other brother Graham, that he had been told to leave for being gay – and thanks to the Long Lost Family team, the siblings were reunited.

Viewers were left in tears as the emotional reunion from 2014 was revisited in the ITV programme when they met for the first time after so long apart. 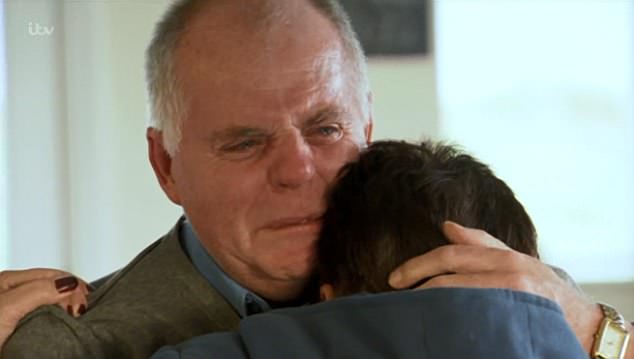 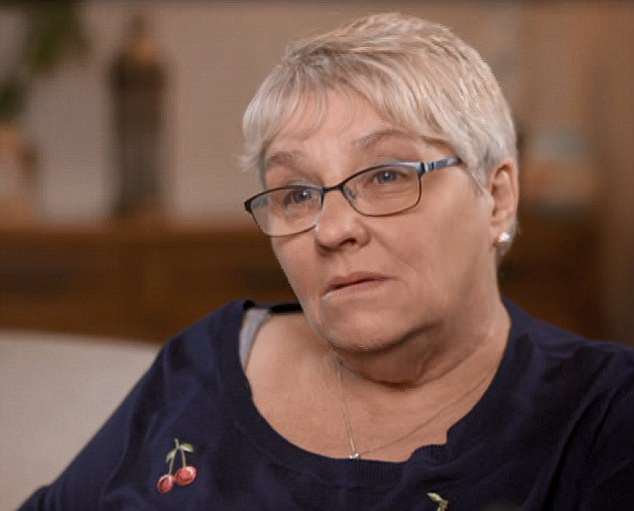 Maureen, pictured now, recalled what it was like meeting her brother after 40 years apart in the revisit show 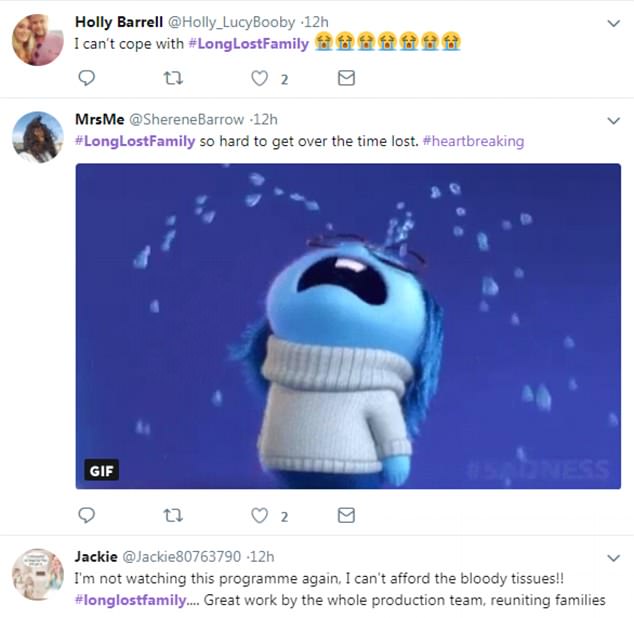 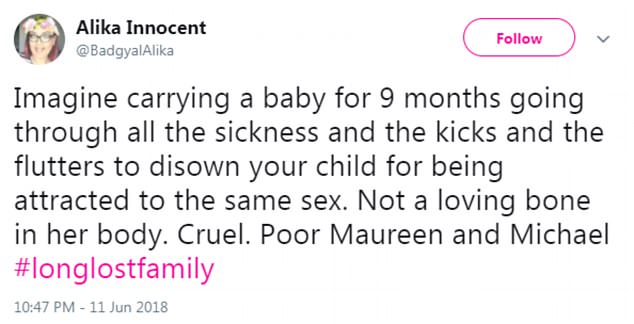 Viewers were heartbroken to learn how long Michael had been cast out of his family, saying they were in tears when he was reunited with his sister Maureen

Viewers wept as the pair tearfully embraced each other in the revisit show ‘What Happened Next’, which aired on Monday evening.

‘I can’t cope with #LongLostFamily,’ one viewer said with multiple crying emojis.

Others found the news that Michael had been rejected heartbreaking: ‘So sad that Michael’s parents kicked him out cause he was gay but so lovely his sister never gave up on him.’

‘Not welcome in his family because he was gay is heartbreaking. Michael is lovely,’ said another.

‘Imagine carrying a baby for 9 months going through all the sickness and the kicks and the flutters to disown your child for being attracted to the same sex. Not a loving bone in her body. Cruel. Poor Maureen and Michael,’ added one.

The pair had enjoyed their reunion after spending four decades apart, but it had been a difficult process, with Michael saying: ‘I didn’t know Maureen anymore.’

Maureen agreed, saying: ‘The Michael I remember was a typical 21-year-old.

‘If I’d walked past him in the street I wouldn’t have recognised him. All those years we’d wasted because people couldn’t be honest.’ 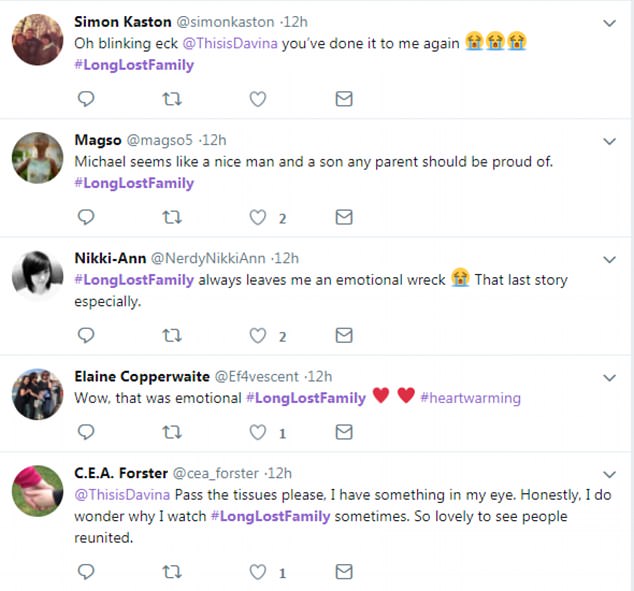 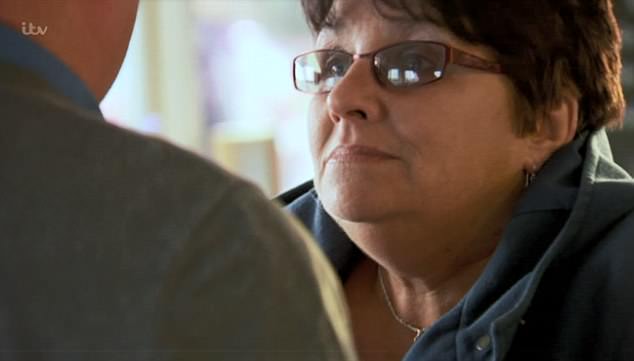 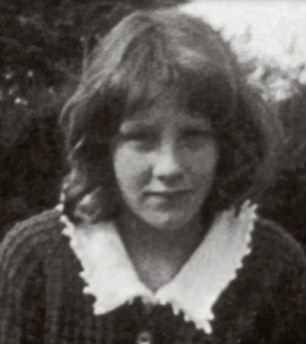 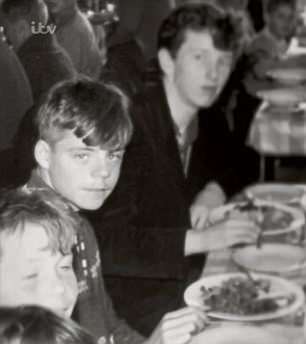 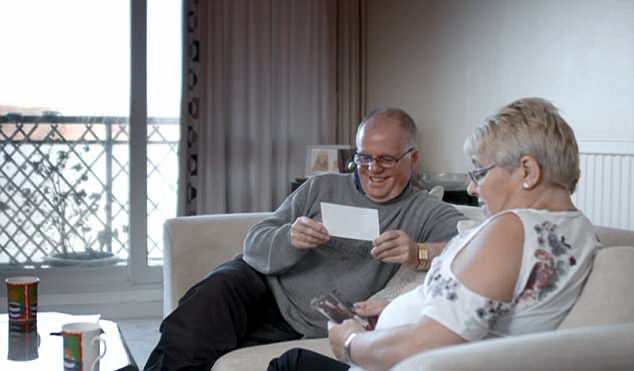 While Michael admitted the pain of being kept apart: ‘It still hurts to get told I wasn’t welcome in the house anymore, that just shattered me.

‘And it was meant – that was the last time I stepped foot in that house.

‘To suddenly realise that she [Maureen] did care, and she always had done, it was overwhelming. But I didn’t want to get hurt again.’

Maureen who described her brother as her ‘hero’ said: ‘I can understand where he was coming from, but it was hard for me as well – because I lost a brother I adored to bits, and for 40 years I had no idea why, and that was painful.

‘The more me and Michael have got closer, I think it’s healed us both.’

Michael said: ‘I am who I am, I would not alter my life and for Maureen to accept that, that makes a lot of difference, because I don’t feel half as empty, I feel as though I’ve got my family back. 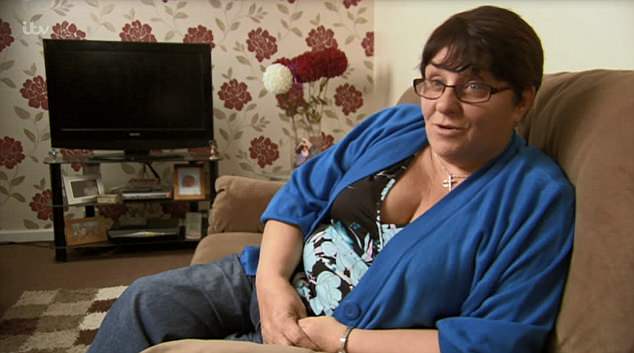 In the original Long Lost Family episode from 2014, Maureen explained how she had spent seven years searching for her brother Michael 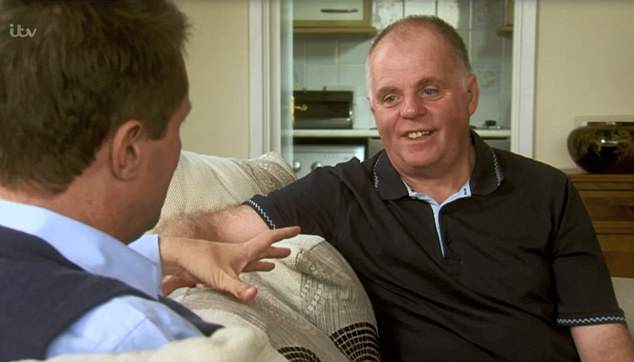 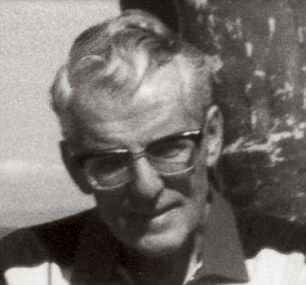 Maureen said her mother was strict growing up in their household, while their father was a quiet man 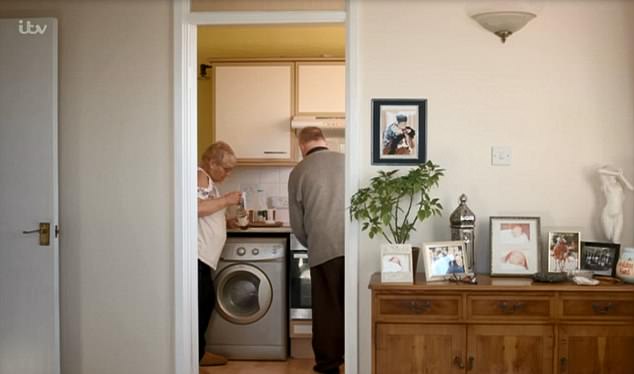 Despite it being a difficult process after first meeting seven years ago, they have worked on spending time catching up on each others’ lives

‘I feel like a big brother now. After all these years, I’ve got that feeling back.’

Maureen added: ‘Life wasn’t the same for 40 odd years, it was always as if a piece of me was missing, and now that piece is back. I couldn’t be more happy.’

In 1971 everything changed for Maureen when she came home and discovered Michael had gone and her mother told her never to mention him again as photos started to disappear.

‘It was just ‘OK he’s gone’. She was just erasing him from her memory.

‘I think she was hoping over the years that I would forget I ever had an elder brother.’

When her mother died in 2007 her family were discussing the funeral, and Graham turned to her and said that Michael was gay.

‘I was so mad. You mean to say to me that my brother has been living a separate life from us.’

She said if she’d have been older she would have been able to stand by him: ‘He’s gay, so what? That is a pathetic excuse to disown anyone. He was 21 years old and he must have been devastated.’

Long Lost Family: What Happened Next returns next Monday on ITV at 9pm