Peter Parker’s good fortune continued over the holiday weekend. Even with some mighty competition from new Matrix and Sing movies, and rising concerns over the Omicron variant, Spider-Man: No Way Home stayed in the No. 1 spot and crossed the $US1 billion ($1.38b) mark globally.

According to studio estimates on Sunday Spider-Man added $81.5 million over the three-day weekend, down 69% from its first weekend. The Sony and Marvel film has now grossed $467 million from North American theatres, more than doubling the domestic grosses of 2021’s previous No. 1 film, Shang-Chi and the Legend of the Ten Rings. 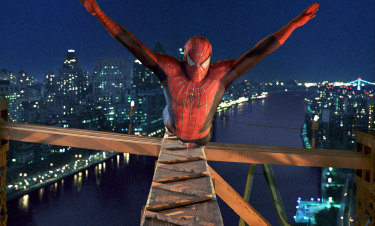 Tobey Maguire stars as Spider-Man in the title role in the new action adventure film.Credit:

With $587.1 million from 61 overseas markets, Spider-Man has grossed $1.05 billion globally, making it the highest earner of the pandemic. It’s the first film of the pandemic to cross $1 billion and the second-fastest film ever to do so — and this without the benefit of China release.

The animated musical Sing 2 features high-profile celebrity talent including Matthew McConaughey, Scarlett Johansson, Reese Witherspoon and Bono, as well as a jukebox soundtrack full of well-known hits. Since its release on Wednesday, it’s made $41 million ($1.6 million of that came from Thanksgiving weekend showings) from North America and $65 million worldwide. 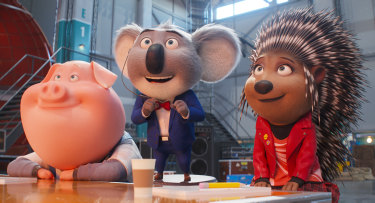 The fourth Matrix also opened on Wednesday and has earned an estimated $22.5 million in its first five days in North America. The film, directed by Lana Wachowski and starring Keanu Reeves and Carrie-Anne Moss, is currently streaming on HBO Max as well. Globally, it’s grossed $69.8 million to date.

And in fourth is Disney and 20th Century’s The King’s Man, a prequel to the action-comedy Kingsman series starring Ralph Fiennes. It came in slightly under expectations with $10 million from its first five days.