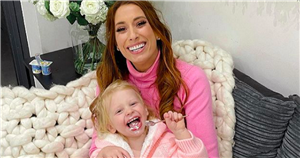 Stacey Solomon has shared her incredibly organised hospital bag online as she prepared to spend the night at hospital with her youngest son Rex following his recent accident.

The pregnant mum, 31, and her two year old son Rex spent the night in hospital following his “nightmare” accident which required stitches in his lip.

The panicked Loose Women panellist, who recently enjoyed a spa retreat with her sister, told her social media followers that he needed stitches after a nasty fall and would need to stay overnight so that he could have them put in first thing in the morning.

As her loving husband Joe Swash, 39, tended to the children’s dinner and bath, Stacey shared her organised hospital bag with her fans as she prepared for a night on the ward.

The Tap to Tidy sensation, who recently detailed her "weird" pregnancy cravings, shared her must-have items for the night away from home, which included Rex’s favourite blanket and rabbit teddy, fondly named Bun Bun, as well as the pillow from his bed and his night light.

In addition to his comfort items, she packed some essentials for the night such as a towel, slippers, spare clothes and chargers for her electrical devices to keep her anxious husband informed.

The doting mother also made sure to pack some small nibbles for the pair that will be easy for Rex to eat with his injury such as smoothies and dried fruit.

Stacey also packed a toiletries bag for herself, which included her bathroom necessities as well as a towel, comfortable fluffy slippers and a flask of freshly brewed tea for the long night ahead.

Like her son, the TV personality also packed her pillow and her laptop to keep the pair entertained along with her own blankets and bedding to help the cold hospital ward feel more like home.

At midnight, she updated her worried fans on Rex’s condition after they got settled into their new room for the night, and flaunted their movie set up on the hospital bed as they relaxed and watched Moana.

Her youngest was rushed to hospital on Monday afternoon after he suffered a nasty fall, and even though the doctors were able to fit Rex with butterfly strips to hold his cut together, Stacey revealed that the cut was so deep they needed proper stitches to help heal the wound.

She told her viewers: "The ward called, and they're really lovely, and they've got a bed. So they want us to come in tonight to make sure the stitches get done first thing in the morning with him.

"So I'm going to write a list, pack a bag, maybe have a shower, feed all the kids, and feed him up as much as I can before midnight."

The loving mum added: "Hopefully, it will get done quickly in the morning and we'll be back home. But happy, happy Monday!”