The stepfather of one of the victims of the Manchester terror attack has had a rather unusual tattoo in his honour, after opening up about the last time they saw each other.

Martyn Hett, 29, was one of 22 victims to lose their lives after a suicide bomber targeted an Ariana Grande concert at the Manchester Arena on May 22 last year.

His stepdad Stuart Murray appeared on last night’s episode of Tattoo Fixers, which saw him get a tattoo in tribute to Martyn, choosing have a photo of the Coronation Street super-fan in costume as his hero Deirdre Barlow recreated on his thigh.

During his emotional appearance on the E4 show Mr Murray recalled the last time he saw his stepson alive, and told how he now thinks Martyn had a ‘premonition’ that something was about to go wrong – because he gave his stepfather a hug and said a proper goodbye before he left for the gig.

His stepdad, who is married to Martyn’s mother Figen, said Martyn would be ‘screaming and howling’ with laughter if he knew that Mr Murray was getting the light-hearted tattoo in his honour.

But the tattoo had a more serious message, as he explained: ‘You can take the life out of Martyn but you can’t take Martyn out of our lives.’ 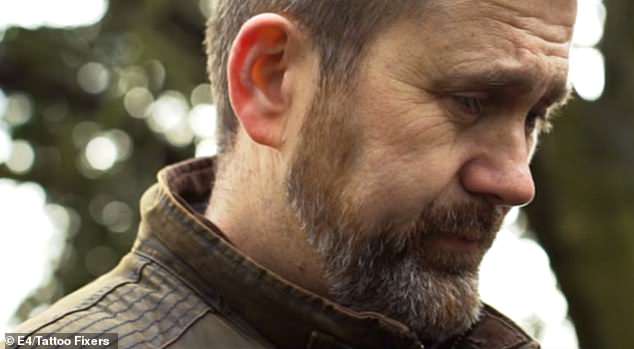 His stepdad Stuart Murray was emotional as he revealed that he wanted to bring back some of the joy that Martyn put into the world before he died. Pictured: Stuart on Tattoo Fixers on Monday night

The stepfather of Martyn Hett, 29, who was one of the victims of the Manchester bombings last year, had a tattoo tribute done of him on E4’s Tattoo Fixers. Martyn himself had appeared on the reality TV show before he died (pictured), getting a Deirde Barlow ink on his leg

Martyn’s death sent shock waves around the world, not least because the popular Coronation Street fan had a huge social media following and had appeared on reality shows including Come Dine With Me, as well as making his own appearance on Tattoo Fixers.

He appeared on the E4 series to get his tattoo of the name Deidre on his leg covered up with an elaborate portrait of her, which ultimately became the inspiration for Stuart’s ink.

Stuart decided to get a picture of Martyn in his Deirdre Halloween costume etched in the same place on his own leg, explaining that the joy that Martyn’s love of Corrie brought to people had been snatched away when he died.

Stuart explained: ‘I feel what Martyn created with his tattoo has been taken away from the earth by this person, but I want to put that back in the world. All that evil out there has taken something away from us and I want to stand up to it. 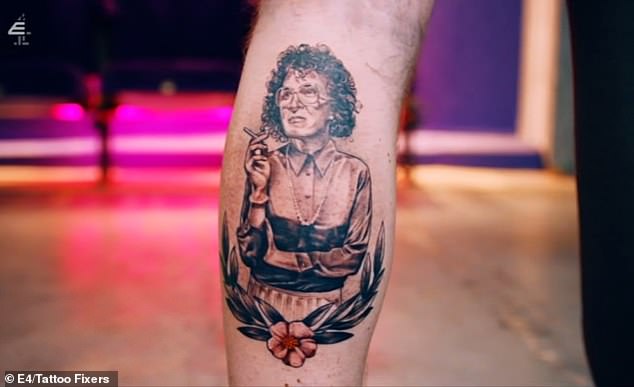 Mr Murray had a picture of Martyn dressed as Deidre for Halloween inked onto his leg (pictured), which was a tribute to his life and love for Coronation Street 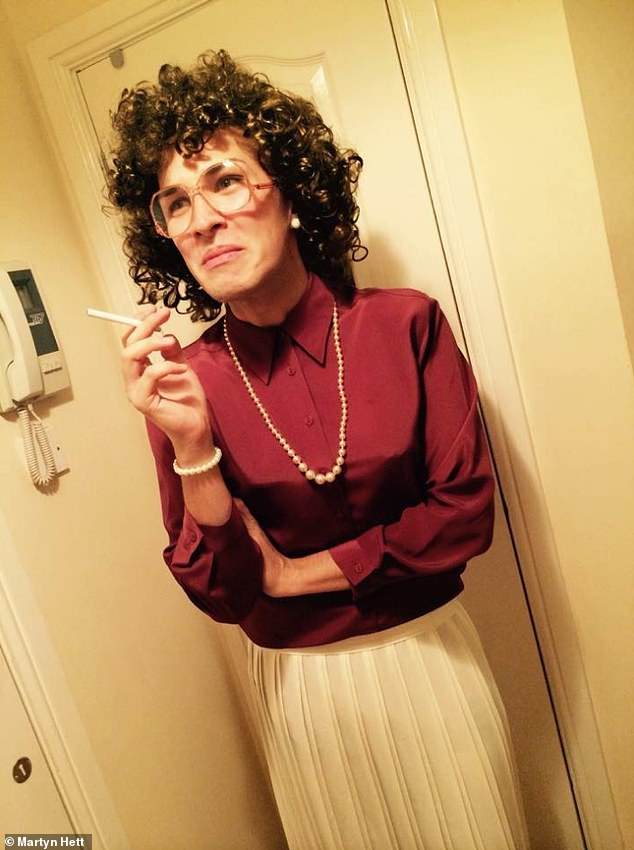 Martyn (pictured dressed up as Deidre) had a huge social media following before he died, due in part to his love for Coronation Street and viral posts he made about Deidre and other characters

WHAT HAPPENED ON THE NIGHT OF THE MANCHESTER ATTACK?

Twenty-two people were killed and over a 100 injured when a bomb went off in the foyer of the Manchester Arena on May 22 last year.

Suicide bomber Salman Abedi detonated his home-made device at 10.31pm  as 14,000 people streamed out at the end of an Ariana Grande concert.

Officers from British Transport Police were on scene one minute later and declared a major incident by 10.39pm.

However, a recent report found that a mix-up between police and the fire and rescue service meant the valuable assistance of fire crews was delayed by two hours and six minutes after the bombing.

Two weeks after the attack, Ariana Grande organised a One Love Manchester benefit concert to support the victims of the bombing.

‘All I’ve seen in Manchester is strength, resilience and love, and I think that message has to ring louder than any other message. We can get through anything together.’

Before he died Martyn was planning to go on a trip to the US and the family threw him a farewell party, which would turn out to be the last time Stuart saw him.

He said: ‘I remember him going to the door waving and then he came back and gave me another cuddle. It was almost as if he had a preminition or knew.

‘I suppose you look for all the positive things that happened, it’s the only way you can get through. I gave him a cuddle and I’d said everything I needed to say.’

Mr Murray claimed his stepson would be thrilled with the tattoo, saying: ‘He would be screaming and howling, laughing his head off and just thinking its so wonderful that I’m here.

‘He was a one-man party, he fitted more into his 29 years than most people would fit into a lifetime.’

His story left the Tattoo Fixers team in tears before they set to work on inking the design, which was copied from a photo of Martyn. 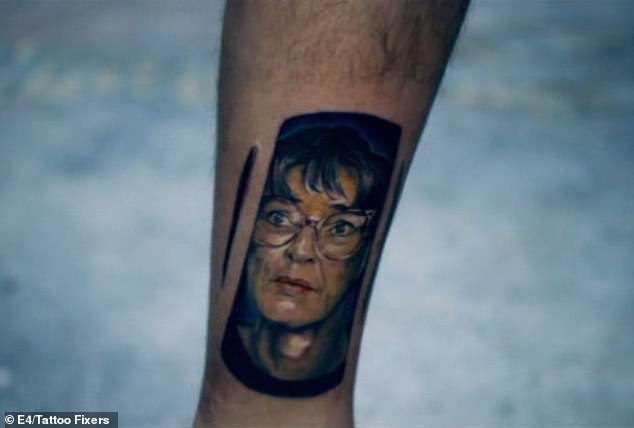 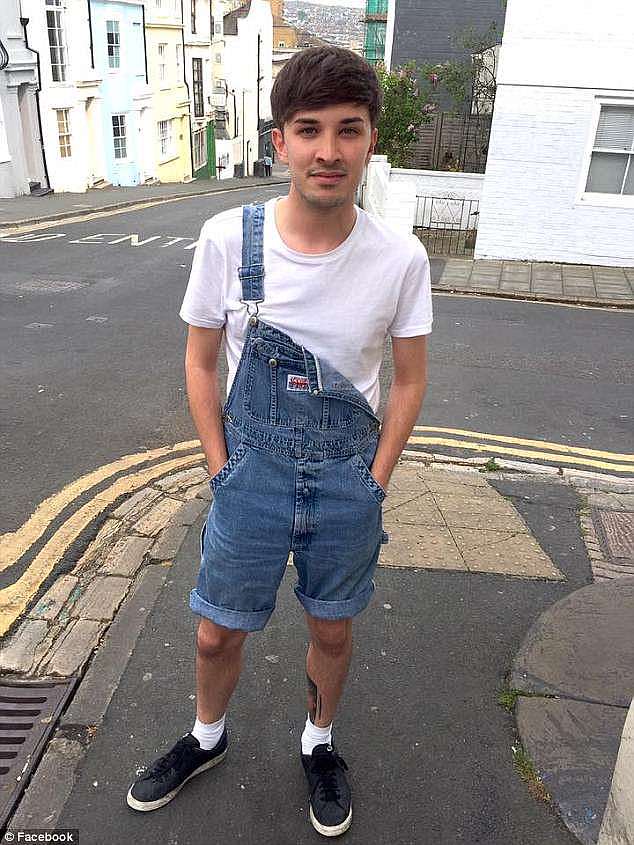 Mr Murray said Martyn would be ‘screaming and howling’ with laughter if he knew that Mr Murray was getting the light-hearted ink done. Pictured: Martyn in a photo posted to Facebook before he died

When it was done Stuart looked into the mirror to see his tattoo for the first time, and was clearly thrilled with the results.

He said: ‘Oh my word! That’s unbelievable. I tell you what that’s just like him it’s crazy. Fantastic.

‘The baton’s been passed now so they haven’t taken that away from us. You can take the life out of Martyn but you cant take Martyn out of our lives.’

Martyn’s family have now taken to social media to talk about Stuart’s appearance on the show and his tribute to him. 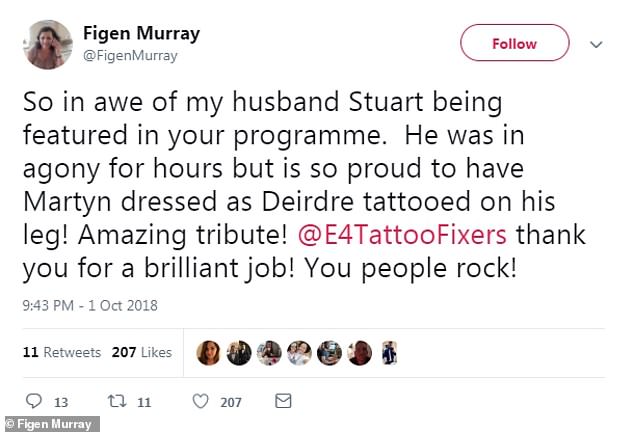 Martyn’s family have now taken to social media to talk about Stuart’s new Tattoo, including Martyn’s mother Figen Murray, who said she was ‘in awe’ of Stuart (pictured) 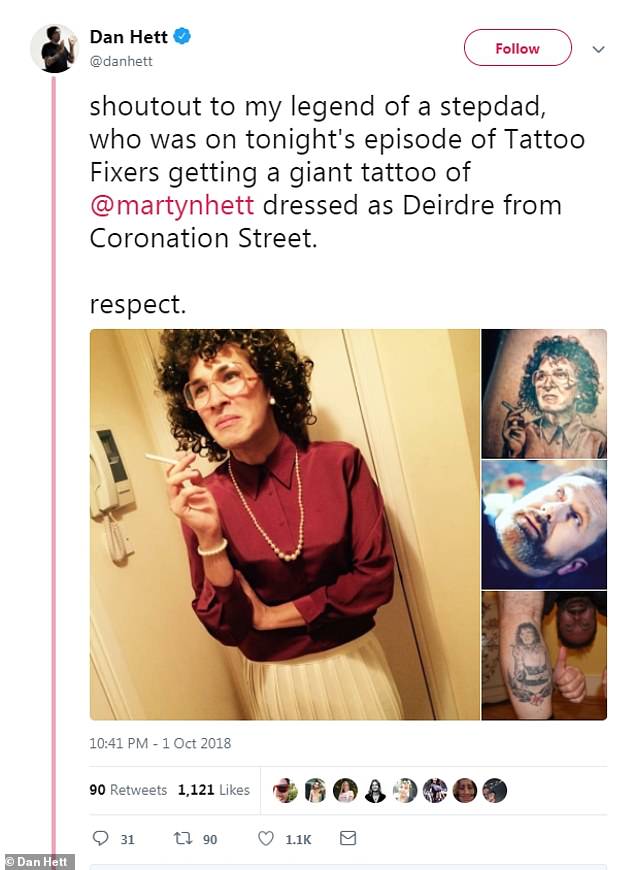 Martyn’s mother Figen said: ‘So in awe of my husband Stuart being featured in your programme. He was in agony for hours but is so proud to have Martyn dressed as Deirdre tattooed on his leg! Amazing tribute!

@E4TattooFixers thank you for a brilliant job! You people rock!’

His brother Dann posted: ‘Shoutout to my legend of a stepdad, who was on tonight’s episode of Tattoo Fixers getting a giant tattoo of dressed as Deirdre from Coronation Street. respect.’