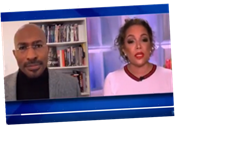 CNN contributor and political pundit Van Jones appeared on today’s episode of ABC’s The View to promote his recent documentary on navigating national unity, The Reunited States of America, which he co-produced with conservative host Meghan McCain. However, Jones was met with tough criticism from hosts Sunny Hostin and Ana Navarro on his role as a “political opportunist” within the Black community.

Hostin forthrightly asserted Jones has been “threading the middle” for providing “racial coverage for disgraced, twice-impeached President Trump” while simultaneously advocating on behalf of the Black community. The host called to memory Jones’ previous comments commending former President Trump’s work for opportunity zones and equity amongst historically Black colleges and universities, contrasting them with his words during the inauguration last month.

“Just recently you cried on CNN when Joe Biden was elected the 46th president, and you said it’s easier to be a parent now, character matters now, truth matters,” Hostin continued. “People in the Black community don’t trust you anymore. What is your response?”

He continued by reinterating his commitment to prison reform for marginalized communities. “My entire life has been about bringing people together to solve tough problems for the people at the bottom who don’t have anything. Whoever is in that White House, you have a responsibility to go in there and advocate and try to get people home out of prison. I’m going to keep doing it, whoever’s in that White House.”

Co-host Ana Navarro later mentioned Jones’ photograph with Candace Owens where he appeared seemingly amicable with the far-right conservative. Navarro questioned that the photo-op could yield Owens, notorious for her radical views, “legitimacy” in the public eye.

“I take smiling pictures with lots of people,” Jones responded. “I’ll take pictures with anybody. Laws are more important than people.”

Candace Owens took to Twitter to respond to a clip of Navarro’s questioning, stating “the radical Left wants to unite America by making it a criminal act to smile in pictures with conservatives.”

As expected, the clips led to Van Jones trending with many grateful the show costs held him accountable.