Mothers: Is there anything they can’t be blamed for?

If they’re not ruining the next generation by coddling them, they’re neglecting them by allowing too much screen time. Now they’re taking your local council rates and using it all on fancy childcare. 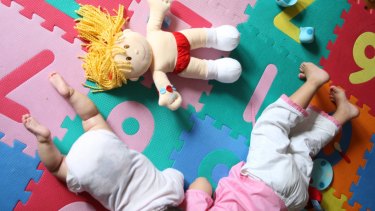 Mothers are still predominantly responsible for primary care and without affordable childcare many will lack access to work.Credit:Peter Braig

Despite the fact that we know that early learning and pre-school childcare are the most important years in terms of life-long development, and that high-quality early childhood education is an investment that pays off both for the child and community, many still pretend that it’s a luxury or an individual choice for which families should stump up the money.

As a nation, we long ago decided that universal public schooling was a good idea, but calls for universal early years’ education is just mothers being lazy and greedy, or so we are being told.

In my neck of the woods, Melbourne's City of Port Phillip, the local council is considering a range of options to defund childcare which could see to the closure of the council-run childcare centres – the kind that the data shows are higher quality and more affordable than private centres – or lead to significant fee increases.

In trying to sell the reduction in public funding for childcare, City of Port Phillip Mayor, Dick Gross, has gone one step further, not just blaming mothers for wanting more than their fair share of the public purse, but seemingly seeking to pit the entitled middle class families against deserving working class families.

In June, Cr Gross told The Age :“At the moment we are star graduates of the Peter Costello school of upper middle-class welfare. Social justice demands that we change.”

Of course, Cr Gross is politically astute enough not to directly point the finger at mothers, but let’s face it, as those still responsible for the vast majority of primary care of young children it is mothers whose career and life choices will bear the brunt of his proposed changes to childcare.

And it’s not just about mothers’ careers. In many households, even those that look wealthy from the outside, it is mothers who wear the financial costs of childcare. The little secret that mothers share among themselves is that there is “his money” and “her money”. And “her money” pays for childcare.

I know of women who live in renovated mini-mansions in tree-lined streets and have access to “his Lexus”, but don’t have enough money for a coffee or a second pair of jeans. And yes, we’re talking about families that would otherwise appear stable and functional.

The effects of this unequal expenditure on women’s wellbeing goes far beyond the early childhood years. When women pour most of their income into childcare, or have to drop out of the workforce because affordable care is not available, they lose the opportunity to accumulate assets, savings or superannuation.

It’s little wonder then, that the number of women over 55 who experience homelessness continues to increase.

Mother of two Dominique Barker who works in IT and sends her children to council-run childcare in Port Phillip says that when she goes back to work full-time next year her annual child care bill will be over $47,000 – and that’s after the childcare subsidy is applied.

If Cr Gross gets his way and defunds council childcare services, this figure will mostly likely soar higher.

“The price difference between the private centre and community centre is $43.00 per day for two children, or almost $9,000 a year annually,” says Ms Barker.

The belief that funding early years education is an undeserved hand-out to middle class mothers is so strong that Cr Gross is even ignoring his own appointed expert.

Dr Tim Moore, Senior Research Fellow at Murdoch Children’s Research Institute, who reviewed the current children’s services portfolio for the City of Port Phillip, says maintaining the current childcare services, even expanding them, would deliver the best immediate and long-term outcomes for all children, including those living in disadvantaged households.

“A universal service system approach is the best way of reaching vulnerable families,” says Dr Moore. “To ensure that those with additional needs are not neglected, universal services must be able to offer differential support according to increasing levels of need.”

And it’s not just some councillors in Port Phillip who are content to play fast and loose with accessible high-quality early years education.

The current Federal government childcare subsidy is framed not in terms of vital education but as a way to help women pay for someone to keep their kid alive while they’re at work.

The LNP-friendly Centre of Independent Studies has advocated reducing the quality of care by deregulating the industry and easing off on the child-to-staff ratios as a way to improve childcare affordability and accessibility.

While viewing early education as a human cattle yard is clearly short-sighted, the Centre of Independent Studies got something right: child care is unaffordable for many Australian families.

The annual HILDA survey released last month revealed that between 2002 and 2017 the real cost of childcare increased by 145 per cent.

Governments can’t do much about the unequal access to household income within couples’ finances, but they can at least make policies that support universal access to high quality childcare.

Instead of talking about cost-cutting and who does and does not deserve public funding, early years education is in desperate need of bold, courageous and evidence-based leadership from our politicians.