Education Minister James Merlino has been pushing for some students to return to school at the start of term 4 under the road map for the easing of restrictions to be announced on Sunday.

However, Chief Health Officer Brett Sutton advised he preferred to do so once the state approached the 80 per cent double dose vaccination target in November, rather than the ministers’ proposed dates from October 4. 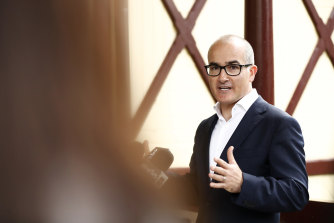 The details of the road map were still being thrashed out between Professor Sutton and cabinet on Saturday evening. It will outline Victoria’s path out of lockdowns in line with the nationally agreed targets of 70 and 80 per cent double dose vaccination coverage. The former is expected in mid to late October and the latter in November.

Several other ministers within Premier Daniel Andrews’ senior cabinet of eight are keen to see a swift return to the classroom, according to two sources not authorised to speak publicly, starting with year 12s on October 4 – the first day of term 4 – and prep to year 2 students on October 6.

Senior education sources told The Sunday Age that Mr Merlino, the deputy premier, had repeatedly voiced his view that schools should reopen for term 4 in Melbourne after prep, year 1, year 2 and year 12 students returned in regional Victoria last week.

“James is the advocate for schools, he’s the one who’ll get the pushback if students aren’t back on day one,” one source said.

Other government sources said they expected Victoria’s plan to be more conservative than that of NSW, where pubs and restaurants will reopen and five visitors will be allowed in the home once the 70 per cent double dose target is achieved. 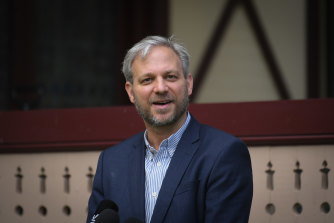 They said Professor Sutton had conveyed at meetings this week that the 80 per cent vaccination mark should be the trigger for the wider easing of restrictions to avoid hospitals being overrun.

The disagreements between ministers and the Chief Health Officer began midweek and while internal debates are not unusual, the friction highlights the difficulty the government faces in trying to restore normality for weary Victorians while maintaining control over case numbers and hospitalisations.

Government sources said ministers and Professor Sutton’s public health team had also not been in lock-step on elements of the move to allow picnics at the 70 per cent first dose target, as Mr Andrews announced on Thursday.

A Victorian government spokeswoman said work was ongoing on Saturday to finalise the road map and no final decisions had been made.

“These are complex decisions that require ongoing discussions across all areas of government to ensure we get the right settings in place,” she said.

Meanwhile, Mercy Hospital for Women in Melbourne’s north-east has been declared a tier-1 COVID-19 exposure site.

A patient tested positive for the virus mid-week, following a visit to the women’s outpatients’ clinic during her infectious period on Monday.

The Sunday Age understands 120 pregnant women will be forced to isolate as a result.

“Mercy Health has contacted patients and staff who were considered to be at risk of exposure and who were in the area at the time,” a Mercy Health spokesperson said.

“The hospital is taking an exceptionally cautious approach and in line with Department of Health advice has advised any patient at risk to get tested and isolate for 14 days.”

With Victoria edging towards a total 250 days in lockdown, the debate over the return of schools has intensified in recent weeks.

New evidence from the Murdoch Children’s Research Institute this week found children are far less likely than adults to suffer the debilitating effects of long COVID, but Victorian data earlier this month showed schools were associated with about one in four cases at the start of the latest wave.

About 20,000 VCE students and teachers have been vaccinated as part of a priority push over the past fortnight.

Hospitality operators had not received confirmation by Saturday evening that Victoria would follow NSW’s lead and allow them to reopen at 70 per cent double dose coverage, expected in mid to late October in Victoria.

Australian Hotels Association Victorian president David Canny said he expected venues to be able to sign up for a type of vaccination accreditation once they reopen, affirming both staff and patrons have been fully vaccinated.

Mr Canny said the association wanted a trial of the system to occur even before the state hit 70 per cent double dose vaccination.

“If venues don’t want to sign up, then you have stricter limits on the number of people who can enter,” he said.

“The government wants a vaccination model. If people can get to a pub once they’re jabbed, it will help the government achieve what they want to.”

Mr Canny added that it would not be viable for establishment to open only for outdoor seating.

“It has to be indoor and outdoor density limits across the board.”

Adding to the dilemma for the government, case numbers are expected to continue to rise this week after 535 new infections on Saturday.

Cases have also steadily grown in the regions in recent days with four infections in Geelong and five in Mitchell Shire on Saturday.

A woman in her 70s from Shepparton has become the ninth death in the state’s third wave as the number of Victorians in hospital continues to rise.

Victoria will hit 5000 active cases on Sunday, half of which are in Melbourne’s northern suburbs. A further 40 per cent are in the west, Mr Foley said.

Health Minister Martin Foley said there were now 207 people in hospital with the virus: 87 per cent were not vaccinated at all while the remainder were partially vaccinated.

Mr Foley added said the Commonwealth had not confirmed to states what their October allocation of Pfizer vaccinations will be but he expected it to be lower than September’s supply.

In response to Victoria’s uptick in cases, doctors and nurses have warned hospitals are at risk of becoming overwhelmed if Victoria opens up too rapidly.

NSW intends to push on with its reopening plan despite recording over 1000 cases every day since August 27, including 1331 on Saturday.