Sydney’s localised coronavirus outbreak has cast doubt over the mid-year budget update just a day after its release as signs grow job markets in key parts of rural Australia are failing to recover as quickly as the rest of the country.

Within the Morrison government there is concern a broadening of the Sydney outbreak could undermine the modest improvement in the budget that was revealed in the mid-year update. 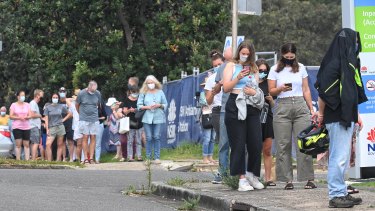 People line up for a COVID-19 test in Sydney. Even a localised outbreak could hurt the recently updated federal budget.Credit:Nick Moir

After forecasting in October a deficit of $213.7 billion for the current financial year, Treasurer Josh Frydenberg on Thursday said it was now likely to be $197.7 billion. Stronger iron ore prices plus better economic fundamentals were behind the improvement.

But the update also noted that the improvement could be undone even by a localised outbreak like that on Sydney’s northern beaches.

“COVID-19 outbreaks, especially those that would necessitate further containment measures, remain a significant risk and even localised outbreaks could have an impact on consumer and business confidence, weighing on consumption and investment,” Treasury warned.

In the wake of the Victorian shutdown, Treasury modelled the economic damage caused by rolling virus outbreaks that would require severe containment measures to a quarter of the economy. 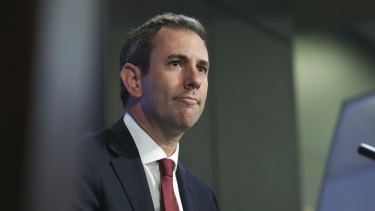 Shadow treasurer Jim Chalmers said there were just as large economic ramifications for not getting an outbreak under control.

“The economic consequences of getting it wrong, of letting this thing run rampant in our communities, is far, far greater than the economic costs of taking sensible steps as early as possible,” he said.

One factor behind the improvement in the budget update was the jobs market, with unemployment now expected to peak around 7.5 per cent by March next year. Early in the pandemic there were fears of double-digit unemployment.

But data from the Australian Bureau of Statistics shows job prospects in the inner city, tourist areas and agricultural regions are tepid.

Up to November 28, the number of jobs on company payrolls in inner city Melbourne were 11 per cent down on their pre-pandemic levels. Across inner Sydney and the city’s eastern suburbs, jobs are down by between 6.9 per cent and 6.1 per cent.

Darwin (down by 0.8 per cent) and inner Perth (down 2.3 per cent) have recovered the most of all the capitals.

But the ABS figures show rural areas are continuing to struggle.

The Mildura area of north-west Victoria and the lower Murray of south-west NSW both have payroll downs by 11.5 per cent on their pre-pandemic levels. Both are traditional heavy users of overseas visa workers for local fruit and vegetable crops.

Payrolls are down by 10.5 per cent across the south-east coast of Tasmania but payrolls across the state are down a much more modest 2.8 per cent.

In Queensland, where payrolls are down by 1.6 per cent, the Caboolture hinterland in the state’s south-east is down by 10.6 per cent.

Payrolls across the Northern Territory are up 0.5 per cent on their pre-pandemic level but in the Katherine region they are down by 5.3 per cent.