There is nothing like a strong contrast in a double bill and the Sydney Dance Company's latest is certainly that: a revival of polished grace and a premiere of something completely different. 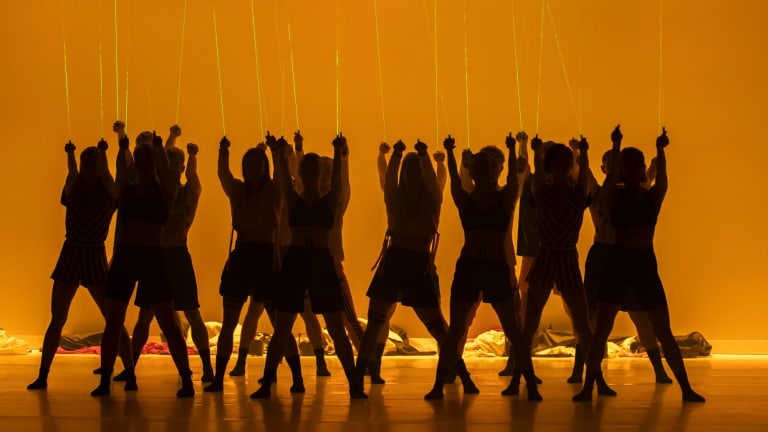 Forever and Ever is one half of a strongly contrasting double bill.Credit:Pedro Greig

Melbourne-based choreographer Antony Hamilton's much-anticipated Forever & Ever begins with a single dancer, Jesse Scales, setting the movement template for the piece on a darkened stage as the audience is still coming back at interval. She continues in silence as the lights come up in a long, admirably sustained solo with a cheeky edge.

Suddenly the music is upon us. The choreographer's composer brother, Julian Hamilton, is said in an article on the SDC website to have provided the title of the piece because of his compositional repetition – as in on and on, forever and ever – but while the beat is repeated almost ad infinitum, the colour and texture of the sound is varied and intriguing.

More so, perhaps, than the movement, which isolates small parts of the body and pulls them into action, as in a shoulder roll or a hip twist. It takes concentration to watch, let alone do – especially in a synchronised ensemble – but it becomes increasingly engrossing in combination with the sound.

A sense of humour pervades the piece, from the ensemble entrance in monkish costumes, faces masked, shuffling together like a giant caterpillar. When the dancers shed these cloaks, Paula Levis' costumes emerge in a coloured mix 'n' match that strips down even further to reveal black tabs on flesh in an unexpected variation of a lively imagination.

Combined with Benjamin Cisterne's vivid lighting, Forever & Ever is a visual installation experience. For the wider range of the company's dancing skills, it's good to have the companion work.

Rafael Bonachela's Frame of Mind first appeared in 2015 and it's worth seeing again. He says it's an examination of wanting to be in two places at once, and Ralph Myers' set places it in a pleasantly well-worn rehearsal room with a tall, handsome window onto the outside world.

Crisp, smoothly danced ensembles for 12 dancers come and go in interesting ways to the live performance, by the Australian String Quartet, of music by Bryce Dessner. Breakout highlights of smaller groups include a glorious duet of long, sinuous phrases by Charmene Yap and Davide Di Giovanni, and a quirky solo by Nelson Earl.