The Gruffalo has been entertaining children for decades, but one father has figured out a new way to liven up the classic tale.

Jacob Mitchell, from London, wanted to show his daughters that learning about spelling and reading can be fun and decided to put the infamous story to music.

He reads and rap-reads with his daughters every night and the Gruffalo is a hit story in their home.

The father, who works at Livingstone Primary school in North London, told Femail: ‘It’s fun for them and also for me, because I do it over nostalgic hip hop beats that I love. 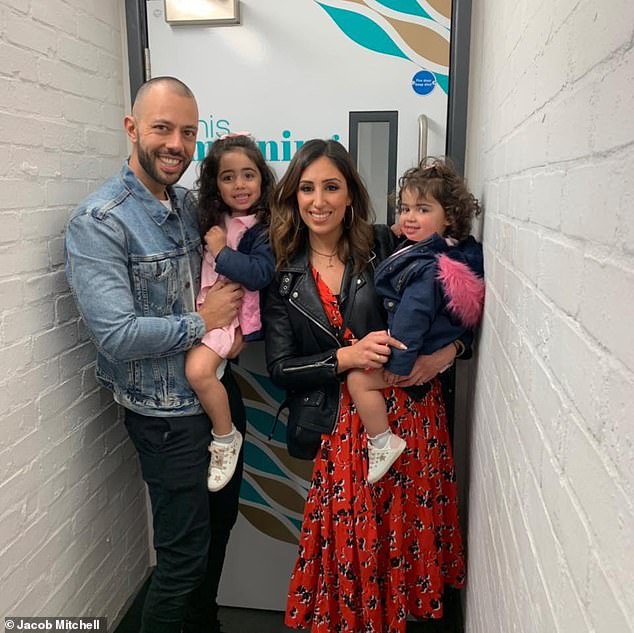 Teacher Jacob Mitchell, pictured left with his family, raps stories to his daughters and pupils to show them learning can be fun and that reading can change children’s lives 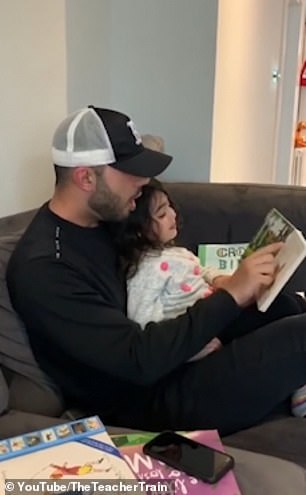 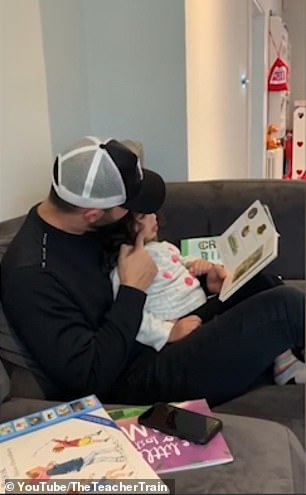 The father-of-two went viral after sharing a video of him rapping, left and right, The Gruffalo to his three-year-old daughter Ellie at their home in London

‘We do read one or two books normally each night as well and just love reading.’

Since posting his video the primary school teacher’s clip has been viewed more than six million times on Facebook and his family have even appeared on the Ellen show.

In the adorable viral clip Jacob is seen sitting on the sofa with his daughter Ellie, three, on his lap and a selection of children’s books around them.

As the music started Jacob began rapping the opening line: ‘A mouse took a stroll through the deep dark wood. A fox saw the mouse and the mouse looked good.’

As the story goes on the father did different voices shouting ‘where are you going’ and pointing to Ellie’s mouth and hands when the book mentions ‘teeth’ and ‘claws.’

By the end of the video it was Ellie’s turn to get involved and the little girl excitedly shouted ‘there’s no such thing as a Gruffalo’ as the short clip ends.

Hundreds of people have commented on the video, with one saying: ‘That’s better than 95 per cent of the current rap music out there.’ 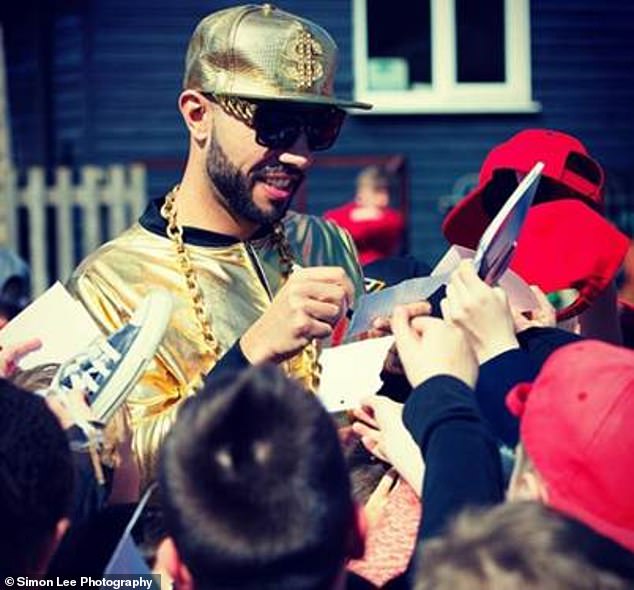 Jacob dresses up as rapper MC Grammar, pictured in his gold suit at Trimley St Mary school in Suffolk, and has 50 songs which all match an objective in the national curriculum

Another person wrote: ‘Serious talent. Thoroughly enjoyed your Gruffalo rap and Green Eggs & Ham on Ellen. I even teared up. God bless your family.’

While someone else said: ‘Amazing my autistic son would love you. You are what a real teacher should be. I would have stayed in school if you were my teacher.’

As well as the Gruffalo video, Jacob has filmed almost 50 other rap songs with each matching an objective in the national curriculum. 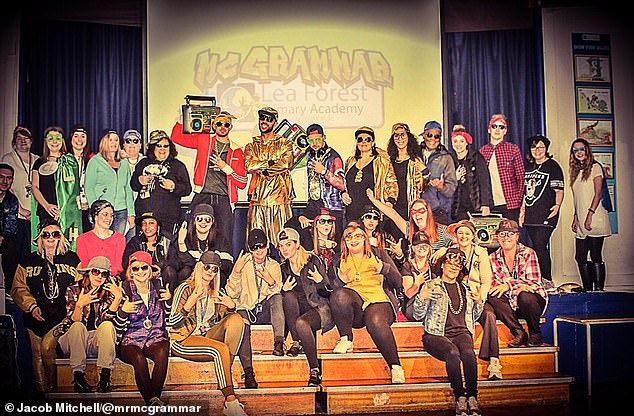 Jacob’s teaching resources are used by up to 20,000 children a day in seven countries. His is pictured performing as MC Grammar, centre, at a school with others dressed up as rappers 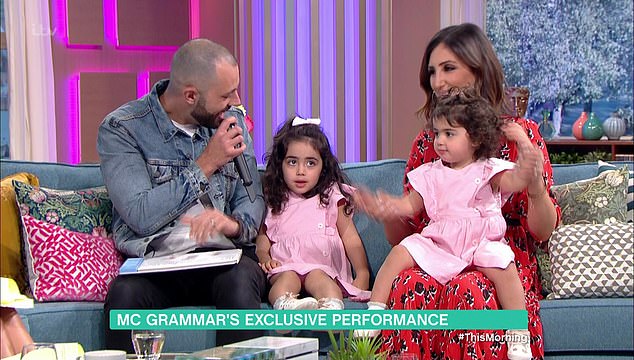 Since posting his Gruffalo video, Jacob and his family have been on This Morning to show off his musical skills

When he’s not teaching, Jacob is training other teachers and has a range of fun and free resources to make learning fun and runs Instagram account @mrmcgrammar.

Jacob said: ‘The rapping is all part of my resource MC Grammar an idea created to help children learn grammar and enjoy reading and writing through rap songs.

‘Each song matches an objective in the curriculum. I am a teacher, and through this experience up to 20,000 children a day are using my resources in seven countries.

‘I want to show the world how memorable, fun teaching can not only engage young minds but also change their lives.

‘If we I can get children engaged with learning then they’ll remember it and learn. It’s also great fun for the teachers who work tirelessly everyday.’ 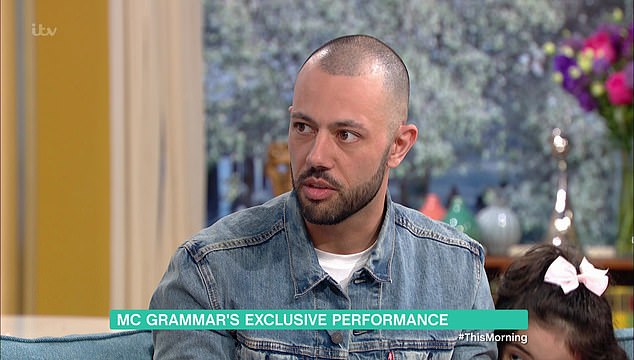 Jacob, pictured on This Morning, said he wants to get more children engaged with learning

Last week Jacob and his family were flown to America so that they could be guests on the Ellen show.

Jacob, his wife Andrea, and their daughters Ellie and Chloe all appeared on the show and said they ‘couldn’t believe’ they were in the U.S.

Jacob said: ‘It’s like a dream, I still can’t believe it. Last week we were rapping on our sofa and now we’re here on yours.

‘We always rap stories and now we’re in California and have spent the day at Universal Studios. It’s been the most incredible seven days of our lives.’ 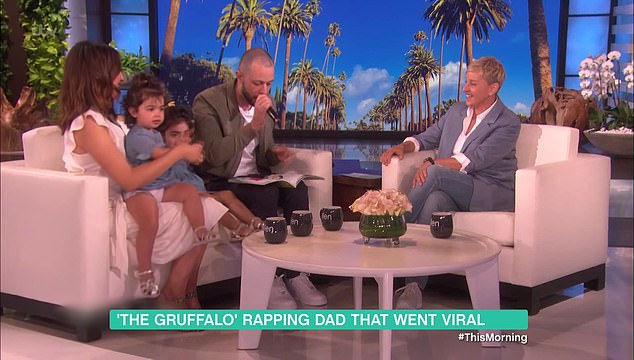 The Mitchell’s were also flown to America to appear on Ellen, pictured, where Jacob rapped some of Green Eggs And Ham

Jacob explained how he started making raps when he was trying to remember all the information in the curriculum himself.

He said that he soon realised the children were reacting well to his songs and it was getting knowledge across in an engaging way so he kept on rapping.

While on the show Jacob, who usually wears a gold suit when performing as MC Grammar, showed off his skills and rapped a section from Green Eggs and Ham.

The entire family got involved and when he said ‘Sam’ they replied with ‘I am.’

After rapping the Dr Seuss classic, Jacob was asked to rap the first page from Ellen’s book which revealed she would be giving the family $10,000.