It’s a dark and dazzling work, Gounod’s Faust and a profoundly satisfying experience when it’s done well. The Opera Australia version opening in Melbourne this month is directed by Britain’s Sir David McVicar and stars one of the best known figures on the Australian operatic stage, Teddy Tahu Rhodes, as the great satanic tempter. 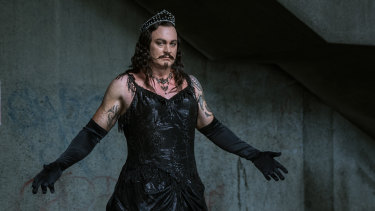 ‘‘I love this production. It has no gimmick and it’s uncut and presents the full ballet and all the rest of it. It’s an extraordinary combination of everything.’’ The setting is Gounod’s 19th-century Paris, and ‘‘the fear of the satanic is very much there,’’ says Tahu Rhodes. ‘‘But the way it’s brokered is fabulous.’’

As Mephistopheles, Tahu Rhodes is not technically the star – the nominal leads are Faust (Saimir Pirgu) and Marguerite (Maria Mudryak) – but he’s the source of the action and provides much of its dramatic fascination.
‘‘He runs the show,’’ Tahu Rhodes says. ‘‘It’s quite an acting role and there’s quite a lot of character singing. He’s not a caricature of a devil. And he can’t be played as young. You need a bit of gravitas and age behind it. You have to have an older person’s wisdom and experience.”

This is interesting from the sometime hero of Mozart’s Don Giovanni, who in his incarnation used to scamper about the stage in leather underpants. 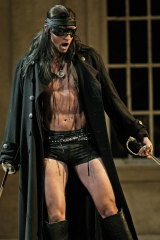 Is his voice in good nick? ‘‘Well, it’s become darker and deeper,’’ says the 53-year-old. ‘‘It has a wider vibrato and I’ve been singing the bass repertoire. Your voice ages like any other part of your body. It’s not always beautiful but I hope it’s in good nick. I hope it sounds all right.’’

Could he play the Don again now? ‘‘Well, he would have to be in his 50s and that would make him a slightly creepier Don. I think I’d be unlikely to be offered the part again. It’s possible someone might ask me to step in for someone else but basically your time comes and you’re lucky to get it when you do. I’m certainly not going to be leaping around in leathers again.’’

Instead he’s been doing things such as singing Scarpia, the deep-dyed villain of Puccini’s Tosca, which is technically a baritone part, most famously sung by Tito Gobbi. ‘‘But Scarpia can be sung as a bass,’’ says Tahu Rhodes. ‘‘If you’ve got an extended top [to your voice] you can do it.’’

He has also realised the classical singer’s crossover dream of attracting a mass audience in Rodgers and Hammerstein. South Pacific was the realisation of a fantasy for him. ‘‘Musically it was extraordinary,’’ he says, ‘‘because it was actually written for an opera singer.’’ He also performed in A Streetcar Named Desire, playing Stanley to Yvonne Kenny’s Blanche under the direction of filmmaker and opera buff Bruce Beresford.

So does the man who is about to strut his stuff as a wise and wily well of wickedness as Mephistopheles think of himself as a New Zealander or an Australian? ‘‘I was born in New Zealand and raised in New Zealand and I’ll always identify as a New Zealander. I don’t spend my time dreaming about New Zealand but sometimes I just have to go back … and breathe in the air.’’ He laughs and adds: ‘‘Look, I enjoy living in Melbourne. The weather’s so changeable you could be in Christchurch.’’

He is very much at home with the idea of moodiness, and says he is delighted to be playing that mercurial ringmaster Mephistopheles.

‘‘I’m a singer,’’ he says. ‘‘But there’s a lot of character acting in this role and unlike a lot of bass roles it’s not just dark, it has a lot of light at the same time. With some villains like Scarpia you feel an instant dislike. With Mephistopheles there’s such light and shade – such lightness juxtaposed with such darkness and evil. It’s as though the character is not so much evil in himself, it’s what he places in front of the other characters. He offers a choice which will reveal the other characters’ capacity for bad or good.’’

It’s nifty ground for an opera singer heading slowly towards his Indian summer to be occupying: the supreme charisma of the sinister charmer who tempts people almost as a joke to fall into the abyss. People who love Teddy Tahu Rhodes and people who love to hate him are likely to be compelled by just how dark and nonchalant he gets as the great naysayer of Gounod’s opera.

Faust is at the State Theatre, November 27 to December 7.