Farrah Abraham became famous on the popular reality television show Teen Mom. Her rise to fame was an unplanned teenage pregnancy, which resulted in her now 9-year-old daughter, Sophia. These days, Farrah Abraham is getting media attention for something other than simply being young and pregnant. Her parenting techniques have come under fire more than a dozen times. 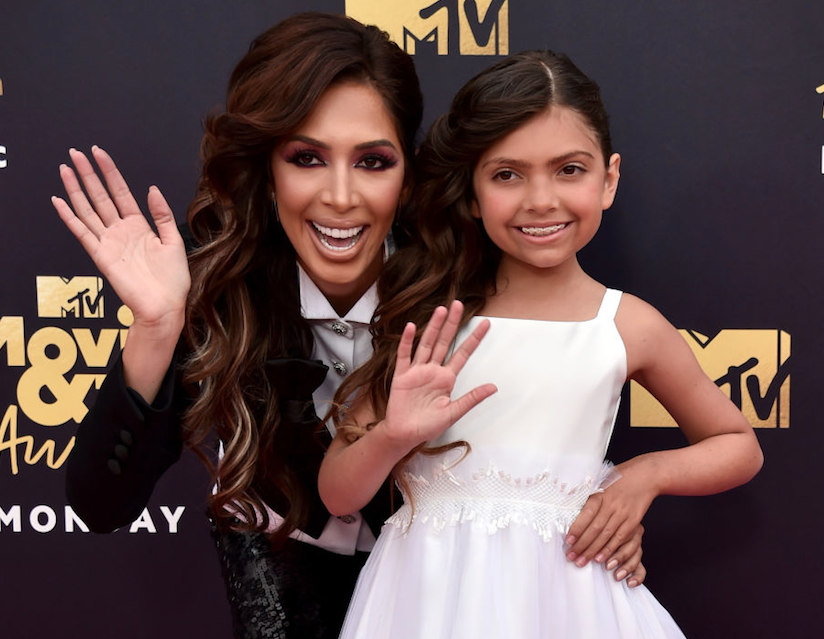 Many will remember how Abraham was criticized for allowing her daughter (as young as 6) wear a full face of makeup, and forced her to do her eyebrows. Fans of the show may also know that daughter Sophia isn’t allowed to choose her own clothes – ever. But these aren’t even the strangest parenting tactics (or lack thereof) practiced by the Teen Mom star. So what is the strangest thing Farrah Abraham does as a mom?

Farrah Abraham is more a friend than a mom

It’s apparent in nearly any image of Farrah Abraham and daughter Sophia that the two do not have a typical mother-daughter relationship. In fact, Farrah is less of a mom and more of a friend. This is even more obvious when you realize Farrah Abraham doesn’t censor anything that young Sophia watches, listens to, reads, or does.

Sophia is allowed to do anything she wants. This includes social media, where the 9 year old child is active on both Twitter and Instagram. Not only does she have accounts, but they’re public accounts and Sophia is allowed to post whatever she wants – including glamour shots that many feel are way too risque and adult for a preteen.

Sophia is expected to “live her own life”

To further show just how far Farrah Abraham takes being a friend versus a mother, she expects her daughter to have her own life. Farrah is quoted as saying “She [Sophia] has her own life and is doing her own thing, and I’m doing mine.” This statement was revealed in an interview with InTouch Weekly, and to say people everywhere were shocked is an understatement.

Best breakfast sausage ever! Could life get any better?! ☀️Gonna miss my @ayadamaldivesresort (breakfast served with this View is needed every day) with my princess @sophialabraham ❤️ . . #wcw #breakfast #farrahabraham #infinitypool #floatingbreakfast #instagram #swipe

According to Empowering Parents, children actually crave structure, boundaries, and well-defined limits. It allows them to know what to expect of the world, and what is expected of them. Without the guidance a real parent can give their child, children turn into adults who flounder about the world without any clue as to what they should be doing with their lives.

Not only this, but it can also lead to a lack of respect for all adults as being a “friend” to your children can mean you’ve lost control. Once a parent loses control of their child, it can lead to a significant amount of issues as they grow and mature.

Modern Mom has more to say on the topic of being a child’s mom instead of their best friend. They state that children need strong role models to show them what is or is not okay. Basically, to teach them how to be a good person. In order to do this, a parent must not only provide guidelines and structure for a child, but also model that behavior.

Farrah Abraham is notorious for getting in trouble and has made headlines numerous times for her drama. This means that not only is she not providing rules for Sophia, but she isn’t modeling good behavior, either. This is a very dangerous situation for young Sophia’s future.