Texas Breeder Deer May Have Spread Brain Disease Into The Wild

AUSTIN, Texas — State wildlife officials are struggling to trace and halt the spread of deer infected with a contagious brain disease after breeders sold potentially infected animals to hundreds of buyers and released them on game ranches across the state.

Deer at three breeding facilities tested positive for chronic wasting disease in March. Two sites are in the county of Uvalde, west of San Antonio, and owned by the same breeder, while the third is in Hunt County, outside Dallas. Two more facilities that received deer from the Uvalde sites have had positive cases since then, bringing the total of known infected deer to 10 so far.

Officials don’t know how many infected animals the breeders might have sold. Deer breeding is a major business in Texas, where customers will often pay private ranches enclosed by high fencing $10,000 or more to hunt bucks created with the help of artificial insemination, captive rearing and supplemental feed. 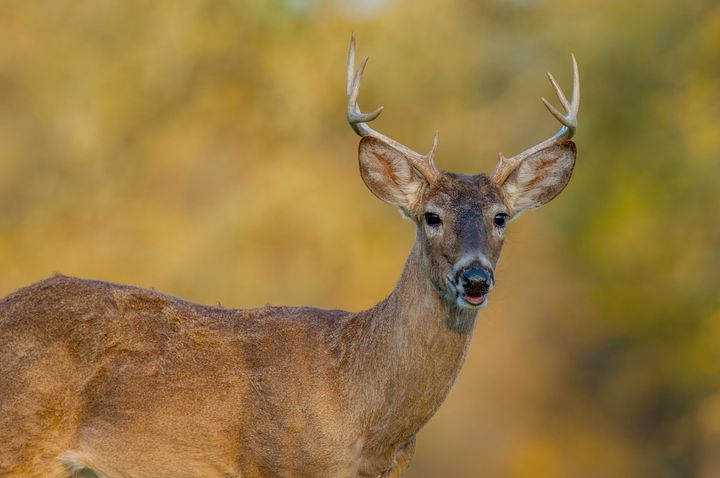 The spread of CWD could have severe implications for the state’s wildlife. The disease causes fatal neurodegeneration in cervids like deer, elk and moose.

The state’s tracing effort has identified 267 sites that received deer from what have grown to five facilities with positive results — including 101 sites where deer bred in captivity were released.

High fences block movements in and out of the game ranches that normally buy and release deer. But it’s not uncommon for deer to escape, either by making it over the high fencing or getting past it when damaged. Severe weather, like the February winter storm, can bring down fencing.

That raises the possibility that the disease could have spread from captive deer to wild ones across the state, said Mitch Lockwood, big game program director for the Texas Parks and Wildlife Department.

“That’s what keeps me up at night,” Lockwood told HuffPost. “We hope and pray that didn’t happen. But we can’t find those deer.”

More than half of the animals traced back to the original CWD outbreaks remain untested, Lockwood said. In some cases, state officials are waiting for pending test results before asking the breeder to test suspect deer. In a few cases, breeders have refused to test them, hoping to buy enough time for their fawns to drop first.

Testing for CWD usually requires extracting lymph nodes or brain stem tissue from a carcass. In most cases, buyers have to kill the animals they bought to check for the disease, though live testing is becoming increasingly available.

Those delays could make it easier for CWD to spread. The state requires quarantine for deer exposed to the disease. But if infected animals moved from any of the sites that have yet to submit their tests, they could expose deer that can still legally move around the state.

One reason for the delay is that the state used to let deer breeders batch tissue samples and send them all in ahead of renewing their breeding licenses at the end of the year. The Texas Parks and Wildlife Commission changed that last year, instead requiring samples be sent in within two weeks of a deer’s death.

But the change only took effect in March, shortly before the first positive tests came back. By then, hundreds of potentially exposed deer had already spent months moving across the states and onto game ranches.

“You can’t put up a containment zone around these sites anymore,” Treadwell told HuffPost. “I don’t think moving them around is such a good idea anymore.”

An Incurable Disease That Tends To Spread

It’s unclear whether the disease can jump to humans, like mad cow can. The Centers for Disease Control and Prevention recommends against eating CWD-positive deer meat.

Wildlife biologists consider the disease one of the most severe threats to the country’s deer herds. Once it takes root in a population, wildlife agencies have no method for removing it. Instead, they hope to contain it — a strategy that usually involves reducing herd size and killing off more of the older bucks, among whom the illness usually concentrates.

CWD first appeared in Texas back in 2012 in free-ranging mule deer near the New Mexico border. Since then, the state has identified 66 wild deer infected with the disease in seven counties across the state.

More than 70% of the state’s 224 positive tests over the last nine years occurred either among captive deer or at release sites. CWD was identified in breeder deer at release sites in Medina County, west of San Antonio, a year before free-ranging deer first tested positive there in 2017. Genetic testing later showed that the infected free-ranging deer appeared more closely related to nearby captive animals than wild ones.

The recent spate of CWD cases and possible spread to the wild has fueled long-standing concerns about the controversial deer breeder business in Texas.

Texas is one of a dozen states that allows private citizens to breed deer, but classify them as state-managed wildlife, according to a 2018 report from the Quality Deer Management Association. Most states classify captive deer as livestock. Nearly 1,000 Texans are licensed to breed deer.

Selectively breeding deer and raising them in captivity allows breeders to create bucks with bigger bodies and antlers, driving higher prices at private hunting operations that use them.

The expansion of privatized hunting of artificially bred deer over the last two decades has given many ranches an opportunity to stay intact and economically viable — an ecological win in a state where around 95% of land is privately held and large holdings tend to get subdivided over time. The acreage of many game ranches far exceeds a typical whitetail deer’s range.

But most conservation groups oppose the artificial manipulation of deer herds and view the high fences blocking their movements as an effective privatization of wildlife, which is managed in the United States as a public resource.

While captive deer are no more or less susceptible to CWD than wild ones, critics have long contended that deer breeders spread disease by concentrating animals together, then moving them across distances far greater than they would range if left to wander freely.

It’s unlikely that CWD spread from free-ranging deer into the breeder pens. A wild deer would first have to jump a high fence to get onto the breeder’s property, and then jump a second one to get into the pen.

One possibility is that CWD spread to the facilities through dead deer instead of live ones. Diseased prions can travel on the carcass of a cervid killed elsewhere, like when a hunter travels to an area where the disease is present and brings meat home.

Raising awareness among any individuals who move deer and their carcasses ― whether breeders, live trappers or hunters ― is the best way to check CWD’s spread, according to Lockwood.

“It is unquestionably the biggest threat facing North American deer,” Lockwood said. “And it will only get worse if it spreads.”