Ask any New Yorker right now and they’ll tell you it feels like the entire city is covered in permafrost despite the few unusual days of sunshine that have managed to wedge their way into the gray. If you’re equally as cold, the new CLOT x Converse North Pole Collection will be the answer to your fuzziest footwear dreams. It combines the classic appeal of a Chuck with some seriously warm materials and is guaranteed to keep your toes happy on even the coldest of days. Trust me, it’s one sneaker drop that anyone on the East Coast definitely needs to get in on.

If you’re not familiar with CLOT, it’s a streetwear brand that was founded in 2003 and has since collaborated with Nike, Disney, Adidas, and more. But as noted on their website, their reach goes way beyond clothes. "[CLOT’s] a creative moment that celebrates individuality and injects life and character to local culture. Instilling creativity and inspiring perspectives in hopes of bridging the gap between the East and West is core to the brand." In 2017, they dropped a collection called "80 Degrees North," which explored the coldest part of the earth through fashion by incorporating textures and patterns found in the Arctic and now, they’re following up the collection with a similarly inspired collaboration with Converse. 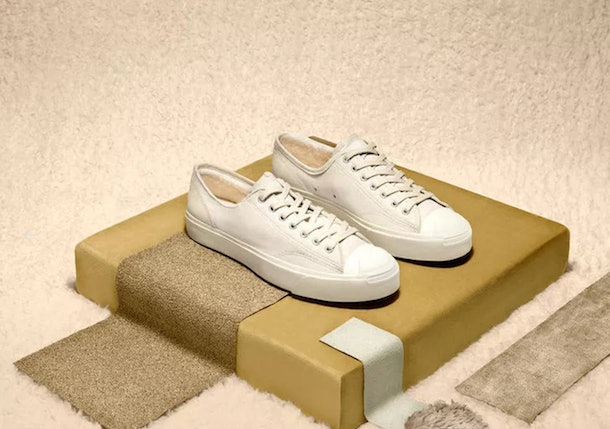 The footwear pack includes two classic Chuck styles reimagined in the coziest of ways. First up is the Jack Purcell low top style, which features an off-white canvas upper and matching toe caps and laces. It looks like a pretty standard Converse offering until you look inside the shoe, which is insulated with a matching off-white uber fuzzy material. It looks like the stuff that would line your favorite winter slippers and I can only imagine that it might feel like walking through clouds. 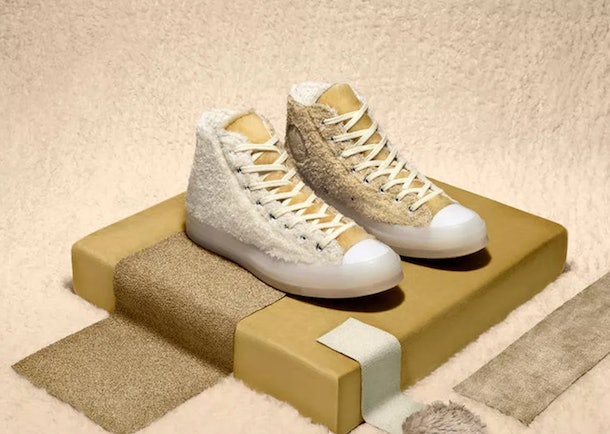 The piece de la resistance, however, is the Chuck 70 high top, which is also insulated with the fuzzy material, except this time inside and out. An off-white fur adorns the interior and outer side of the shoe, while a deeper beige colored fur covers the inner side of the shoe. Somehow, the style still manages to look really, really cool, despite its puffy design, but who cares about coolness when optimal comfort is involved? A third fuzzy fabric—this one less like shearling and in a slightly more golden hue—makes up the tongue, which is held in place by off-white laces. A silver zip-up heel detail means you won’t have to fumble with tying and untying these every day (ideal for when your fingers are numb from the cold), while a semi-transparent sole finishes off the shoe with an extra cool detail. 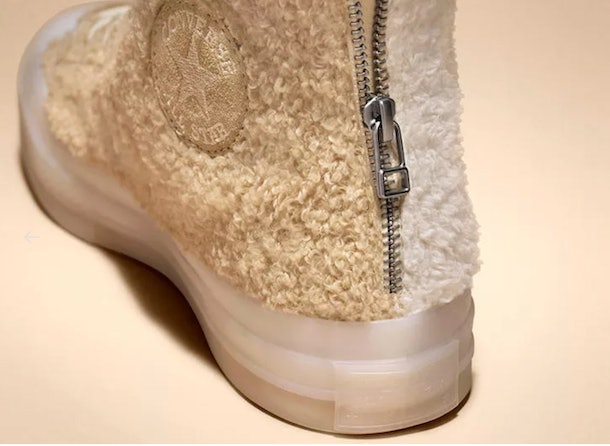 Fleece has been a huge clothing trend all winter long and it seems it’s finally making its way down to our feet. Who wouldn’t want to feel like they were tip-toeing across a giant teddy bear’s belly all day long and remain hygge AF while doing it? Both sneakers are set to drop on February 1 online at converse.com and in Converse stores.