And so the wind blows, the tides turn and the climate inches through change.

Seven years ago, Tony Abbott’s excitable forces were dancing confected jigs and high-fiving and embracing each other on the floor of the parliament in florid celebration of the end of what was misnamed the carbon tax.

Almost none of those self-conscious revellers remain in today’s federal parliament. 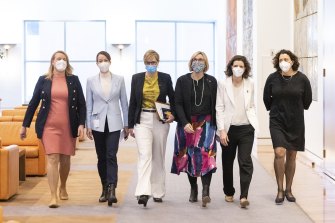 ‘Teal’ independent MPs voted with Greens and Laborites of every factional hue to pass the climate bill.Credit:Alex Ellinghausen

Cast aside by the relentless arc of time and the shifting mood of Australia’s voters, yesterday’s merrymakers could only look on from afar, presumably aghast, as a newly triumphant band struck up the latest parliamentary victory march concerning climate change.

Here was a festival for a colourful new age. Greens, teals, and Laborites of every factional hue cavorted – or at least voted – together.

And yet, there was no jiving, high-fiving or even discernible embracing. A brief outbreak of applause from the independents’ corner, to be sure, but in the end, it was a relatively sober moment.

And yet, this was a moment of high significance. A new Climate Change Bill, setting a minimum 43 per cent cut in carbon emissions by 2030, had sailed through the House of Representatives.

Glory be, the legislation was bolstered by amendments demanding the government take actual scientific advice when setting new targets.

The gloom settling over the vanquished Liberals and Nationals deepened as history tripped away from their grasp.

They could do nothing but demand a series of doomed divisions – the ringing of bells, the locking of doors, the counting of ayes and noes, the inevitable defeat – intended to slow the inevitable.

These remnants of a once-dominant Coalition, having spent the better part of a decade turning themselves inside out to ensure climate action never led, like dancing, to anything too vigorous, were left without an embrace among them.

The Nationals were so bent on opposing everything that they even voted against an amendment by independent Helen Haines of Indi, and moved by fellow Independent Rebekha Sharkie of Mayo – both country electorates – designed to assist rural and regional districts.

The amendments require the Climate Change Authority to ensure any measures to respond to climate change should boost economic, employment and social benefits in rural and regional Australia.

Labor supported the Haines amendments, just as it supported other amendments by crossbenchers, even if the government didn’t need the numbers.

Minister for Climate Change Chris Bowen, rubbing it in, described Haines’s ideas as “very sensible”. Haines rubbed it in further by noting on Twitter (she is in COVID-19 isolation) the Coalition parties, having opposed everything, hadn’t bothered to come up with a single amendment among them. 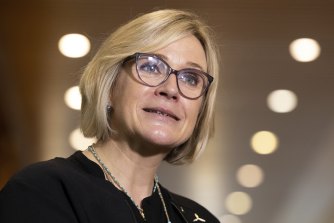 Independent Zali Steggall grew so expansive she declared: “The climate wars are almost over.”

Given the history, this seemed optimistic.

But it deserved, surely, an outbreak of celebrating on the floor of the House of Representatives that left the old Abbott government’s “death of the carbon tax” shindig looking lame.

In the end, however, everyone simply trooped away, trailing their wins and their losses.

Exhaustion, after all the years of those climate wars, had swept the day.