Sixteen thousand multi-hued mobiles shimmer, sparkle and dance, given life by the rising and falling eddies of air in the vast public space at the entrance of Carriageworks.

The overall effect is joyful and festive – especially in the lead-up to Christmas – and a little disorienting as the objects constantly spin in and out of focus. 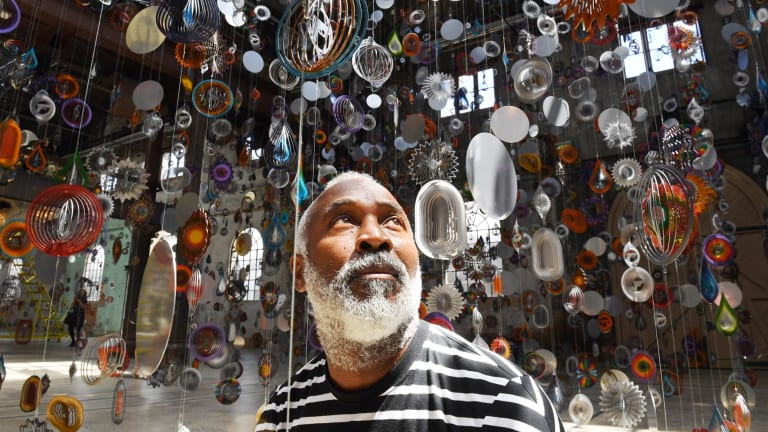 Kinetic Spinner Forest is the work of US artist Nick Cave. But a moment's deeper investigation of the installation reveals a much darker and overtly political intention behind the work's initial glitzy impression.

Many of the spinners feature motifs of handguns, bullets and teardrops, reflecting Cave's deep concern about gun violence in his home country, particularly violence directed at African-Americans.

"We are faced with a history that keeps repeating, one in which gun violence pervades our streets in the hands of both civilians and law enforcement," Cave says. "This abuse of power – and of gun-control laws – leads to far too many eulogies of African-Americans on the news and in our hearts."

Kinetic Spinner Forest is one of six massive works the Missouri-born artist has installed at Carriageworks under the umbrella title Until.

While the title is drawn from the phrase "innocent until proven guilty", enshrined in the UN Universal Declaration of Human Rights, it also has a deliberate ambiguity to it.

"It sort of stops you in your tracks," Cave says. "You're forced to stand still for a minute. Until is not quite a call for action but puts you on hold."

The other works making up Until include Beaded Cliff Wall, 12 monumental handmade curtains made from millions of beads strung by hand onto shoelaces over 18 months by Cave and 12 assistants.

And at the centre of the forest of spinners is Crystal Cloudscape, a five-tonne chandelier-like sculpture made from thousands of crystals and other found objects, many of them emblems of racism in the US.

Making work in a country that has become so deeply divided in the past two years has inevitably had a deep effect on Cave.

But, perhaps surprisingly, he reflects that Donald Trump may have performed the country a perverse kind of service by bringing many simmering tensions to the surface.

"How do we now talk about how we got here?" Cave says. "That's the positive. Let's put it out there and have this conversation. Everybody is still looking for an answer."

And does he remain sanguine about the future for his country?

"Totally! I'm always optimistic. We have to be. Optimism brings us closer to purpose."