The joke’s on us: what happens to comedy post-Trump?

Among those cheering loudest at the (presumed) end of Donald Trump’s presidency in the past week were the comedians — Seth Meyers, Stephen Colbert, Jimmy Kimmel, John Oliver — on America’s staggering array of late-night shows and the-week-that-was wraps. Amid footage of singing, cheering and dancing in the streets, they made no pretence of impartiality, Colbert popping champagne, Oliver sharing a stream of text messages from family and friends saying the same thing: It’s over.

But if this really is the end of Trump, what does it mean for comedy? 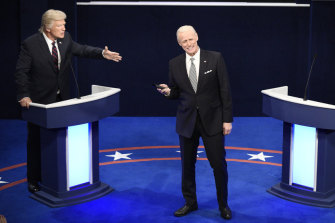 There were more than 3100 jokes about Trump on late-night TV in the US in 2017, according to research by Robert Lichter, a professor at George Mason University in Virginia. By way of comparison, Bill Clinton inspired around 1700 gags in 1998, the year his sex scandal dominated headlines. Lichter and co-author Stephen Farnsworth reported that this year a staggering 97 per cent of all political jokes on late-night TV were Trump-oriented.

It went well beyond the late-night shows. There were podcasts, stand-up routines, Alec Baldwin’s long-running parody on Saturday Night Live, Sacha Baron Cohen’s revival of Borat, Sarah Cooper’s lip-synch shtick on social media and the Netflix special it spawned. So what now?

Cooper, whose Everything’s Fine shows there is far more to her than an ability to mouth the President’s inane pronouncements, addressed the question on Whoopi Goldberg’s The View this week. “People are like, ‘Oh, he’s going to be gone and you’ll be out of a job’. But the thing is, if he’d won then I would have been out of a job,” she said. “These videos wouldn’t be funny anymore. I think they would absolutely have lost their charm if he’d won.”

For many comedians, the charm was long gone anyway. 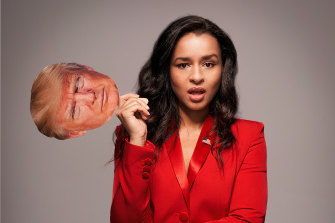 Donald Trump’s words made Sarah Cooper famous, but she has shown she has a fine comedy voice of her own.Credit:Kareem Black/The Times Magazine/News Licensing

“As a human being and a comedian, I cannot wait for this to be over,” John Oliver told The New York Times last month. Rebecca Drysdale, former head writer on The Tonight Show with Jimmy Fallon, last week declared her intent to never write another joke about Trump. “I believe that comedy is a powerful tool. I believe that it can handle anything, no matter how unfunny,” she said. “[But] I don’t believe that making fun of this man, doing impressions of him or making him silly, is a good use of that power. It only adds to his.”

Comedians have always worked in the belief that satire is a powerful weapon, notes local writer and stand-up Sami Shah, “but when reality is such a farce then what do you do? It’s so hard to parody someone who does such ridiculous things — you’re always playing catch-up.”

Shah cites the defiant press conference by Trump's lawyer Rudy Giuliani last weekend, staged — because of a booking SNAFU, many suspected — in the parking lot of Four Seasons Total Landscaping in Philadelphia as almost a perfect summation of this dilemma. “If that was on Veep,” he observes, “you’d say it was too much, it was on the nose.”

Broadcaster and comedian Alice Fraser agrees. “At its best satire is a razor, not a bludgeon. It’s very difficult to think of original, insightful things to say about him.” 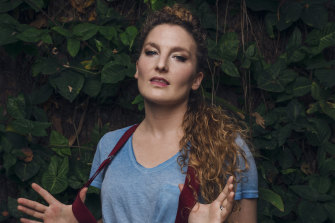 Alice Fraser: ‘I’m fine with writing a Trump joke once week, I just don’t want to have to write one every day.’Credit:James Brickwood

As a contributor to the podcasts The Bugle and The Last Post and to BBC Radio’s The News Quiz, Sydney-based Fraser can’t avoid Trump, though she’d like to. “I’m fine with writing a Trump joke once a week, I just don’t want to have to write one every day. I once wrote, ‘I wouldn’t take an IOU from Trump if he wrote it on the money he owed me’. It was nice, once. But what do you do next?”

Shaun Micallef says the writing team on Mad As Hell soon realised the limits of Trump as a subject. “We tried to do stuff about him like everyone else in the world, but the jokes ended up being the same as everyone else was doing: hair, voice, solipsism, ignorance and vainglory. He quickly grew wearisome as a topic. He wore everybody out.”

Charlie Pickering is a little more ambivalent, believing that a “malevolent presence” such as Trump can be good for comedy because it provides “something … big and worth fighting”.

At the same time, though, the host of The Weekly concedes Trump resisted that to a significant degree because he did not play by the normal rules. “He reversed the polarity of comedy, particularly satirical and political comedy. You would normally take a politician’s serious proposition and extrapolate out the ridiculous. But Trump would start with the ridiculous, so as a comedian you’d have to work backwards to the serious implications of that.” 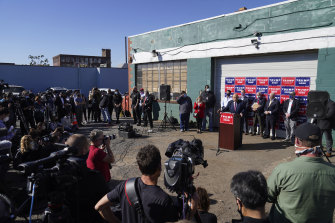 Beyond parody: The Trump administration’s bizarre ‘Four Seasons’ press conference in the car park of a landscaping company in industrial Philadelphia.Credit:AP

Indeed, Trump’s entire tenure in the White House could be viewed as a performance in what writer Dan Brooks identifies as “ambiguous irony”, a mode of address in which the seriousness or otherwise of what he says is constantly up for interpretation, misinterpretation and revision.

“Trump has effectively neutralised political comedy by shifting the place where jokes happen from the soundstage to the White House,” writes Brooks.

Chas Licciardello, co-host of Planet America on the ABC, agrees with that analysis. “Trump takes himself super-seriously as a human being, but I think he is often gently taking the piss out of a lot of things – the office, the press. His own comic abilities do make it hard to take the piss out of him.”

Life after Trump offers the possibility of a return to something like the normal rules of the game, in which a politician says something with apparent sincerity and the comedian pulls it apart.

We got a glimpse of that on Saturday Night Live last weekend when Jim Carrey appeared as Joe Biden and Maya Rudolph as Kamala Harris (with the obligatory, and perhaps valedictory, appearance of Alec Baldwin’s Trump, sitting at a piano to play a downbeat version of Macho Man).

“Sure it took forever,” Carrey/Biden said, parodying Biden’s victory speech. “We kept edging closer and closer. It was like having sex with Sting. But what a release, man. I’ve never felt so alive – which is ironic, because I’m not that alive.”

Over on Jimmy Kimmel Live, they played a slowed-down version of Harris’ phone call to Biden, her “we won Joe” made to sound like the slurring of a drunk. Almost apologetically, the host said: “Trump may be going, but we still have a show to do, you know.”

Of course, Trump may not be going, even if his desperate legal challenges all come to nothing.

“He will continue to be a wellspring of material for generations of comedians, even if he eventually leaves the White House,” says Micallef. “How funny that material will be is an open question.” 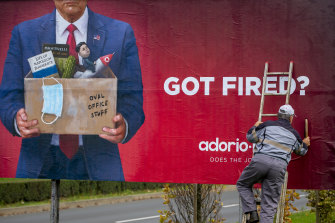 A billboard in Croatia on Saturday.Credit:AP

“If Biden gets in, things do go back to normal to a degree,” says Shah. “It’s politics as usual, and jokes as usual. But Trump isn’t going away, he’s the representative of the new GOP. This is just part of the narrative now.”

For Licciardello, we’re nowhere near the post-Trump age because, for better or worse, he is one of the few things we all share.

“The real strength of Trump for comedy is not how ridiculous he is, but the fact we are living in an era where there are very few common frames of reference — people don’t observe the same popular culture anymore.

“But with Trump, everyone knows every story, he’s almost the only universal reference point. He’s made the entire world his show.”