Neil Young and I go back a ways. For half a century we’ve been walking down a one-way street. He’s been on one side, and I’ve been on the other. He’s never known I’ve been there, and that’s fine.

At the start, he’d release an album to the breeze and I’d scoop it up with my hands and tuck it under my arms, and on we walked. I’d take it on trust. 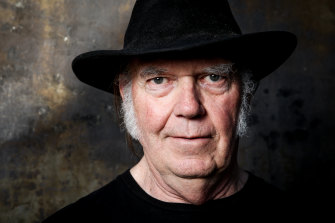 Neil Young: single-minded, guided only by his muse.Credit:Invision/AP

This year (2022) marks the 50th anniversary of Harvest, the record that catapulted Young into the orbit of stardom. It was the first of his albums that landed on the McFadyen record player.

I was drawn to it through the tiny speakers in the transistor sending forth a keening, high Canadian voice looking for a heart of gold. The single Heart of Gold was everywhere. I was 14 and just stepping into the oceanic whirl of rock music. Neil Young became the moon to my tide. I scraped the money together (about $5.95) and bought the album and found, like a revelation, that there were other songs on it, such as Old Man and The Needle and the Damage Done, that were just as good.

If I had been less of a musical snob at 14, I now sigh, I might have bought singles, and if I had I might have owned the hidden gem that was Sugar Mountain. It had been the B side for a few singles, but also Heart of Gold.

One afternoon in 1972, I heard a sliver of notes and a plaintive voice from a jukebox as I walked past a milkbar on the way to the train station from Newcastle Beach. The sound was beguiling. It was Sugar Mountain. I stopped and listened. I missed the train.

Joni Mitchell wrote The Circle Game in response to it and it wouldn’t appear on an album until Young’s triple Decade in 1977.

Harvest propelled Young into the stratosphere of fame, multi-platinum sales accrued around the globe.

And then came the ditch. I went along for the ride. I loved it down there. As they came out, I bought them: Time Fades Away (1973), On the Beach (1974), Tonight’s the Night (1975) and Zuma (1975). There was also the ramshackle and very odd double album soundtrack Journey Through the Past. It brought together Harvest out-takes, Buffalo Springfield songs, a 15-minute version of Words, Handel’s Messiah and the Beach Boys’ Let’s Go Away for a While.

Even in the sunshine of the tunes there were shadows. It was anti-pop. It was the truth of the artist made real.

Being in the ditch was like entering terrain both desolate and life-affirming. Even in the sunshine of the tunes there were shadows. It was anti-pop. It was the truth of the artist made real. And it felt real to this teenager. So real, I almost hesitate to write, that I had a poster of the man on the wall of the rumpus room, all fringe jacket and a necklace of beads. He was looking straight ahead, which was his mindset really. Single-minded, guided only by his muse.

His guide, however, often takes him down roads that truly stretch the faithful.

If you love someone artistically, set them free, as Sting may have sung. After Harvest, I went backwards to his first three solo albums Neil Young, Everybody Knows This Is Nowhere and After the Goldrush. By the time the 1980s came around I was no longer a teenager and to my amazement I was willing to take a fork in the road. I found I didn’t necessarily have to buy every album to wake up in the morning. And it didn’t bother me.

Re-Ac-Tor, Trans and Everybody’s Rockin’ are not on the shelf. Are You Passionate, Psychedelic Pill, A Letter Home and Weld/Arc are, but merely gather dust. Living with War is there, too, but really purely for political reasons. Certainly not for the playing of brass against electric guitar. But then writing this maybe I’ve just had another revelation. Top brass, war . . . Maybe that was part of the whole. At the time, it just sounded discordant, and then maybe that also was the point.

All this internal conjecture goes to show why I love the man. It’s because the man is the music and the music is the man. In an industry of artifice, you know with Young that even though you might hate one project or period, it doesn’t negate the artistic integrity of that work. It’s just that not every note is for you.

Last year, Young clocked up his 41st studio album with Barn. It was recorded in a barn with the one musical constant in his career, the band Crazy Horse. So was part of Harvest. It also has echoes in the first bars of the opener Song of the Seasons with the harmonica on Out on the Weekend from Harvest.

This isn’t to say there’s any circularity to Young’s oeuvre. He’s ploughed so many fields over his 60 years in the business that whatever the next crop of songs, it should equally bring no surprises.

And now 50 years after Harvest, Young has been back in the barn with his old friends. His voice is now time-worn, the playing crosses from meander to menace. The songs a wisp in the air, a lightning strike, a walk round the ranch. Our roads will converge again, as they did with the album Colorado.

A few years ago, I asked Melbourne singer-songwriter Rebecca Barnard her views on Harvest. She said, in part: “I first heard Harvest in 1974. I was 14. Something was different and magical about this album and I remember thinking, ‘If only he had a better voice, I could really love this.’ This was a turning point in my life when I began to love Neil’s singing and realised it’s all about being REAL.”