The Queen shared 2 photos of Prince Charles for his 72nd birthday, and it shows how their relationship has evolved through the years 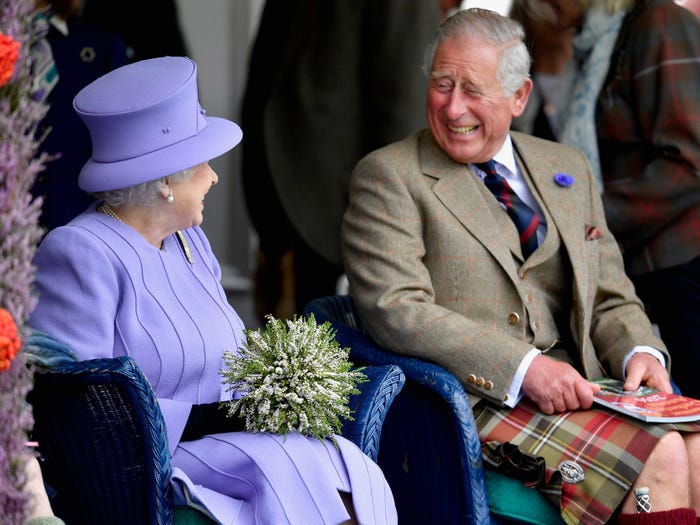 Her Majesty marked the future king's special day by posting two throwback photos on Twitter — a formal photo of Charles as a baby, and another of mother and son laughing together at the Braemar Gathering in 2016.

"Wishing The Prince of Wales a very happy birthday today!" the caption read, alongside a balloon and cake emoji.

It isn't clear where the first photo was taken. It was likely to have been released at around the same time as the below photo, taken by Stirling Henry Nahum, shortly after the prince's birth in 1948.

The difference between the two photos — a formal, posed picture alongside an unaffected shot — could be seen as a reflection on how the Queen and Charles' relationship has evolved through the years.

The Prince of Wales had a complicated relationship with his mother as a child, say reports. Much of his early life was spent being cared for by nursery staff, according to BBC News and royal biographer Jonathan Dimbleby.

"Just like his mother before him, much of Charles' early life was in the care of nursery staff," BBC News reports. "When he was little over a year old, his mother and father lived without him in Malta as Prince Philip was stationed there."

"[Queen Elizabeth] loved her first and second born but in the early years of her reign focused on her duty as a sovereign to the exclusion of much else," Catherine Meyer wrote in the biography, "Charles: the Heart of a King," according to Elle.

Charles spent an increasing amount of time away from his parents after he was sent to Gordonstoun, a private boarding school in a remote part of Scotland, aged 13.

While it's impossible to predict the state of the Queen and Charles' current relationship, it appears that things have improved since then.

The pair have continuously been photographed laughing together at royal events, and these have become more common than formal photographs.

For example, this picture of the monarch and Charles at the Highland Games in 2010 shows Her Majesty place an affectionate hand on her son's arm as they appear to share a private joke.

The Prince of Wales celebrated his relationship with his mother on Mother's Day earlier this year, posting a childhood photo on Instagram of himself with the then-Princess Elizabeth in 1950.

"Wishing everyone a Happy Mother's Day, particularly in a year when families may not be able to be together," a spokesperson for the prince wrote. "A young Prince Charles plays in the Clarence House garden with his mother, Princess Elizabeth, in 1950."