If there’s anything most people can ever agree on in this life it’s that gravity is real, this government shutdown is really sad, and the cast of Queer Eye knows how to keep people entertained. The Fab Five are set to appear on Lip Sync Battle (finally), and gave fans a look at what went down during the taping with an Instagram post shared on Saturday, Jan. 12. Needless to say, the photos are absolutely everything, especially the Queer Eye cast’s Lip Sync Battle Beyoncé-inspired costumes.

On Saturday afternoon, Jonathan Van Ness shared a photo of himself and his cast members, including Bobby Berk, Tan France, Karamo Brown, and Antoni Porowski, posing on the set of Lip Sync Battle. In the photo, the group is seen donning similar outfits to that of which the Lemonade singer wore during her historic set at Coachella in 2018: bright yellow cropped hoodies with sparkly lettering, snug blue jean shorts, and iridescent boots with glittery frills. On Jan. 12, Van Ness captioned the photo:

Bey, is that you?

France also shared a behind-the-scenes photo of the group one day earlier on Friday Jan. 11, writing in the caption that the moment was "one of funniest days [he’s] ever experienced!" I can imagine…

Did they nail it or what? Let’s look at Beyoncé’s actual Coachella outfit from April 2018 for comparison: 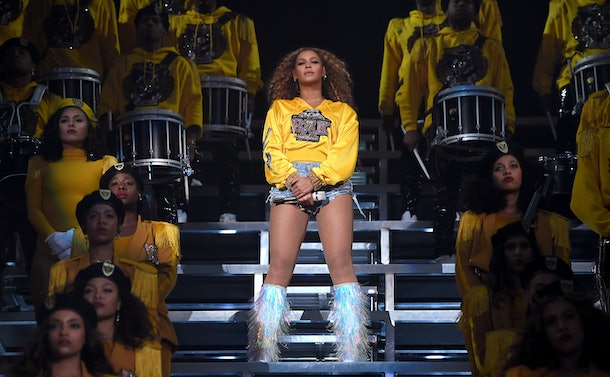 Yeah, they’re totally spot on, if you ask me.

If you somehow missed her performance, it was absolutely legendary. Over the course of two hours, Beyoncé ran through 27 songs, including classic hits like "Crazy In Love" and "Formation," with a 200-person band, per Vulture. Jay-Z popped up and shared a cute moment with his wife on stage, Solange made a surprise appearance and danced alongside her big sis to "Get Me Bodied," and Beyoncé performed with Destiny’s Child for the first time since the 2013 Super Bowl halftime show. And somewhere in between, she seemingly had time to change her nail polish. It was so good that The New York Times wrote that she was bigger than Coachella itself, Pitchfork said the performance was one for the ages, and even a bunch of celebrities fanned out over the moment, from Adele to Sam Smith. Additionally, it made history: It was the first time Coachella had a black woman as a headliner and the showcase broke YouTube streaming records, pulling nearly half a million viewers, according to Refinery29.

Unfortunately, the performance is nowhere to be found, so you can’t watch it again, but you can at least see Queer Eye channel the looks on Lip Sync Battle.

According to France, he, Porowski, and Berk will be going up against Brown and Van Ness — hopefully with some similar dance moves and some of Bey’s tunes. We’ll see. The episode airs on Jan. 17, so set those alarms and be ready.