Shampoo doesn’t typically inspire the same type of nostalgic swooning as, say, a Caboodle or the roll on body glitter one would apply before a middle school dance. There does seem to be one exception, though: Herbal Essences. "The bathroom my sister and I shared throughout high school cycled through a ton of different products," Allison Stadd (31, Brooklyn) tells Bustle, "but Herbal Essences was a constant." The ability of Herbal Essences shampoo to transport a person to an exact time or place is a sentiment echoed by most of the fans interviewed for this piece. The hair care brand often remembered generally for its bold scents and orgasm-adjacent television commercials, also tends to spark specific memories of a time in each person who used the shampoo’s life.

Rachel Zipperian has done beauty product development for Procter & Gamble for 16 years, focusing on Herbal Essences (which moved under P&G’s brand umbrella when the corporation bought Clairol in 2001) for the past seven. "Any time I tell somebody I work on Herbal, they smile," Zipperian says. "Generally, I get to hear a story about either the first time they used Herbal or something about it." Those stories can range from Stadd’s memory of using Herbal Essences shampoo to wash the gel out of her hair after dance team competitions to the 50-year-old woman who told Zipperian she used Herbal Essences because it would hide the smell of weed in her hair.

Hillary Sterling (29, Los Angeles) tells Bustle that "around 1997 – 2000ish" she begged her dad to buy "the same super cool shampoo my teen babysitter used…the pink bottle of Herbal Essence with the green cap top." When her dad finally gave in, Sterling recalls being so obsessed with the smell that she insisted on using it to give her pets — a guinea pig and three rats — a bath, too. "I had the best smelling pets ever!" she says. Ming Foxweldon (27, Seattle) has a more general Herbal association: "It reminds me of my elementary school days because because some of my classmates used it," she tells Bustle. "I makes me happy and brings me back to happier times." 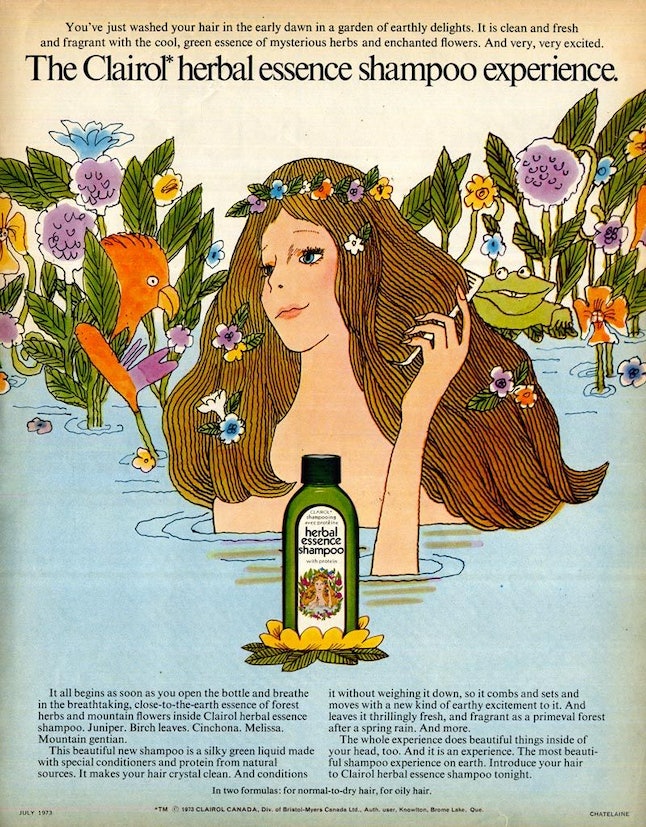 The scents that sparked so many smemories have always been a focus for the brand, which was launched by Clairol in 1971 as a single Herbal Essence shampoo (the plural "Essences" in the name wouldn’t come until the ’90s). Lisa Mulvany, a Beauty & Feminine Care Historian at P&G, recounts the origin story of that first product by reading from a book published by Clairol in 1982 called 50 Colorful Years: The Clairol Story, "[The book] says, ‘The back-to-nature mood of the country has manifested itself in a trend toward natural food, herbal teas, and herbal concoctions for the body and the hair," she reads. "’People have also become more conscious of fragrance than ever before. Clairol’s response was Clairol Herbal Essence shampoo, which distinguished itself with a fragrance blended from the essences of 16 herbs and wildflowers.’"

Mulvany remembers that the fragrance "was just so different than anything else that was on the market." Although the original scent hasn’t been officially for sale since the ’90s, today there are still fans of the original who are hoping it’s not gone for good. In one Facebook group called "Let’s Convince Clairol to Bring Back the Original Herbal Essence Shampoo!" members post links to things they’ve bought that smell similar to how they remember the OG Herbal scent smelling. As one of them puts it "I don’t care about it being shampoo, it’s the scent I’m after."

Zipperian says that shampoo in the green bottle, along with a corresponding creme rinse, remained the only Herbal Essence products until Clairol decided to expand the range in the early ’90s. "The brand was very tired at the time and not doing as well as they wanted, so they wanted to relaunch it," Mulvany explains. So, it added an "s" to the name and released four different varieties of shampoo and conditioner, made for different hair needs. "They wanted people to understand that there are different wildflower essences in this [new] product," Mulvany says. This is also when what is arguably the most iconic Herbal Essences bottle — clear, with a reverse label that could be seen through the shampoo (instead being pasted on the front) and a dark green cap — came onto the scene. "A lot of people that come in [to the P&G archives] go right to that bottle," Mulvany says. 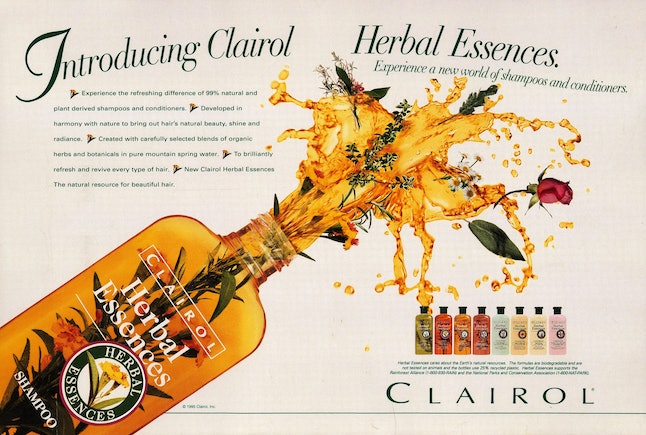 Along with the iconic fragrances, the television ads for the fresh, new version of this shampoo helped ensure Herbal Essences stuck in consumers’ brains. The premise was simple: Woman is doing something mundane — like riding in an elevator or gossiping with a coworker or lifting weights at the gym or looking after a patient who has apparently taken "some sleeping pill" — when suddenly she finds herself lathering up in the shower (or surrounded by MuscleMen™ who are lathering her up). The pleasure caused by the incredible scent of Herbal Essences shampoo makes it impossible for the woman to open her eyes, or to stop moaning and screaming "Yes… yes… yes!!" a la Sally Albright.

"They’re polarizing," Mulvany says when asked about the reaction to the ads. "They certainly get your attention." The commercials were so successful, that P&G kept running versions of them after the company acquired Clairol. "The commercials lasted them until the early 2000s," Zipperian says.

In 2006, Herbal went through another major rebrand. As reporter Elaine Wong wrote for AdWeek, the iconic bottles with the green caps had been replaced by "curvaceous bottles whose colors would give the Pantone color chart a run for its money." This launch was also when the brand introduced the mega-popular Hello Hydration line (its packaging is bright blue), which Zipperian says was another major fragrance moment for the brand. "I remember that was the first coconut scent shampoo to really hit the mass market," she recalls. "When we were testing [the scent] with consumers, there was this belief that everyone thought only sunscreen and suntan lotion could smell like coconut." However, coconut-scented shampoo turned out to be a massive hit — and still is. "If I look at sales data now, coconut still does extremely well," Zipperian says. Search for "herbal essences" on YouTube and "hello hydration" is the first autofill; results include many reviews of the shampoo and conditioner, especially on natural hair.

As for the ads to go with this relaunch, Christopher Keith — who worked in marketing for Herbal Essences at the time — told AdWeek that his team started to focus more on the natural formula, instead of the ~orgasmic experience~ of the shampoo. Using organic ingredients is something the brand continues to prioritize: Its most recent efforts include partnering with London’s Royal Botanic Gardens, Kew (popularly referred to as Kew Gardens) to ensure the plants going into Herbal Essences products are actually the plants they claim to be, and to find new uses for ingredients the brand might not have considered before. "As the demand for plant-based ingredients grows, we get new and more players in the supply chain," Zipperian tells Bustle over email in a separate interview. "There is also very little regulation in place to govern natural ingredients. It was critical for us to ensure the purity and potency of these botanical ingredients."

In addition to cataloging as many types of plants as possible, the scientists at Kew Gardens are able to test samples of ingredients to ensure that, for example, the aloe a brand like Herbal is using for its products is, indeed, aloe. Monique Simmonds, the Deputy Director of Science at Kew Gardens, tells Bustle that counterfeit ingredients are "most likely influenced by poor supply of raw material to extraction suppliers, so that alternative species are used to replace the requested species." In an extreme case, a company might think it just bought a bunch of ginseng, but it really has a bunch of driftwood painted to look like ginseng. Generally, Simmonds says, any type of counterfeit is most likely to happen when the demand for a product is much higher than growers are physically able to produce or when poor storage leads to a loss of the actives an ingredient has. "For example, there is more licorice being used in products (food, drinks, health products) than there is being grown," Simmonds says. Aloe, on the other hand, is "prone to fermentation if not stored correctly." (Simmonds says they’ve tested the aloe used in the Herbal Essences bio:renew line to ensure that hasn’t happened.)

Along with making sure the products don’t contain any counterfeit ingredients, Herbal wants to ensure the ingredients are actually beneficial in some way. "In my experience, we’ve found very few toxic counterfeits being used for cosmetics," Simmonds explains. "The main issue with cosmetics is that the extracts being supplied could be considered ‘not fit for purpose’ — that is, if they are supposed to have some functional activity [but don’t]." 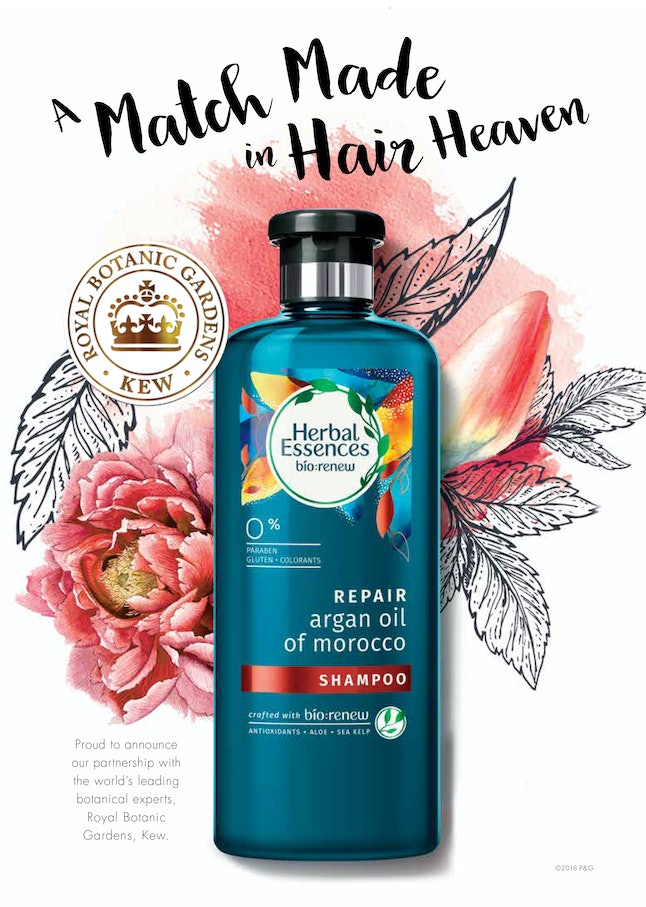 As the brand moves forward creating more and more fragrances — when asked what sort of scents consumers can expect in the future, Zipperian teases with "we’re really starting to do a deep look into herbs" — it celebrates the nostalgia many of its fans have for the original products. In 2013, Herbal Essences relaunched two classic scents, the Smooth Collection and the Shine Collection, in the original bottles but with an updated sulfate- and silicone-free formula. And Zipperian says it would surprise her if more classic scents don’t come back soon.

After all, it’s hard for the brand to ignore the continued popularity of that original 1970s fragrance, with some old bottles of the stuff going for up to $100 on eBay. For fans looking to get their hands on a genuine original, Mulvany has a tip: "On the earliest bottles, the claim was ‘natural protein.’" If the bottle doesn’t say that, it’s not an actual, 1971 original, but probably something from later on in the decade. Either way, "nobody should be using products that are 50 years old," Zipperian insists. Chances are, that original scent you’re after may come with an unwanted side of funkiness, too.