Hey now, hey nowwww! This is what ’90s kids’ dreamsssss are made of! Miley Cyrus is in full Disney mode right now. A week after she cut and colored her hair to look like Hannah Montana’s iconic blonde wig, the former Disney darling is now busy posting videos of her singing throwback Disney Channel tunes while wearing a Mickey Mouse T-shirt. Trust, the videos of Miley Cyrus singing Hilary Duff and High School Musical truly are the best of both worlds.

The first video Cyrus posted showed her singing along to Duff’s "So Yesterday." An iconic bop. Don’t we know that Miley’s just a bird that’s already flown away?!

The next song was "Breaking Free," iconically sung by Zac Efron (well, Drew Sealy) and Vanessa Hudgens. "This shaped a f*cking generation," Cyrus tweeted along with the video.

There’s not a star in heaven that we can’t reach… now that Miley has posted these videos!!

The next video was "Stick To The Status Quo." She tagged Ashley Tisdale, Vanessa Hudgens, and Zac Efron in the video (also adding "#NoQuo") and said, "I’m glad in 2019 we’re challenging this garbage."

Miley stans are gagged by these videos.

Cyrus really has been laying the Disney nostalgia on thick lately.

The singer recently changed her hair to look like Hannah Montana’s. It was everything.

She also went on a Hannah Montana posting spree to celebrate the 13th anniversary of the series premiere of the show that made her famous.

Allow me to bless you with these Instagram stories. 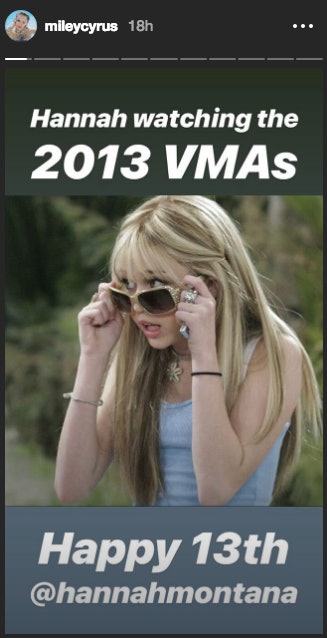 "Hannah watching the 2013 VMAs. Happy 13th @hannahmontana," Cyrus wrote in the first post, hilariously referencing her infamous 2013 VMAs performance during which she twerked on Robin Thicke. (That sentence never gets less painful to type. Not because of Cyrus twerking. It’s because of Robin Thicke. Exit stage left with your blurred lines, Robin!!) 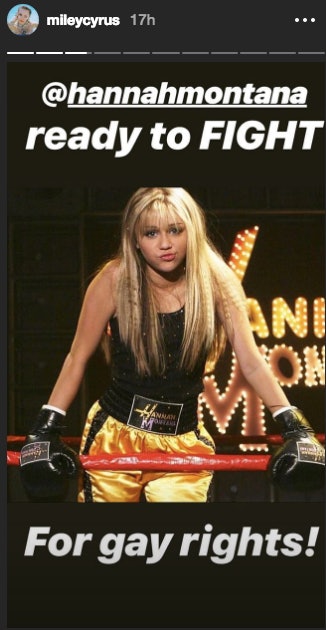 "@hannahmontana ready to FIGHT For gay rights!" Cyrus said in one of the posts. The photo showed her in her boxing outfit from the "I Got Nerve" music video.

Then she gave us NSFW Hannah by implying some hella sexual things from this picture from the series premiere. 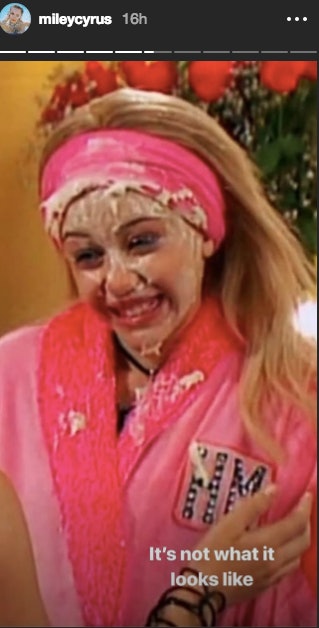 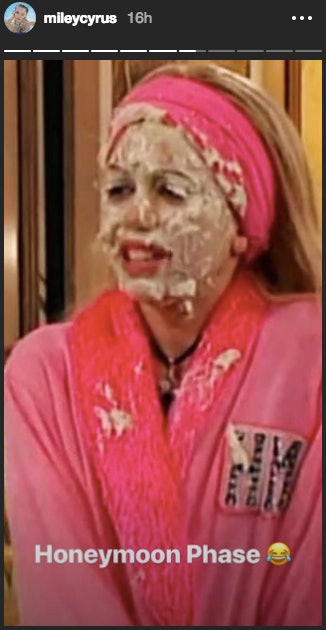 "It’s not what it looks like," she said in the caption of the first photo, which showed her with white pie all over her face.

The next photo showed a similar white pie-covered face and said, "Honeymoon Phase." You hear that? That’s the sound of Billy Ray Cyrus doing a spit take as Liam Hemsworth giggles internally.

Suffice it to say that Miley Cyrus is feeling hella nostalgic this week. Now, please give us the Hannah Montana/Lizzie McGuire crossover/reboot event you know we deserve. K thx, byeeeeee!