It was probably too much to hope that 2019 would start with a blessed reprieve from the petulant whine generated by aggrieved white male privilege, but here we are.

Thanks, Louis C.K. (the "oc" is silent.) As Anna Sillman wrote in The Cut this week, “Right on cue, Louis C.K. is back on stage, after taking a 'long time' to 'listen'. Not to listen to the women he hurt, of course, but to the angry little voice inside of him, that furious, tiny masturbator on his shoulder, whispering in his ear: Aren’t you, Louis C.K., really the biggest victim in all of this?” 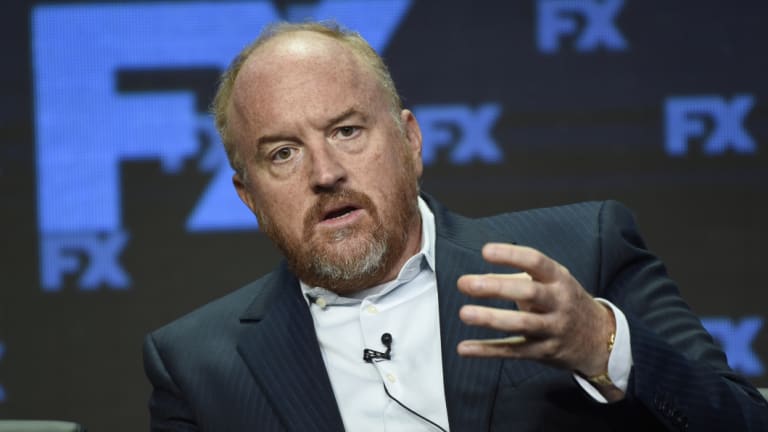 In case you need a refresher, in late 2017 C.K. was finally forced to admit to longstanding rumours that he had sexually harassed and exposed himself to numerous women in his industry. Some of them were colleagues, some of them colleague-adjacent. All had significantly less power than him.

After years of treating the allegations as spurious lies that were beneath him to even acknowledge, C.K. issued an “apology” that was only eclipsed in its self-aggrandisement by the astonishing fact it didn't include a single use of the word "sorry". Still, he vowed to go away and take a “long time to listen”.

In my book, Boys Will Be Boys, I predicted C.K.’s exile would be short-lived and indeed it was. Less than a year had passed before he returned to the stage, aided and abetted by industry colleagues who, like all those who support the smooth transition of predatory men back into the spaces they once held court in, confuse momentary recompense and consequences with "being forced to suffer forever".

This obsession with undue suffering is exactly what C.K.’s latest foray into the media spin cycle has revealed about his new comedy preoccupations. Leaked audio from a recent show lasting almost an hour laden with racism, ableism, transphobia and the good old-fashioned outrage of a white man who can't take responsibility for his actions.

The set showcased "jokes" about those wacky gender non-binary kids and the "political correctness" they try to force people to endure (which is not quite like being trapped in a room with a man and his exposed, erect penis but apparently just as bad if not worse).

There was the commentary on the Parkland shooting victims, who shouldn't think they're interesting just because they got shot. There was the repulsive "humour" about Asian men and black men and the respective size of their penises. There were the predictable complaints about how everything's been taken away from him (he had a bad year, you guys), and how a man who’s lost everything can't be punished further. Also, everyone's mother is a whore.

I'm not offended by the idea that any of these topics could be fodder for comedy. But they have to be done well, by the right people, and without the laugh relying on the kind of lazy punch down that all too many comedians reach for because they're actually far less skilled at their jobs than they think they are.

It’s hardly clever or revolutionary to wisecrack about how you insist on still using the word "retarded". Wow, you think you're reinventing the comedy wheel with that one? You're moonwalking on the edge of the cliffs of decency, shocking people with just how unbelievably risky you're willing to be? Mate, the only way you could get more middle of the road would be if you managed to crawl under the painted highway divider.

But what a surprise, the same people who repeatedly insist that audiences "harden up" and accept comedy as some kind of Vangelis-scored Thunderdome in which only the most resilient of edgelords should dare to enter are also unable to accept critique of their pedestrian bullshit. COMEDY IS SACRED! IF YOU DON'T LIKE IT, DON'T LISTEN! GEORGE CARLIN!

Truly, there is no one more entitled, insecure and fragile than your average male comic. C.K. managed to hide his utterly banal core behind the exact politics he's now deriding, but it was all an illusion. As it turns out, all it took for him to be revealed as the predictable hack he is was being asked to accept responsibility for his grotesque, perverted behaviour and just step out of the spotlight for more than a minute.

As Sillman writes, “Even after a year of so-called reckoning, there is clearly an audience clamoring for comics to deride PC culture and the 'excesses' of #MeToo, and what C.K.’s set shows is how ready he was to take the path of least resistance. It’s so much easier to be prideful and bitter, and cater to that audience than to try and actually become a better, smarter, more empathetic comic.”

In a recent speech, the genuinely clever and evolving comedian Hannah Gadsby spoke of "the line in the sand" that separates good men from bad men, but that all men reserve the right to be in control of. The force with which some people (most of them men) continue to defend C.K. ultimately speaks to the fury these same people feel at having control of that line taken away from them.

Because if the PC police and its feminazi banshees can come for someone as powerful as C.K. and succeed, what chance do they have?