Cat lovers, rejoice! If you’ve ever spent a Marvel movie wishing that your favorite superheroes had a cuddly companion, your wish is about to come true. Captain Marvel introduces Goose the cat when it comes to theaters Mar. 8. Yes, like in the recent comics, Carol Danvers hangs out with an adorable pet. But Goose and his comics counterpart Chewie aren’t your typical felines. The Captain Marvel cutie is actually of an alien race called Flerken — who just happen to resemble Earth cats.

So while Goose definitely looks like a cat, her biological traits aren’t feline. In the comics, Flerken can lay up to 117 eggs and have tentacles that come out from their mouths. They also contain pocket dimensions. That means that they have spaces within their bodies that can keep items stored. Who needs to carry a bag when you have Goose! Plus, those pocket dimensions can also be used for transportation, but the process is pretty gross and messy.

If you hadn’t heard of Flerken before the Captain Marvel movie, you’re not alone. Flerken weren’t introduced until 2014. Chewie first appeared in Captain Marvel Vol. 8 #7-8. In the first part, Rocket, from Guardians of the Galaxy, sees the cat and thinks she’s a dangerous Flerken, then tries to kill her. But Captain Marvel has no idea her pet isn’t actually a cat, so she denies it. In a twist, it turns out that Rocket was right. Chewie is exposed as a Flerken once they find dozens of her eggs. 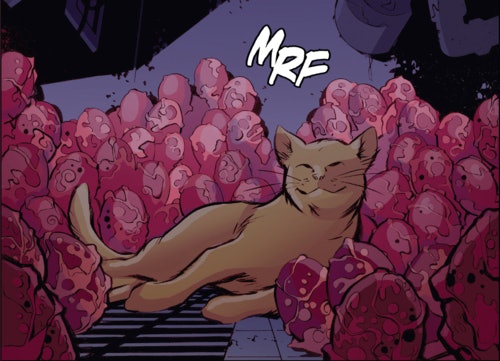 In the second part, she does everything possible to protect her babies from Rocket in the spaceship, but they’re both quickly under attack. Instead of becoming enemies, they form an alliance, and Rocket becomes so impressed with Chewie’s abilities. 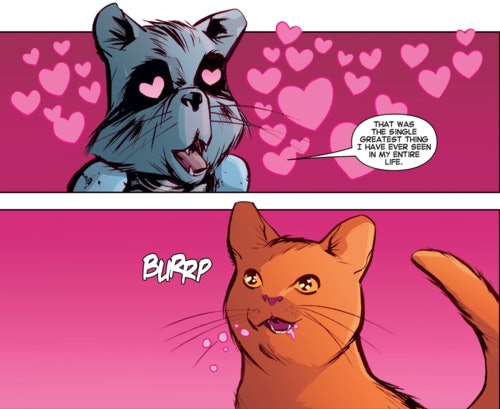 Having a cute, fluffy co-star had its downsides for Captain Marvel star Brie Larson, however. In an interview with USA Today, the actor shared that her allergies became a big challenge while filming. “It was like the joke on set because I could do really crazy things stunt-wise, but the cat was a big obstacle for me,” said Larson. “It’s weird how you can train and get your body to do insane things, but allergies are kind of a hard stop. That’s where your body’s like, ‘That’s it.’”

But co-director Anna Boden shared with the outlet that the cute Flerken actually forms an incredible bond with Nick Fury (Samuel L. Jackson). "Captain Marvel is really more about a love story between Goose and Nick Fury than it is a love story between her and Goose,” said Boden. “Sam had to do a lot more of the getting really into the cat love there."

Luckily, Jackson had a far more positive experience working with the multiple cats who played Goose. During a recent appearance on Jimmy Kimmel Live!, the actor revealed which one was his favorite. "Reggie was cool!" he told Kimmel. "There were also three others — each of them had specific tasks that they were supposed to be good at, but Reggie was the jack of all trades. He could do everything, and he got used to me snacking him. They just give you stuff, and then you give him a snack and talk gently to him… next thing you know you’re like best friends."