A “staggering number” of migrant children detained at a Border Patrol facility in south Texas face overcrowded conditions, with some held for as long as seven days, lawyers who interviewed them on Thursday told CBS News.

Neha Desai, a lawyer representing migrant youth in U.S. government custody, said she interviewed children who said they were hungry, as well as minors who only showered once in seven days.

“Some of the boys said that conditions were so overcrowded that they had to take turns sleeping on the floor,” Desai added, citing interviews with nearly a dozen unaccompanied migrant children held at the Customs and Border Protection (CBP) holding facility in Donna, Texas.

On March 2, the Donna complex was holding more than 1,800 people — 729% of its pandemic-era capacity, which is designed for 250 migrants, according to an internal CBP document reviewed by CBS News.

Most of the minors said they had only showered once while in U.S. custody, even though they’d been held for more than five days, according to Desai. Some said they had showered twice.

“They all said they wanted to shower more and were told they couldn’t,” Desai said. 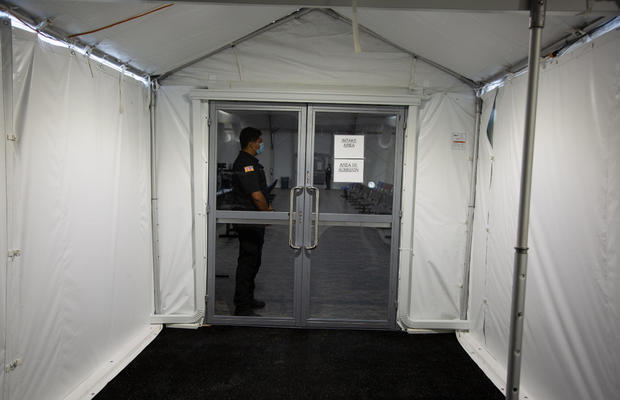 As lawyers representing migrant children in the federal court cases over the landmark Flores Settlement Agreement, Desai and her colleagues at the National Center for Youth Law are entitled to interview minors in U.S. immigration custody.

Desai said she and one of her colleagues were only able to interview some of the hundreds of migrant children detained at the Donna facility, a large tent complex designed to detain unaccompanied minors and families with children for short periods of time. The lawyers said CBP denied them a tour of the facility.

The Donna facility, which opened last month, has been operating over its pandemic-era capacity for weeks, CBP acknowledged in a recent filing in federal court. The facility was holding 854 children on February 21 and nearly 700 two days before, according to the court filing, which also noted that social distancing “could not be observed at all times given the increasing numbers of individuals in custody.”

The children interviewed included a young teenager in U.S. custody with her baby and an 8-year-old unaccompanied girl. Some of the children who traveled with older siblings were even younger, Desai said.

“There was a staggering amount of very young children,” she said.

Many of the children were visibly emotional, Desai said, especially siblings of different genders who had been separated and placed in distinct sections of the Donna facility. The young detainees, Desai said, also reported not having access to outside activities. She said the children told her “about how they never saw the sun.”

“One of them shared that he could only see the sun when he showered, because you can see the sun through the window,” Desai said, noting the children raised this issue during their interviews outside the CBP facility.

The minors Desai spoke to also said they had been denied phone calls to communicate with family members. “They were hysterically crying, wanting to talk to their family,” she said.

“We appreciate the extraordinary challenge that the government faces in undoing the damage of the prior administration’s immigration policies,” Desai said. “That said, it is deeply concerning to see young children in facilities for days on end, unable to take a shower, call their families or see the sunlight.”

Representatives for the Department of Homeland Security and CBP did not respond to requests to comment on Desai’s findings. 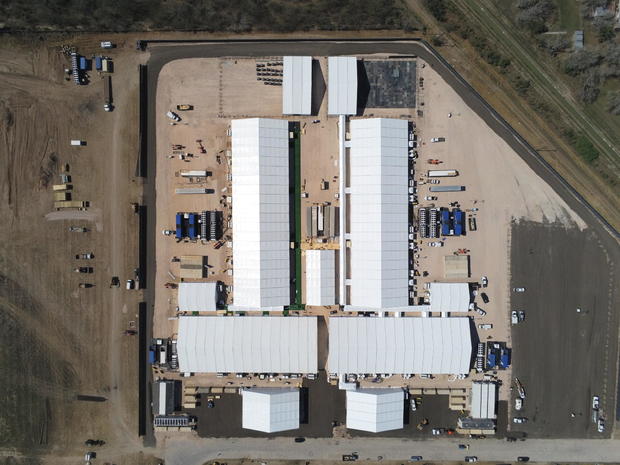 During a call with reporters Wednesday, acting CBP commissioner Troy Miller said his agency was “struggling” with the number of migrant families and children in its custody. But he said CBP was offering children access to medical contractors, welfare checks, blankets, baby formula, hot meals and showers at least every 48 hours.

“Many of us, maybe most of us, are parents,” Miller said. “I myself have a 6-year-old, and these Border Patrol agents go above and beyond every single day to take care of the children.”

In an interview with Univision’s Jorge Ramos, Homeland Security Secretary Alejandro Mayorkas said he saw “too may children” when he visited the Donna facility earlier this month. But he applauded Border Patrol agents for their “heroism,” saying the children were well taken care of.

“There are no children in cages in the United States,” Mayorkas said, according to a transcript of the interview.

A sharp increase in the number of unaccompanied minors entering U.S. custody along the southern border has severely strained the government’s capacity to process them, creating significant humanitarian and logistical challenges for the Biden administration.

Nearly 9,500 unaccompanied children were taken into U.S. border custody in February — a 21-month high, according to government data.

According to government figures obtained by CBS News, more than 7,000 of these minors were transferred to shelters overseen by the Office of Refugee Resettlement, which is responsible for housing them until a sponsor, typically a family member in the U.S., is located.

With nearly 9,000 children currently in custody, the refugee agency is scrambling to expand its bed space, which had been limited by social distancing measures. To accommodate more children, the Centers for Disease Control and Prevention (CDC) relaxed those restrictions last week, citing “extraordinary circumstances.”

The lack of bed space and upward trend of unaccompanied minors entering U.S. custody has led to a logjam of migrant minors in Border Patrol facilities, most of which were built to briefly detain adult men.

As of earlier this week, more than 3,200 unaccompanied children were stuck in Border Patrol facilities, according to CBP documents obtained by CBS News. Nearly 1,400 of the children had been held beyond 72 hours, the legal limit border officials have to turn over unaccompanied minors to the refugee office.

Desai said the children she interviewed on Thursday echoed one similar sentiment about their time in Border Patrol custody.

“Multiple kids said the exact same sentence: ‘the only time I get up is to throw away trash or go to the bathroom,'” she said.