Caldron spells and magic aren’t the only things brewing for Sabrina Spellman. After 11 episodes spent coming into her powers and dealing with the consequences of embracing her half-witch side, Sabrina (Kiernan Shipka) made at least one definitive decision: she signed her name over the the Dark Lord and is now a full-fledged witch. However, her love life isn’t so certain, and it looks like it’s going to take center stage when Season 1 resumes this year. These new photos from Chilling Adventures of Sabrina Season 1 Part 2 tease the love triangle that’s been brewing since the beginning of the series.

As hinted at throughout the first half of Season 1, Sabrina has a choice to make between Harvey and Nicholas. According to the official synopsis for Part 2 of the season, which was included in a press release obtained by Bustle, the love triangle will be at the center of this next batch of episodes. "Romantically, Sabrina is caught in an unholy love triangle between sexy warlock Nicholas Scratch and salt-of-the-Earth mortal Harvey Kinkle," it reads. And if it’s anything like her last decision-making process, it’s not going to be a smooth one.

Interestingly, this new choice reflects the main conflict of the earlier episodes between light and dark. Only this time, instead of choosing what kind of witch she’ll be, Sabrina must choose what kind of man she wants by her side: her long-time mortal boyfriend, or the mysterious and handsome warlock from the Academy of the Unseen Arts.

The new photos from Season 1 Part 2 show the teenage witch getting really, really cozy with both Harvey Kinkel (Ross Lynch) and Nicholas Scratch (Gavin Leatherwood), so it’s hard to tell who she’ll choose. 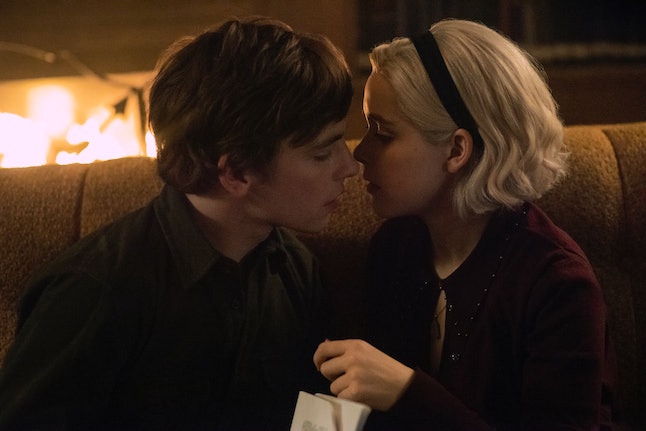 Released Monday, March 4, the new photos, include a shot of Sabrina and Harvey on a couch in front of a fire. They’re seemingly pre-kiss, which is a lot closer than they’ve been since she revealed to him that she was a witch. It looks like it could be the same couch that’s in the library at their school, but all their houses have fireplaces so it can be anywhere, really.

Last viewers saw of their story, Harvey returned enchanted colored-pencils Sabrina had given him after she gave his dad magic eggnog to make him stop drinking, telling her to never use magic on his family again. He doesn’t want anything to do with magic, so they’re left at an impasse. But, they still love each other, and perhaps things will be getting better in Part 2, seeing as how they’re so close to kissing in the newly released photo. 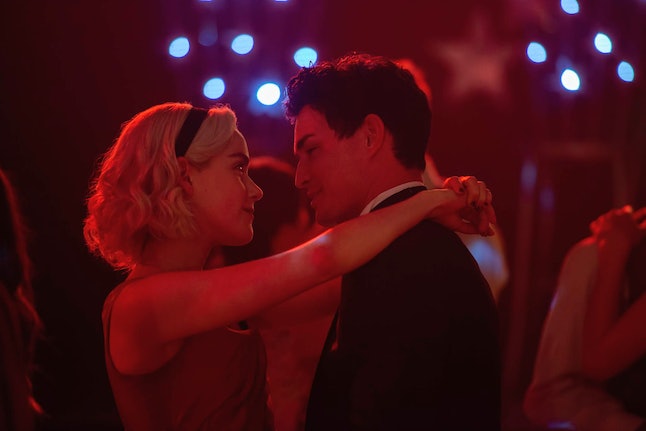 Another photo showed Sabrina getting close to Nicholas, which is on track with the press release that teased that the witch would be "exploring her darker side, curious to learn more about her heritage." Of course this conflicts with her mortal friends, but it will also no doubt push her closer to Nicholas. He’s had his eye on her since he first saw her in Part 1, and has come close to wooing her. But her allegiance to Harvey has kept them as just friends. At least, up until now.

Sabrina has leaned on Nick before, to help protect Harvey and also to help with spells. He’s also sometimes a voice of reason. And, seeing as how Sabrina signed her name in the Book of the Beast, she and Nick have a ton more in common now than she and Harvey do. Based on the new photo, which shows them dancing in formal wear (could it be a school dance?), it definitely looks like they’re getting closer, and he might be gaining her trust, too. No word on where they are or if he’s her official date to whatever it is. But the teaser trailer also shows them dancing rather intimately as well. Sabrina is getting darker, and so might her romantic interests.

The synopsis also revealed that there are more than just the usual demons and evil magic wreaking havoc on the Spellmans and Greendale. It said, "Everything is in question…relationships, identity, true intentions…when the devil’s work is at hand." Maybe Satan himself is pushing Sabrina more towards Nick, or doing something else nefarious that’ll ruin any chance at a love life with either boys. Whatever the case, Sabrina has a lot to figure out in Part 2, and viewers will be in for an intense conclusion to the first season.