Things You Forgot About S Club 7’s TV Show, Including Their Baffling Love Of Bucket Hats

All millennials who avidly watched Fox Family (later ABC Family, and now Freeform) know there ain’t no party like an S Club party. But how much do you really remember about that lovable British pop group’s TV show? In the decade-plus since they left the air, there are probably a lot of facts you forgot about S Club 7. With the news that the early-aughts band decided to make a comeback as S Club 3 (don’t say you "Never Had a Dream Come True"), it’s time to revisit the turn of the 21st century fashions, the silly antics, and the relationship arcs that made the sitcom the band starred on important viewing when you were a kid.

As you probably recall, the series started with the British group’s members — Tina Barrett, Paul Cattermole, Rachel Stevens, Jo O’Meara, Hannah Spearritt, Bradley McIntosh, and Jon Lee — living and working in Miami. Each of the singers plays a fictionalized, heightened version of themselves à la the Spice Girls in Spice World. (It should be noted that the creator of S Club, Simon Fuller, used to manage the Spice Girls). They moved to the U.S. to pursue their music career ambitions, but, in the early episodes, they mostly spent their time being confused by American culture and completing menial tasks for the hotel owner. It was a grand old time, even when they packed up their bags and left for Los Angeles where their kooky adventures continued.

Here are a few things you probably forgot from the sitcom.

1. All Their Ridiculous Jobs

Sure, in S Club in Miami, they were all working in a hotel, but by the time they went out west, in nearly every episode a different character (or some combo of the lot of them) was getting a new job. In the 13 episodes of the second season of S Club 7 in L.A., characters got jobs as camp counselors, house sitters, a tour guide, an aerobic instructor, a DJ on a classical music station, and a nude model. Why couldn’t any of them hold down a job?

2. All The Crop Tops & Baggy Pants

It’s obvious that they love crop tops, but really, all four of the women showing off their belly buttons? It was practically a uniform for them.

3. They Also Had A Weird Thing For Hats

Hannah’s love for bucket hats was undeniable. She gets excited just looking at somebody else wearing a bucket hat.

Rachel basically had the "The Rachel Cut" (as popularized by Jennifer Aniston’s hair in Friends) for tweens. Sure, it’s just long layers (the look all the other women shared), but her silky, smooth strands seemed straight out of a shampoo commercial. 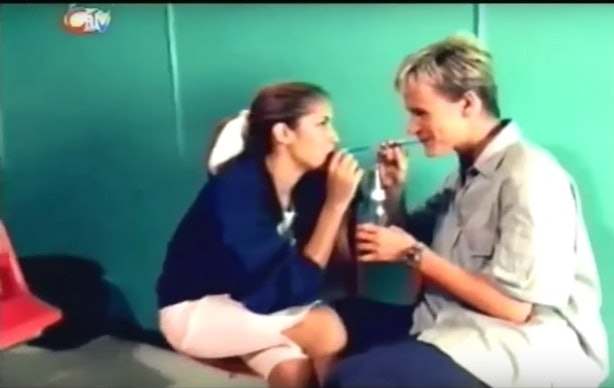 Why did they go back to the ’50s? Probably just because they wanted an a special where they could shoot a music video in an old timey bowling alley and another at a diner. Don’t worry, though. The kept their ’90s fashions, and people in the small conservative desert town by and large did not seem care.

6. You Were Rooting For Paul & Hannah

Though, looking back on it, why? Yes, they were a couple in real life, but, on the show, the chemistry was lacking.

7. Their Manager Was A Former Brady Bunch Kid

Barry Williams (aka Greg Brady) played their manager in the third season.

8. Bradley Was A Total Heartthrob

This is just more of a fact than anything else. Bradley was always getting his flirt on and taking off his shirt in scenes. It was great.

9. Tina Was Definitely The Cool One

Re-watching episodes and clips makes it really hit home that she was probably the most independent of them all.

10. The Show Takes The Power Of Friendship To The Next Level

How many other shows about a group of friends who work together would include so little internal drama? They rarely butt heads for long and instead stand together against the world.

Now, if this show could just come to Hulu or Netflix, then you could really relive S Club 7’s glory days.