Thrifty newlyweds reveal they spent just 1K on their big day – thanks to a £15 second-hand dress, a FREE reception at Wetherspoons and a £2 sponge cake from Lidl

A couple have revealed they spent just £1, 100 on their big day – despite treating their guests to an Indian takeaway and two wedding cakes.

Newlyweds Michelle and John Walton, both aged 50, from the Isle of Wight, were determined to get married cheap and were keen to spend the pennies they saved on a trip abroad or renovating their home instead.

They cut back costs by purchasing a second-hand dress, spending the afternoon in Wetherspoon’s courtyard for free and serving their guests £1 homemade wine.

‘Weddings are just a big con with companies extorting people for what they want to be their special day,’ Michelle told The Sun.

‘This was my fourth wedding and John’s second and we knew we wanted to make it simple and cheap.’ 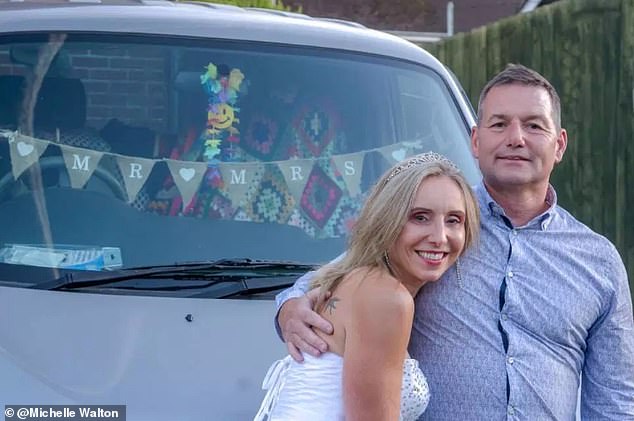 Michelle and John Walton, both aged 50, from the Isle of Wight, were determined to get married cheap and spent just £1, 100 on their wedding day 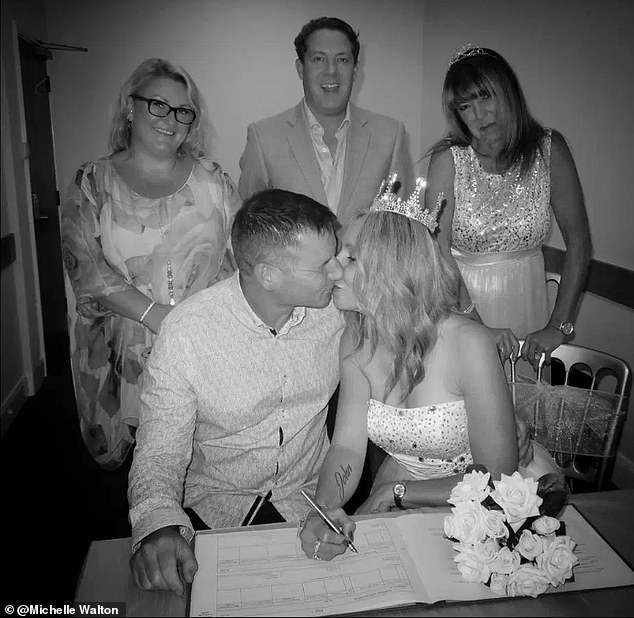 The couple (pictured) held the reception at a local registry office rather than a lavish venue, which saved them thousands of pounds

The happy couple met back in 2013 at work in the police force, but didn’t go on their first official date until three years later – after seeing each other’s profiles on a dating site.

Then, in July 2018, John popped the question in the romantic surroundings of Fort Victoria Country Park on the Isle of Wight.

Before long, they were planning their budget wedding and Michelle headed to a local charity shop to find the perfect second-hand dress.

‘I never even looked at full-priced dresses’, Michelle told the publication. ‘I would have felt dirty doing so.’

The bride-to-be found one for the bargain price of £15 and paired it with white trainers she already owned – and she’s since got her wear out of it as she’s worn it to both a fancy dress party and to take part in a charity run.

John re-wore an old suit and forked out £20 on a new shirt, while Michelle’s only bridesmaid Karen donned a dress she bought for £10 on eBay.

And while Michelle paid just £49 for her wedding and engagement rings, John opted not to buy any altogether, as he isn’t able to wear jewellery due to his job in construction.

‘I went for silver rings with and cubic zirconia because it looks just like platinum and diamonds to me,’ Michelle said. 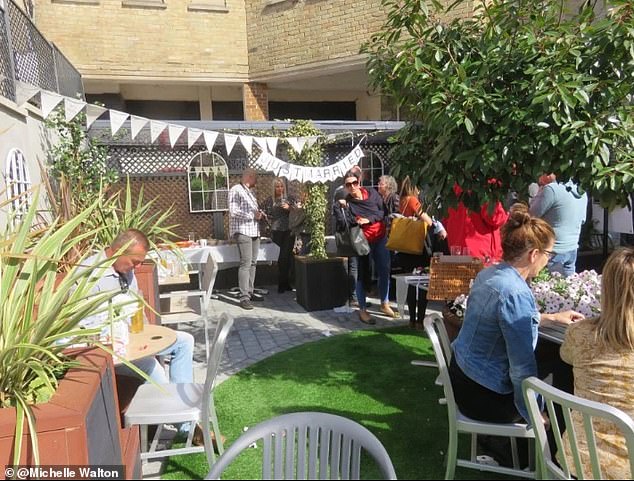 Guests tucked into a lunch time feast at their local Wetherspoon, which cost £600, before spending the afternoon in the courtyard for free 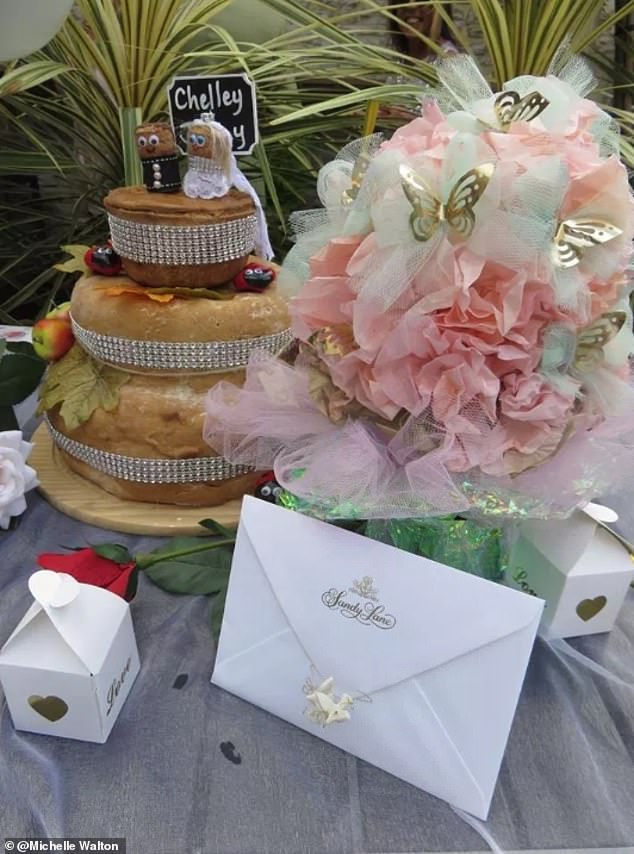 The newlyweds had two wedding cakes – albeit not traditional ones. The first was a savoury pork pie cake at Spoon’s do and the second a £2 Lidl sponge

They also spent £5 on fake flowers and asked their friend to capture the moments from their bargain day – saving the cost of a professional photographer.

But one of the biggest saving was the venue, as the couple held the reception at a local registry office rather than a lavish venue.

The 70 guests then tucked into lunch at their local Wetherspoon, which cost £600, and they hired the courtyard for the afternoon, which was free of charge.

For £5.39 per person, they also ordered meals – including southern fried chicken wraps and ham and cheese paninis, before spending £222 on bottles of sparkling rose and soft drinks.

‘It was such good value,’ Michelle told the publication. ‘There were no pretentious canapes, just nice tasty food, beers, and we had the courtyard fenced off to ourselves.’ 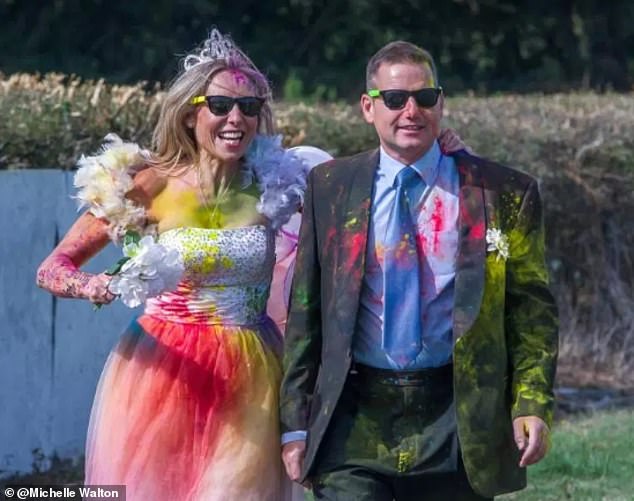 Michelle, who bought her dress from a local charity shop for just £15, has worn it on several other occasions – including to a fancy dress party and to take part in a charity run. John re-wore an old suit but spent £20 on a fresh new white shirt 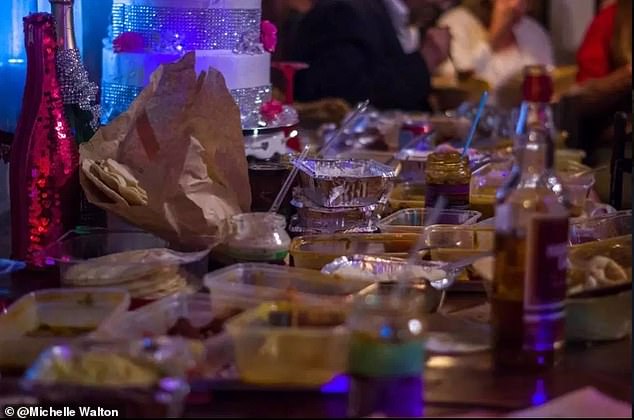 In the evening, guests were treated to a local Indian takeaway consisting of lamb madras, chicken rogan josh, rice, and garlic naans, which came to £200 in total

Saving money right through to the end of the night, Michelle and John hosted the evening party at their home, with 20 of their nearest and dearest.

Curbing any hunger cravings, they ordered a local Indian takeaway consisting of lamb madras, chicken rogan josh, rice, and garlic naans, which came to £200 – and washed it all down with homemade wine which cost as little as £1 a bottle to make.

As for the cakes, the couple had two – a savoury pork pie cake at Weatherspoon and a £2 Lidl sponge.

‘My husband is a Yorkshireman so we had to have a pork pie cake, but only the top of the three layers was real – that was a pork pie from Morrisons,’ explained Michelle.

‘The second two layers were hollow pastry layers I made and baked myself. I then decorated a few wine corks to look like a bride and groom and put them on top – job done!’ 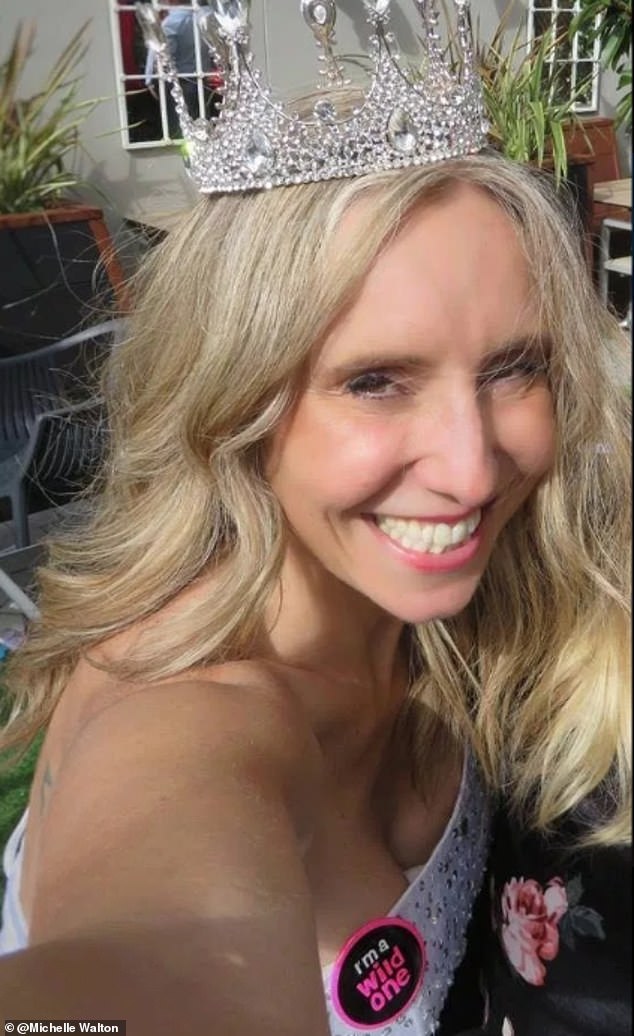 Michelle (above) added a personal touch to the savoury pork pie cake.  Only the top of the three layers was real, as the other two were hollow pastry layers she made and baked herself. She then decorated wine corks to look like a bride and groom and put them on top