TOM UTLEY: Sorry to be po-faced, but I wish TV history would spare us from Danny Dyer dancing in a codpiece

Don’t tell Danny Dyer, the EastEnders actor, but it’s a fair bet that the overwhelming majority of people reading this column are direct descendants of Edward III (reigned 1327-1377).

You needn’t take my word for it. Listen to Dr Andrew Millard, an academic at Durham University and a specialist in such matters, who in 2008 set about calculating the number of the king’s living descendants worldwide.

This was his conclusion: ‘There is an extremely high probability that a modern English person with predominantly English ancestry descends from Edward III, at a very minimum of over 99 per cent and more likely very close to 100 per cent. 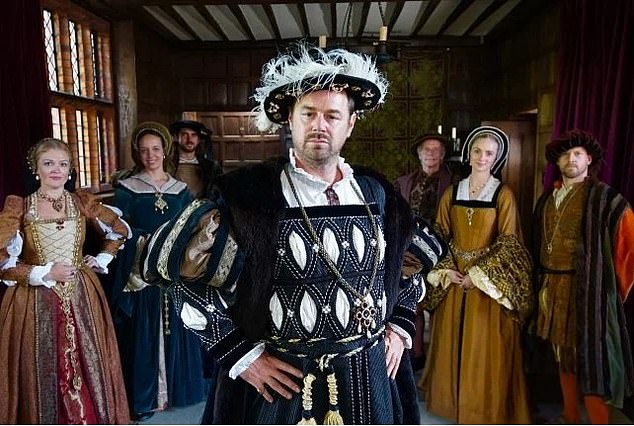 ‘The number of descendants of Edward III must therefore include nearly all the population of England, and probably much of the populations of the rest of the UK and Eire, as well as many millions in the USA, former British colonies and Europe. So 100 million seems a conservative estimate.’

Yet despite this, the BBC chose to make Dyer’s descent from the king — charted in the 2017 series of Who Do You Think You Are? — the basis of a two-part romp through British history, which mercifully ended this week.

In it, the actor sought to sample the lives of his (and almost certainly your) distinguished ancestors, stretching back beyond Edward to Rollo the Viking (circa 860-930 AD), the first Duke of Normandy.

What was so strange about Danny Dyer’s Right Royal Family — heart-sinkingly advertised by the BBC as an attempt to ‘inject fun’ into its factual output — is that never once in the course of these two hour-long programmes did anyone point out that most of the population are descended from Edward and his forebears.

Indeed, it was not clear whether the actor himself was aware of this fact, although I reckon he must have been. Indeed, I find it highly unlikely that Dyer is half as ignorant as he pretends to be. 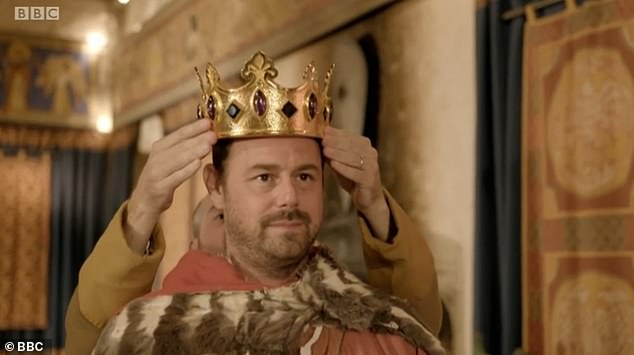 The show is a two-part romp through British history, which mercifully ended this week

What was obvious from the start, however, was that the people at the BBC, in their patronising way, thought it a hilariously incongruous joke that anyone with a broad Cockney accent like his could claim descent from a medieval king.

As for why they failed to disclose that at least 100 million others share this distinction, two possibilities spring to mind.

One is that they realised the whole excuse for the programme would look incredibly flimsy if they revealed the truth.

The other, more charitable, is they assumed viewers would be aware we are all descended from royalty, if we look back far enough in our family trees.

Perhaps they thought it would insult our intelligence if they spelled out the joke. If so, this was the programme-makers’ one and only concession to the possibility that intelligent people might be watching. Indeed, anyone tuning in to seek elucidation about any aspect of our country’s past will have been bitterly disappointed. 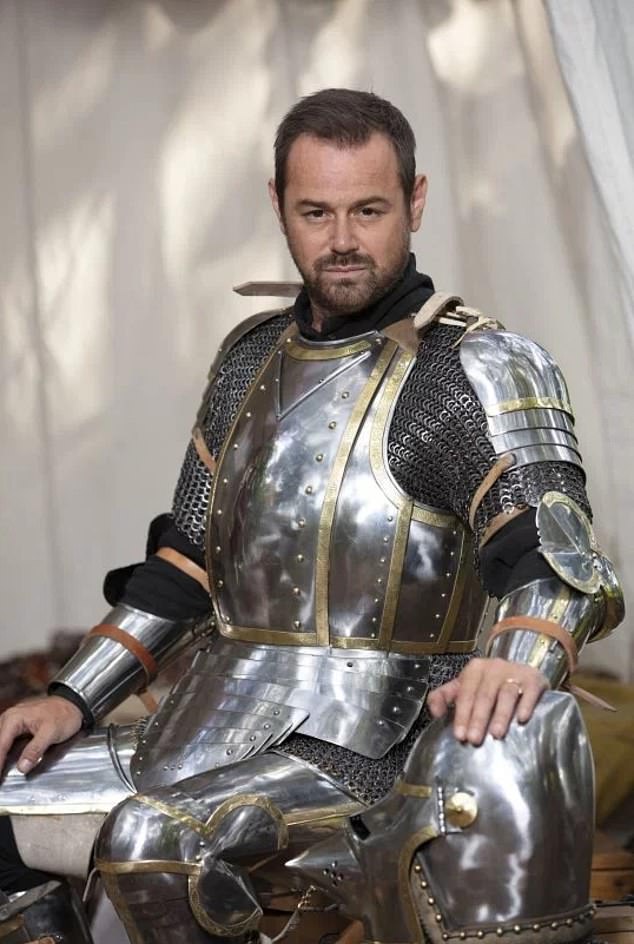 The show came off the back of Dyer’s appearance on the BBC’s Who Do You Think You Are?

Instead, we were doomed to see Dyer dressing up — Robin Hood-style hunting gear, a suit of armour, Tudor and Elizabethan garb — tasting sheep’s tongue a la Viking and singing and dancing in the manner of a 16th-century grandee.

From time to time, he delivered himself of a less-than-penetrating historical insight. For example, here’s his opinion of the Tower of London: ‘What a gaff!’ On Dover Castle, he was even more eloquent: ‘It’s a beautiful gaff. It really, really is.’ Of his ancestress Katherine Cromwell Lady Tollemache, he informed us: ‘The best thing about the time that Katherine lived in is that I get to wear a ruff.’

As for the moment Dyer saw the tunic worn by his 26-times great-grandfather, Louis IX of France, only his favourite word would do to sum up his astonishment. ‘F****** hell!’ he said. And again, when he saw the instrument used by the pious Louis to flagellate himself: ‘F***! That’s unbelievable. Bless you, grandpa, bless you.’ 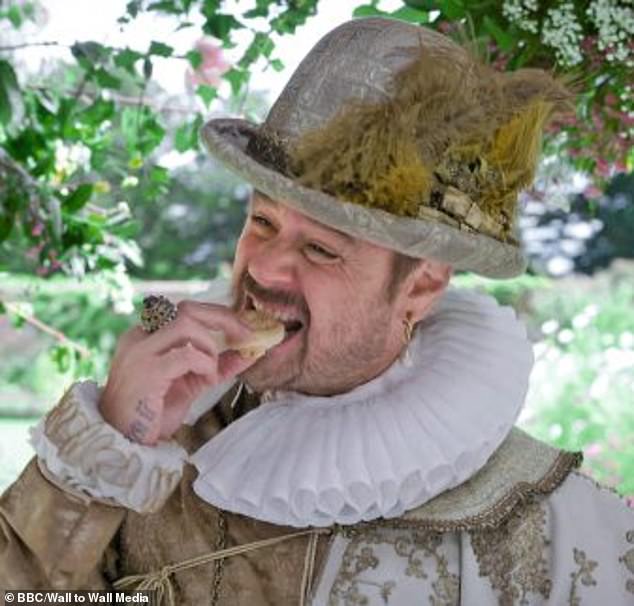 Dyer dressed in Elizabethan finery, attending a sugar banquet in the gardens of Helmingham Hall

Now, I know I shouldn’t get too po-faced about Danny Dyer’s Right Royal Family. For despite the way it was advertised — and the odd ‘seriously, though’ interludes when the actor read out the odd extract from a school textbook — this was never meant to be an educational programme.

No, it was clearly intended as mere light entertainment, designed to cash in on the celebrity culture and the widely acclaimed success of Dyer’s appearance on Who Do You Think You Are? (Whenever the BBC backs a winning horse, it likes to go on flogging it until long after it’s dead.)

I know, too, there are plenty of people who lap up this kind of stuff, loving every moment of Dyer’s portrayal of himself as a simple, plain-speaking, foul-mouthed Cockney who’s a diamond geezer underneath. Indeed, to judge by tweets about the show, viewers seem particularly to have enjoyed his remark when he put on a codpiece and boasted: ‘What’s underneath is Godzilla!’

‘Yes, I do pay my licence fee for Danny Dyer singing in a codpiece, and I am PROUD,’ wrote Penny C.S. Andrews — one of many who seem to have found the programmes side-splitting.

But what I find profoundly depressing, as a lover of history, is that so much of the BBC’s output on matters historical — even supposedly heavyweight programmes — is pitched at roughly the same dumbed-down level as Danny Dyer’s Right Royal Family. 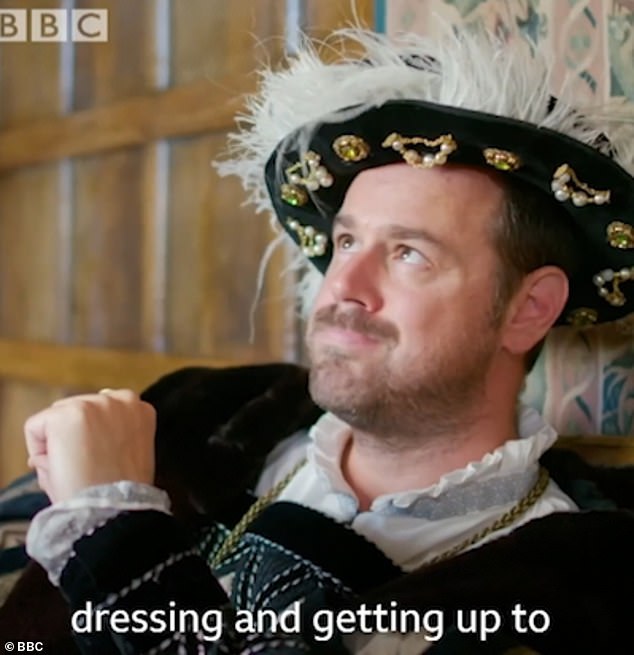 The number of descendants of Edward III must include nearly all the population of England, an expert said

It’s as if the Corporation believes history — in my book, the most fascinating subject of all — is fundamentally boring, and needs to be jazzed up with bells and whistles to make it palatable to you and me.

For a start, it seems to be a BBC rule that every presenter of history programmes must have at least one peculiar mannerism or eccentricity. I’m thinking of Simon Schama’s wobbly head and wild gestures, or the classicist Mary Beard’s bag-lady appearance and tendency to address her audiences as if we were five-year-olds.

Then there’s Lucy Worsley, the one who has twouble pwonouncing her Rs, who is forever being made to dress up in period costumes — pwesumably hoping to add colour to the thousands of pwogrammes she pwesents.

Other distractions include those countless shots, from different angles, of presenters driving from one location to another — surely a shocking waste of airtime, adding nothing to the story they’re trying to tell.

Worst of all, perhaps, are the constant historical ‘reconstructions’, in which bit-part actors raid the BBC’s dressing-up box to pose unconvincingly as kings and queens, Roman senators, Prussian armies or French revolutionaries, to the accompaniment of dramatic music, galloping hooves or gory battle scenes, decorated with gallons of tomato ketchup.

Did you catch Andrew Marr’s History Of The World? For me, its intelligent script was trivialised and utterly ruined by those dozens of absurd re-enactments of events from the past.

Meanwhile, no interviewee is allowed to speak for more than five seconds at a stretch, before the camera jumps to another scene.

Yes, I understand the theory that today’s viewers have desperately short attention spans, which make them unable to focus on anything longer than a politician’s four-second soundbite or a 140-character tweet. But isn’t it just as likely that we have trouble concentrating because TV programme-makers never give us the chance to try for more than a few seconds?

Oh, for a return to the days when that great historian, A.J.P. Taylor, could speak straight to camera for an hour — without notes, reconstructions, period costumes or audio-visual aids of any sort — and yet keep his audiences enrapt.

Have the descendants of Edward III (all 100 million of us) really changed so much that we can’t manage anything more intellectually challenging than Danny Dyer’s antics with a codpiece?