Tracee Ellis Ross Wants to Be Chosen By the People at the PCAs: See the Star of black-ish React to Her Nomination 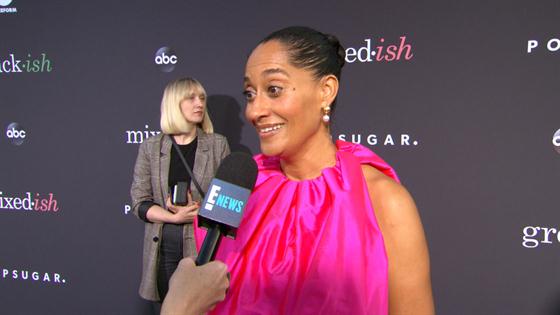 Tracee Ellis Ross is all smiles over her E! People’s Choice Awards nomination!

E! News caught up with the star on Tuesday in Los Angeles at the red carpet for black-ish, grown-ish and the upcoming new series mixed-ish, a spin-off that focuses on Ross’ character Rainbow and her upbringing in a mixed-race family during the ’80s.

The actress, who is up for The Comedy TV Star of 2019, was so excited about being nominated saying, “When the people choose you, it’s top of the line.”

“That’s what you want, you want to be chosen by the people,” she continued. Last year, Ross was up for the same award, so it’s up to the people’s votes to decide if she walks away with the trophy this year.

In other great news for the cast, Yara Shahidi—who plays Ross’ on-screen daughter in black-ish—was also nominated for Comedy TV Star and her spin-off show, grown-ish, is up for The Comedy Show of 2019.

If you want to see both nominees in action before casting your ballots, have no fear. ABC brings back black-ish and is premiering mixed-ish on Sept. 24 with Freeform bringing back grown-ish later this year as well.

Head to the PCAs voting site or take to Twitter and sound off on who you want to see ultimately win the award.

Be sure to tune into the live show on Nov. 10 to see the winners in the 43 categories that cover movies, TV, music and pop culture.

To see the full interview with Ross and more cast members, tune into E! News at 7 p.m.