Strange Angel is not rocket science. Well, technically the plot involves rocket science, but the new CBS All Access series is so much more and rooted in a largely unexplored corner of history. Strange Angel is based on a true story, and primarily adapted from George Pendle’s book Strange Angel: The Otherworldly Life of Rocket Scientist John Whiteside Parsons. The source material is the kind of bizarre but authentic story that you won’t believe hasn’t been told a thousand times over.

According to an official press release from CBS All Access, the series "explores the dramatic intersection between genius and madness, science and science fiction. The story follows the life of Jack Parsons, a mysterious and brilliant man in 1940s Los Angeles, who by day helps birth the entirely unknown discipline of American rocketry, and by night is a performer of sex magick rituals and a disciple to occultist Aleister Crowley."

The term "sex magick" refers to the practice of harnessing sexual energy and orgasms to do spells, per Vice. And the real Crowley, per The Guardian, was sometimes called the "wickedest man in the world" by the press that covered his various exploits. It doesn’t appear as though the CBS All Access series has cast their version yet.

There really was a man by the name of Jack Parsons who built rockets by day and dabbled in dark magic by night, according to the Los Angeles Times. (You know, as one does.) He was a self-taught chemist, one of the founders of the Jet Propulsion Laboratory, and definitely worshipped the devil. The same outlet also reported that Parsons used to host orgies at his Pasadena mansion. Per Vice, he died in an explosion in his own home laboratory in 1952. In the show, the scientist is played by Jack Reynor, who you may recognize from Sing Street and Macbeth.

A few details from Parsons’ history seem to have been changed for the series. In real life, his wife was named Helen, per Wired, whereas Bella Heathcote plays Susan Parson on the series. Rupert Friend’s character Ernest Donovan does not appear to be based on a real person at all. Perhaps he represents a few mysterious figures from Parsons’ past combined.

According to an interview with CBS, actor Keye Chen’s character Gui Chiang is based on the real-life "Father of Chinese Rocketry," and according to the LA Times that title belonged to a Caltech rocket scientist named Qian Xuesen. He was deported from the United States in 1955 due to Communist suspicions but was an undisputed genius and also helped found the Jet Propulsion Laboratory alongside Parsons.

So while it seems as though some names have been changed for the television adaptation, most of the main characters appears to be based on real people who Parsons may have encountered during that decade. 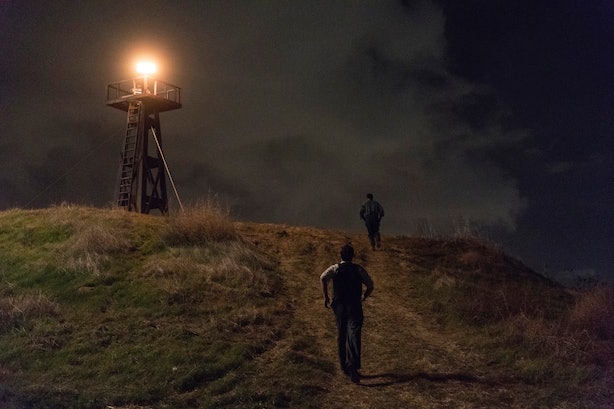 The title of the series also has roots in real life. According to executive producer David Digilio in an interview with CBS, the phrase is "based on the title of a painting by Marjorie Cameron." He continued, "It’s one of these kind of amazing lost relics of art. Jack Parsons as an angel. This is a guy who clearly represents a duality of man and she really captured that in that image." That image, a portrait of Parsons titled Dark Angel, inspired the author of the book on which the show is based, as well.

Cameron, according to the LA Times piece cited above, was Parsons’ lover after he separated from his wife. Maybe a dramatized version of the painter and that bit of drama will pop up in Strange Angel Season 2 or Season 3. And this true story has the potential to go even deeper. Not only is Parsons a fascinating figure, but Los Angeles in the ’40s is usually associated with Hollywood glamour. This story is showing a few sides of that world that we don’t see in old movies.

Strange Angel is just getting started, and so it will be interesting to see which direction the season takes and whether or not it will keep drawing from real life or embark on an even stranger path. Honestly, even if only 10 percent of this story were true, it would still be hard to believe.