Former girl band member, 53, whose ex-partner told her she’d never amount to anything and overworked factory manager, 50, are unrecognisable after ‘sexy’ makeovers on 10 Years Younger in 10 Days

Deborah, 53, a former performer turned campsite manager, said she had neglected herself from the moment her former partner left her with their two daughters to look after.

After starting her own camping site, Deborah was more comfortable behind the wheel of her faithful digger than she was in a pair of heels, and she said she felt like a ‘tramp.’

Meanwhile single mother Umi, 50, felt ‘drained’ as she balanced life as a busy factory manager while caring for five children.

At the start of the show, an experiment found that both were thought to be much older than their actual ages by a panel of strangers, with passers-by guessing Deborah’s age at 63, ten years older, and Umi’s at 56, six years older.

Thanks to the expertise of 10 Years Younger’s stylist, hair, make-up and dentistry specialists, they both emerged looking much younger and happier.

Viewers were amazed by the transformations, with one commenting: ‘Genuinely contemplating applying for ’10 years younger in 10 days.’ These transformations are amazing. I want one!’ 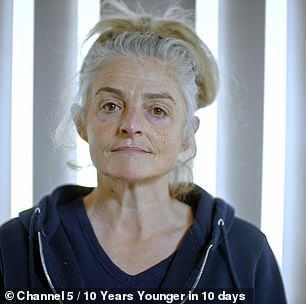 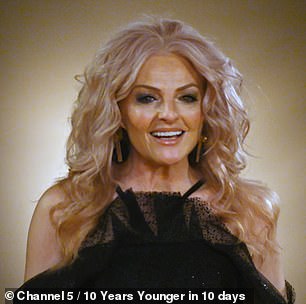 Viewers were blown-away by the makeovers on last night’s 10 Years Younger in 10 Days after Deborah, 53, was transformed on the show  (pictured left, before the makeover started, and right, after)

Deborah had faced hardships in her life which meant all her time went into her work and her family, and she was left with no time to spare for herself.

She revealed: ‘Thirty years ago, I became a single mum of two girls. It was a bit of a shock, I didn’t sign up for that, but things can happen.

She said her ex-partner had told her she would ‘never be nothing and no-one’ before he left her.

But hardworking Deborah didn’t let this blow weaken her determination to make something of herself. 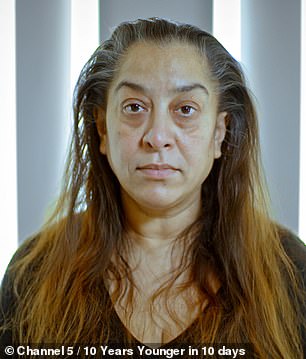 Umi, a factory manager and mother-of-five from London, 50, said she felt ‘drained’ and was pestered by comment of well-meaning people telling her she looked tired (pictured before)

‘I wanted to show my children that hard work pays,’ she said.

She bought a playing field and turned it into a campsite and worked for years cleaning the toilets and looking after the estate.

She said: ‘Everything has been hand built by me and Allen, my partner, it took us 20 years, but we got there in the end.

Meanwhile Deborah’s daughter Jasmine said her mother was always working, explaining: ‘Around the campsite, they call her Digger Debbie. It has really taken it out of her, to be honest.’ 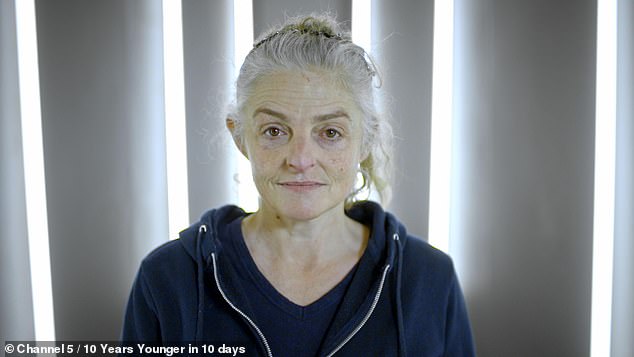 Before her transformation, pictured, Deborah admitted she had neglected her looks in order to put others first

Deborah’s mother Carol agreed, saying: ‘She needs to think about herself rather than other people.’

Her appearance had left Deborah feeling self-conscious and she revealed:  ‘I feel terrible, like a tramp, I need to do something.’

A poll showed strangers guessed Deborah’s  age was 63, ten years older than she actually was.

She said: ‘It’s my own fault. I’ve not been taking care of myself for the past 30 years. It’s been about everyone else, I feel I’ve neglected myself.’

Her first appointment was with facial professional Dr Tapan Patel, who used light amount of Botox and fillers to restore Deborah’s skin and redefine her jawline in a bit to make her look younger. 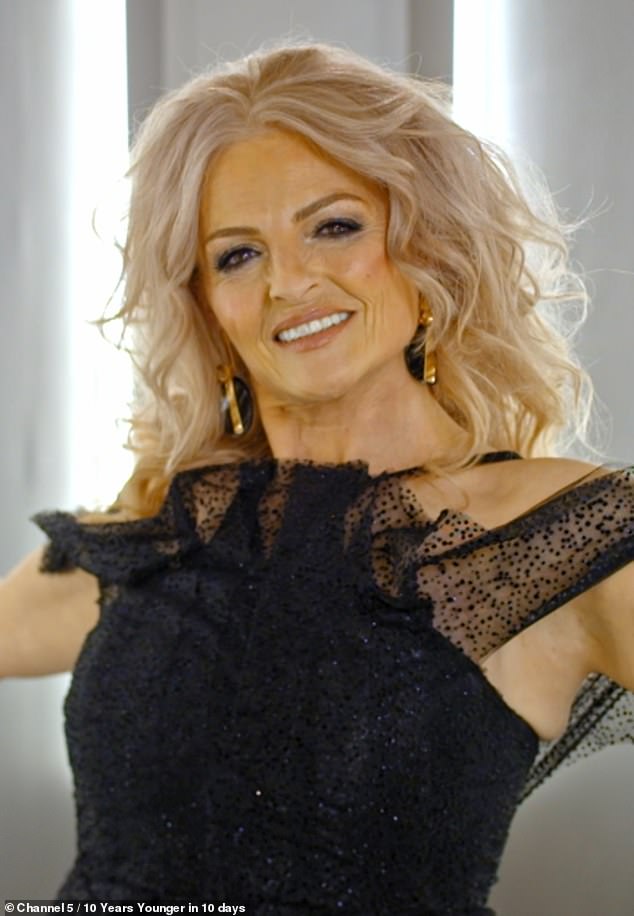 After her transformation, Deborah said she was blown away by the results of the work she’d had done (pictured)

The mother-of-two cried when she saw her face after the treatment, saying ‘I look alive and younger.’

After this first step, Deborah felt ready to take on the rest of the makeover, and met with cosmetic dentist Uchenna Okoye.

The mother-of-two was self-conscious about her smile, which had been damaged by years of grinding.

She said: ‘My teeth, they’re horrible, I would love a lovely smile. A lovely smile, I think, is the prettiest thing you can wear.’

To hide the results of Deborah’s grinding, Dr Uchenna used porcelain veneers to even her teeth out and restore her smile.

Delighted with the results, Deborah vowed never to stop smiling ever again. 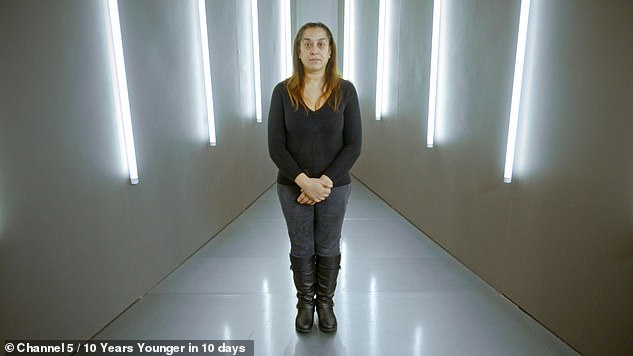 Meanwhile mother-of-five Umi, pictured before, wanted to feel fabulous and glamourous, and reignite the sparkle she had lost

Feeling empowered by the results of her makeover, she had a style masterclass from stylist Gemma Sheppard, who showed her how to infuse some glamour into her daily wardrobe.

And makeup artist Hannah Martin added some glow to the mother-of-two’s skin with some bronzer, concealer, and highlighted her sparkly gaze with some mascara and eye-shadow.

When the ten days came to a close and it was time to reveal her new appearance, Deborah said she felt ready to take on the world.

She revealed: ‘I’m going to be a new person, I can feel it coming, make room, make way, Deb’s coming.’ 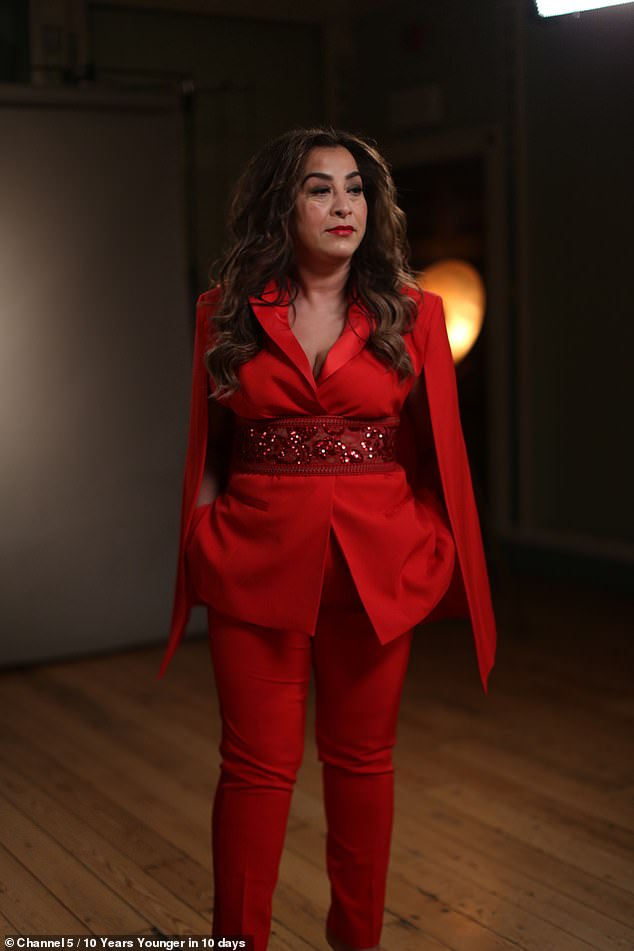 Deborah was left speechless by the transformation, revealing: ‘I feel absolutely gorgeous. I feel like a celeb, like the Deb that once was.’

And her family was equally impressed, with her daughter Jasmine saying: ‘She was always our rock, now she’s our glamourous rock.’

Meanwhile, factory manager Umi, from London, also underwent a glamorous makeover on the show after she’d been left tired from her busy schedule.

She revealed: ‘The shift work, it does affect me, people tell me “you always look tired.”‘

‘It leaves me quite disheartened, and makes me think, “Does my face look that bad”.

‘It makes you feel worthless, and it makes me not feel good about myself.’

On top of her demanding job, Umi had to look after her five children who still lived with her and husband.

The general public guessed that her age was 56, leaving Umi feeling dismayed. 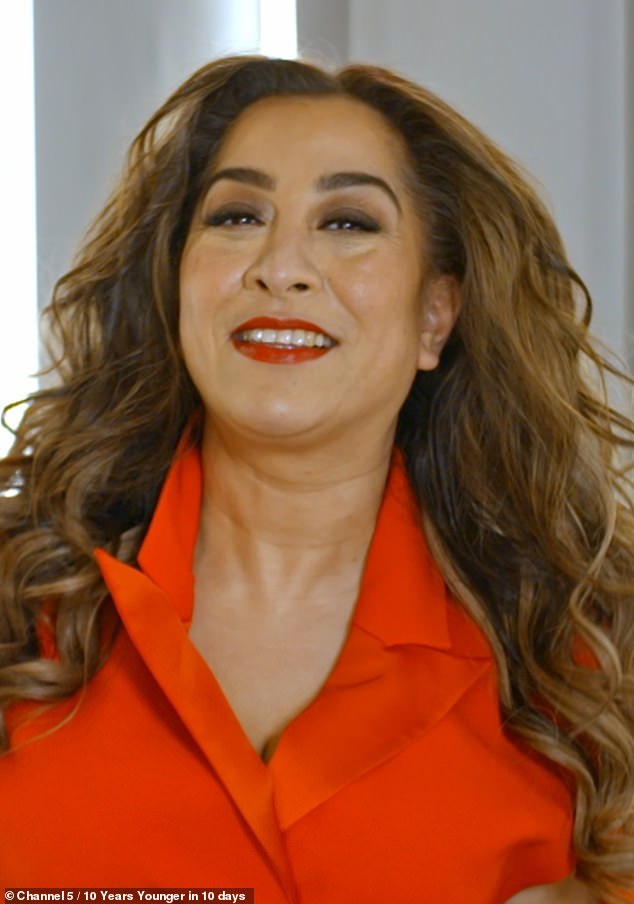 After 10 days of pampering, Umi said she couldn’t wait to go out and show the world how good she looked (pictured after)

She told Cherry: ‘I’d like to look a bit more sophisticated and not so drained, when I see myself in the mirror, it actually upsets me.

‘It makes me feel down, it is a big problem.’

Umi’s first appointment was with the hairdresser, where she explained she had started to lose her hair.

She said she hoped to get a little ‘sparkle back’ in her hair, revealing: ‘In our culture, most of the girls that I know have beautiful long silky hair down to their bums.’

John explained that because Umi had her hair pulled back into a ponytail everyday, it had damaged the follicles, and that she needed some extension and waves in her hair to mask the problem.

The mother-of-five went on to meet with skin expert Nilam Holmes to treat the bags under her eyes.

She said: ‘When I look in the mirror, I do feel disappointed sometimes when I see the dark circles and saggy skin under my eyes, it makes me feel very self-conscious.’

Nilam treated Umi with a laser treatment to brighten and tighten her skin, before she went on to meet with a makeup artist, who told her how to apply under-eye concealer.

Hannah called it a ‘complete game changer’, saying: ‘It’ll make you look like you’ve got 8 hours of sleep when you haven’t.’

Viewers confessed they were blown away by the results of the transformations, with one saying they needed a makeover after lockdown

Umi was completely speechless as the results of her makeover were unveiled.

She said: ‘I feel very fabulous, I do. I look so different, it doesn’t feel like me.

‘It’s brought out the real me, the bright, fashionable, sexy-looking Umi.’

Umi was hopeful to keep her new appearance up, saying: ‘I think the kids do let me pamper myself from now on, so they’ll understand I need more me time.

‘I feel very excited, I actually feel so confident about the way I look, I just want to go out and show everybody how good I look.’

Viewers said they were blown away by the results of the transformations, with one saying: ‘Wow, Um looks amazing, red really suits her.’

Another wrote: ‘Lockdown has done me in. Make me 10 years younger goddamit.’

10 Years Younger is available on My5.