As part of its efforts to wind down a Trump-era policy that kept tens of thousands of asylum-seekers outside U.S. territory, the Biden administration on Friday admitted the first group of migrants who had been previously required to wait in Mexico for their immigration court hearings.

U.S. border officials processed 25 Latin American asylum-seekers at the San Ysidro port of entry in southern California and allowed them to stay in the country for the duration of their proceedings.

The Jewish Family Service of San Diego received the asylum applicants, who were required to test negative for the coronavirus, and transported them to a hotel in the area so they could quarantine, according to the non-profit’s chief executive officer, Michael Hopkins. The group included six families and five individuals from Honduras, Peru, Nicaragua, Guatemala and Cuba.

“It’s the beginning of a new day for our country,” Hopkins told CBS News. “The Remain-in-Mexico program was in many ways inhumane.”

A U.S. government asylum officer who has interviewed people enrolled in the Trump-era policy praised the Biden administration’s effort, saying migrants allowed into the U.S. will now “have their claims fairly adjudicated.”

“Today was a day filled with hope. We finally saw 25 people be welcomed with dignity,” Taylor Levy, an attorney who has helped dozens of asylum-seekers who were returned to Mexico, told CBS News. “It’s such a wonderful sigh of relief that finally, at least for the 25 people, there is going to be justice and hope.” 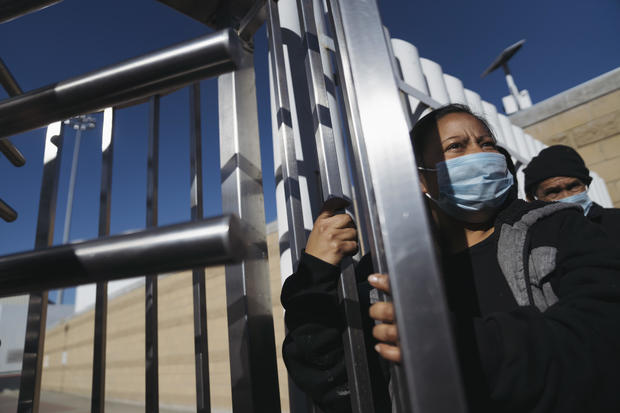 To deter U.S.-bound migration, the Trump administration in 2019 enacted a program it dubbed the Migrant Protection Protocols (MPP), which ultimately led to more than 70,000 non-Mexican asylum-seekers being sent back to Mexico to await their U.S. court hearings.

Many were returned to places in northern Mexico plagued by violence and crime and waited months and even years for their U.S. court hearings while in squalid migrant tent camps. The largest camp is in Matamoros, Tamaulipas, an area the U.S. State Department warns Americans not to visit.

The group Human Rights First documented more than 1,500 reports of assault, kidnapping, rape, threats and even murder against migrants the U.S. returned to Mexico under the MPP policy, according to a list updated Friday.

The chances of securing legal assistance also proved to be slim for most migrants returned to Mexico. More than 65,000 of the asylum-seekers subjected to the policy did not have lawyers representing them in court, according to government data compiled by the Transactional Records Access Clearinghouse at Syracuse University.

The Department of Homeland Security stopped placing asylum applicants in the MPP program shortly after the inauguration of President Biden, who strongly denounced the practice during his presidential campaign.

The admission of 25 asylum-seekers in California on Friday marked the start of a new process the Biden administration created with the help of non-profits, international groups and the United Nations refugee agency to gradually take in migrants with pending Remain-in-Mexico cases so they can stay with family or friends in the U.S.

An estimated 25,000 people could be eligible for phase 1 of the process, but the number of asylum-seekers that will be admitted during this stage will likely be less as many migrants with pending U.S. cases left Mexico and returned to their home countries.

Recently apprehended migrants who were never enrolled in the program are not eligible for this process and continue to face rapid expulsion under a Trump-era public health order the Biden administration has retained for now.

The U.S. is set to start processing more eligible asylum-seekers in the Texas’ Rio Grande Valley on Monday and in El Paso later next week. Once fully operational, ports of entry at these initial locations are expected to process roughly 300 migrants per day. 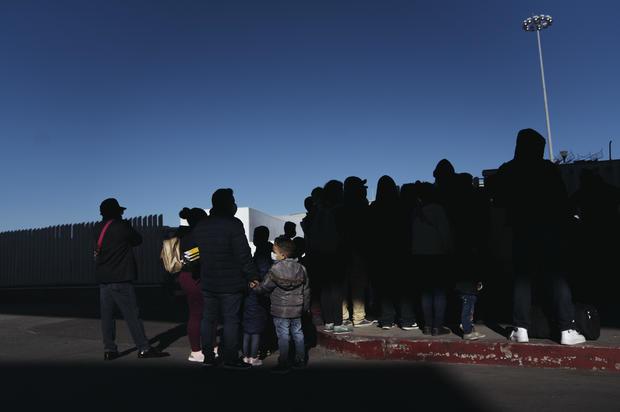 On Friday, the United Nations refugee agency unveiled a website where eligible migrants can register to receive an appointment to enter the U.S. DHS has said it will prioritize the admission of asylum-seekers who have waited in Mexico the longest, as well as those who are medically vulnerable or who face imminent danger.

The Biden administration is requiring all migrants to test negative for the coronavirus at staging locations in Mexico before being allowed into the U.S. Asylum-seekers who test positive will need to isolate in Mexico for 10 days. After completing that isolation period and not experiencing fever for 24 hours, those individuals could again be considered to enter the U.S., the State Department said Thursday.

DHS has said asylum-seekers allowed into the U.S. under the Remain-in-Mexico drawdown will generally not be sent to detention centers. Instead, they will be referred to local shelters and groups like Jewish Family Service so they can access temporary housing before leaving for their respective destinations in the U.S.

Hopkins, the CEO of the Jewish Family Service in San Diego, said his group plans to continue using hotels to provide temporary housing for asylum-seekers. Through private donations and funds from California and the federal government, Hopkins’ group will be offering newly admitted migrants clothing, food, other necessities like diapers and help arranging transportation.