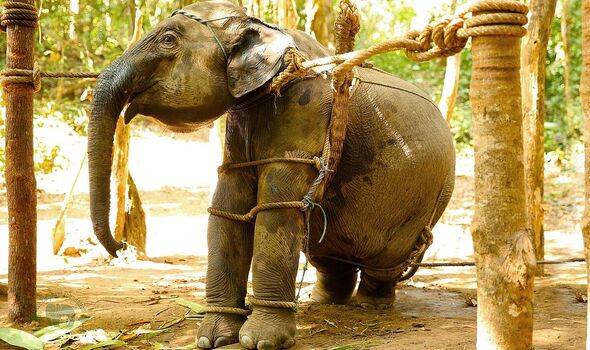 And tourists from Britain unwittingly play a part in their torment. There are more than 200 unethical elephant venues in Thailand where visitors demand selfies with these majestic animals or clamber aboard their backs to ride through the jungle.

Elephant-related tourism in Thailand is a £415million-a-year industry and is based on stealing calves from their mothers and breaking their spirits with sickening cruelty before turning them into photo opportunities.

Despite the savage treatment, a proposed UK government ban on the promotion of holiday venues abroad where elephants are abused was paused earlier this year.

The process where the calves are taken to secret training camps, beaten, starved and tortured is called “pajan”.

Step one is for the beasts to be forced into a kraal or “crushing cage”. This is a wooden structure designed to keep the elephant so tightly caged it cannot move.

Trainers then starve the animal and keep it awake for days on end, before beating it with wooden weapons designed to inflict as much pain as possible.

The animals endure this brutality for at least six months, all day, every day until their spirit is so broken that they fully submit to the trainers.

About half die in the process while the rest give rides for tourists, perform tricks in shows or are gaudily dressed for parades.

The Express went to Thailand on a mission to uncover the suffering of elephants.

One of the last stops on the trip was to Khao Kheow Open Zoo in Chon Buri where they are cruelly made to dance underwater while bobbing their heads above and below the surface.

On the other side of the glass, hundreds of men, women and children sit in the crowd cheering at the acrobatics and filming it on their phones.

Many are on the brink of death and beaten with a bullhook. With its metal spike and curved blade, this weapon would not look out of place on a medieval battlefield.

Signs at Khao Kheow said their elephants were chained as a safety measure for the public “because they can be very aggressive”.

They even stated that they are doing this as “animal welfare” is the zoo’s “first priority”.

The reality is very bleak, with numerous elephants swaying from side to side, an indicator of stress and ill health, and chained up with barely any room to move.

But at least 1,200 UK firms are promoting 277 venues and profiting from elephant torture.

Campaigners at Save The Asian Elephants (STAE) are demanding a ban on UK firms marketing holiday venues that exploit elephants.

The Animals Abroad Bill was intended to ensure that cruel animal practices overseas were not supported by UK consumers.

However, the Bill was dropped from this year’s Queen’s speech, despite former Prime Minister Boris Johnson’s pledge to tackle animal cruelty. The Private Members’ Bill, tabled by Tory MP Angela Richardson, is due for a second reading in February.

The Bill, first introduced in June, would also ban live exports, and imports of hunting trophies, fur and foie gras.

STAE has spent the last three months campaigning for Rishi Sunak’s government to support these changes in the law and has received overwhelming backing from the public.

Duncan McNair, CEO of the organisation, said: “Support for a ban on such adverts promised by the Johnson administration runs across all boundaries of faiths, politics and the public, the latter now at 95 per cent.

“Will the Sunak government prove the sincerity of its declared support by backing the Animals (Low Welfare Activities Abroad) Bill, due for a second Commons reading on February 3?”

Elisa Allen, PETA’s vice president of programmes, said: “A jumbo thank-you to the Daily Express for telling travel firms there’s no excuse for elephant abuse! Elephants perform uncomfortable, confusing, and even painful tricks and give rides only because of training that involves fear and harsh punishment.

“They endure lives of total domination and exploitation, often denied food and water for many hours and kept in shackles, unable to take more than a step in any direction, when they’re not being forced to do something for human benefit.

“Our government must bring forward the promised Animals Abroad Bill, which would ban tour operators from advertising cruel animal attractions and experiences, including elephant rides.

“Meanwhile, PETA urges tourists to vote with their wallets and leave wild animal attractions off their itineraries.”

“We know animals that are part of tourist attractions are often subjected to cruel and brutal training practices – and we encourage access to research so holidaymakers can make informed choices that benefit wildlife.”

“If you can hug, ride, touch or take a photo with a wild animal, the chances are it has suffered some kind of cruelty.

“Wild animals are not ours to exploit. They belong in the wild.”